Share All sharing options for: Diamondbacks 1, Brewers 3: Signal Not Found

The Diamondbacks went into Milwaukee this afternoon, looking for a rare road sweep. Josh Collmenter went to the mound for us, and though he started off his career as a starter strong, he's had problems in his last few outings. Could we hope for some more success from him, or have teams started to figure out his tomahawk delivery? Could our offense continue to pound on the Brewers pitchers like they were Brett Favre caught by a blind-side blitz? Could I have forced that Wisconsin-related metaphor any more? Well, there's only one way to find out*.

It all started so well. Kelly Johnson came to the plate to start the game, and took a 2-0 pitch from Yovani Gallardo and crushed it deep to center field, just over the wall and out of the reach of Nyjer Morgan. Before many of us had even finished typing the URL for the game, KJ put us up 1-0 with his 15th home run of the season. Gallardo wasn't shaken by that, though. He quickly responded by striking out the next three batters, and a 1-2-3 inning from Collmenter in the bottom of the first was the first sign we were in for a pitcher's duel today. When Collmenter worked around a leadoff Prince Fielder single to keep the Brewers off the board in the second, you could see they weren't having much luck squaring up off of him.

The DBacks threatened to score again in the third, thanks to Gerardo Parra putting up a leadoff single of his own. Collmenter followed that up with a sacrifice bunt to advance the runner, and when Parra took third on a wild pitch, we had a runner 90 feet away, with just one out. Unfortunately, a good grab of a line drive by Rickie Weeks and a swinging K by Stephen Drew meant Parra wasn't able to get any closer than that. The Brewers made their own move with a single by Nyjer Morgan in the bottom of the third, but a perfectly called pitch out and a great throw to second had him out easily.

The next few innings went quickly- 1-2-3, up and down for both sides in the fourth and fifth innings, and while both teams got runners on in the sixth, they never went any further than first base. At that point, Collmenter's day was over, leaving him with a pretty nice line of 6 innings, three hits, one walk, and no runs allowed. That's the sort of outing you'll always be glad to see from a start on the back end of your rotation.

With Collmenter done for the day, we went to the bullpen. And that's where things started to go wrong. Joe Paterson came in and struck out Prince Fielder. Great. But then he followed that up by giving up back to back singles to Mark Kotsay and Jonathan Lucroy, a suspected Death Eater. As we all started hoping fervently for a double play, Gibson went to the bullpen again and the Brewers went for a pinch hitter. The Diamondbacks sent up Sam Demel, Brewers sent up Casey McGehee, and McGehee sent a pitch to deep right center. Brewers up 3-1.

After that point, there wasn't much more to see. No more baserunners in the game, as the Diamondbacks and Brewers both felt they had somewhere better to be. The Diamondbacks struck out in five of their remaining six at-bats, and the end of the game just felt dispirited. 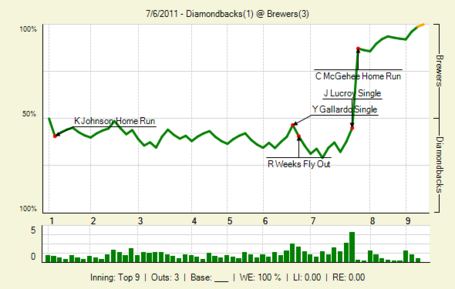 A fairly active thread for a game that started at 11 am, local time, and wasn't aired on local television. Many of us huddled around radios or laptops to follow the details of this unfortunate match, and we ended up somewhere shy of 900 comments by the time things were all done. Bryan J. Boltik led the comments, with imstillhungry95 and justin1985 trailing behind him. Also stopping by were rfffr, hotclaws, piratedan7, kishi, Backin'the'Backs, diamondfacts, Bcawz, Rockkstarr12, blue bulldog, Turambar, SongBird, 4 Corners Fan, Clefo, xmet, Amit, blank_38, pygalgia, snakecharmer, SenSurround, Cup Noodles, NASCARbernet, oldspartan, txzona, TRTFSHR, and BattleMoses.

Only two comments went green, so today's Comment of the Day goes to Bryan J. Boltik for this:

So we leave Milwaukee with a series win, but still feeling slightly disappointed at the outcome. The Padres and Giants face off tonight, and the Diamondbacks make their way to St. Louis to face off against the Cardinals and their cyborg first baseman.

*(Re: the metaphor thing. I totally could have forced it more. Don't try me.)