Share All sharing options for: Diamondbacks 7, Brewers 3: Who's Afraid of Randy Wolf?

Who's afraid of Randy Wolf? If you're a Dbacks fan or player, it's not an unreasonable fear. In his career, Wolf has more wins against the Diamondbacks (10) than almost any other team. (12 vs. the Mets, 10 vs. the Reds) The Dbacks' offense, however, provided some leftover fireworks on July 5th by scoring 7 runs in the first 3 innings. On the heels of yesterday's outburst, apparently, the Dbacks decided to forgo the comeback and go straight to the win. Details after the jump.

Tonight's explosion was another team effort. Ten players got hits yesterday, 5 of them with more than one. In tonight's game, eight players reached via hit at least once, with both Parra and Upton with two hits each. The team also became the first to beat Milwaukee in back-to-back games at Miller Park this year -- albeit without Ryan Braun, but that doesn't show up in the standings.

Willie Bloomquist grounded out to lead off the game, then Kelly Johnson and Justin Upton singled, followed by a walk by Chris Young. Miguel Montero singled for a quick 2-0 lead, Xavier Nady drove in a run on a groundout, and Gerardo Parra, in a rare start against a lefty, got the first of two hits against Wolf. While Parra was thrown out trying to stretch the single into a double, the 4 runs would be all the offense the team would need.

Not that it stopped them from going back to work in the 3rd. Prince Fielder had singled in his Home Run Derby buddy Rickie Weeks -- yup, he of the average 13 home runs per Major League season -- in the bottom of the first after Weeks had drawn a leadoff walk. That 3 run margin was not nearly enough for comfort with Zach Duke pitching, so our corner outfielders both hit home runs, Parra's driving in Nady. Diamondbacks 7, Brewers 1. The offense wouldn't score another run all day.

A Fielder solo shot made it 7-2 in the 6th, and when Aaron Heilman came on in the 8th, a one out solo homer by Corey Hart provided the final margin. Heilman pitched around a single and walk to get out of it. Despite warming up David Hernandez, (AGAIN) Kirk Gibson sent out Alberto Castillo, and when Castillo gave up a 2 out single and walk, Hernandez came in to get a fielder's choice (not Fielder's, who was stranded in the on-deck circle as the tying run) for the save. (Fun fact: Ron Roenike had Yuniesky Betancourt batting 5th today, providing lineup "protection" for Prince Fielder. Betancourt has a 61 wRC+ this season, went 0-3 today, and has never even posted above an 88 wRC+ over a season. For a point of reference, Sean Burroughs has a wRC+ of 69 this season. Could you imagine the outcry if Kirk Gibson batted Sean Burroughs 5th?? But I digest)

Despite allowing the "unanswered runs" streak to end at 12, Zach Duke finally had another effective outing, giving up fewer than 3 runs for the first time since his June 8th return to Pittsburgh. Duke finished with a "job-saving" (thanks, Nick Piecoro!) line of 7 innings, 5 hits, 2 walks, 2 runs and a strikeout. Can't be too happy with a 1K/2BB ratio, but at least some of Duke's horrible luck regressed today: despite opponents hitting with a .397 BABIP against Duke coming into this game, 4 hits on 24 balls in play today would be a .167 BABIP. Duke also snapped another streak: in 11 previous starts at Miller Park, neither Duke, nor his team, had ever gotten a win. At the plate, Duke got his 3rd hit of the season and his first non-homer, reaching via hit for the first time since June 13th. After no starter wins over 7 games from June 24th through July 2nd, our starters have won two of the last four. Those starters, of course, are Dbacks co-aces Zach Duke and Joe Saunders.

Parra's home run was his 5th of the season, a total he reached in 2009 with 232 more plate appearances. After dipping to below 4% last season, Parra's hitting home runs this year in 7.9% of his fly balls, and hitting more of them -- over a 3rd of his balls in play travel through the air. He probably won't hit double digits homers this season, but there's certainly the chance that this continues. It was also only Parra's 7th extra base hit against a lefty in his career. 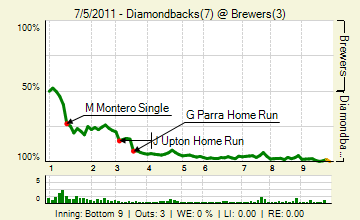 The top-rec'd comment (along with another of the top 3) was an Aaron Heilman joke, but Aaron was part of another win tonight, so I'll go positive and use this one from piratedan7:

makes me feel like we’re watching a teen horror flick while the tension builds….when will Zach or the DBacks pitching explode?

Erm... did I say positive? Nevermind.

So, pending the outcome of the Giants game, (San Diego 5, San Francisco 3 in the 7th, as of this writing) the Dbacks are a game and a half out of 1st place. We go for the series sweep tomorrow, Josh Collmenter matching up against Brewers ace Yovani Gallardo. Don't miss it. Or do. It's your choice. I won't twist your arm or anything. Or will I? Find out tomorrow...