Diamondbacks 8, Brewers 6: WTF. Meaning "We Take the Fourth", of course.

Share All sharing options for: Diamondbacks 8, Brewers 6: WTF. Meaning "We Take the Fourth", of course.

Stuff that happened today:
a) A pitcher hit a grand-slam, and his team still lost
b) Sean Burroughs got three hits
c) The Diamondbacks' starter only lasted four innings, and the team trailed by five, made two errors, ran into consecutive outs at third base...
d) ...but we won.

Really. No, really. Details after the jump.

A lot of people, myself included, have given Sean Burroughs a lot of crap for his performances this season. But credit where credit is due. He got three hits this afternoon, and helped key one of the most startling, unexpected comebacks of the year. In 2010, the Diamondbacks season officially died and went to join the choir invisible when Esmerling Vasquez walked off the Dodgers in Los Angeles, by balking home the winning run. And there seemed a very real chance we had seen the equivalent this afternoon, when Daniel Hudson gave up a grand-slam to the opposing pitcher. Not my idea of a happy fourth, shall we say.

In the past nine years of play, there had only been five grand-slams hit by pitchers, until Shaun Marcum took a hanging 0-2 slider from Hudson, and deposited it into the left-field bleachers. It seemed pretty questionable pitch selection, especially on that count, but give the Brewers' starter credit - he did a lot better job in terms of punishing a mistake than the Diamondbacks did. Hudson just didn't have his good stuff today, and Milwaukee lived up to their reputation as a good offensive ball-club, taking him for eight hits and a walk in the four innings. Hudson struck out three, but this was his worst start of 2011, and the first time he didn't record at least an out in the sixth.

That made the score 6-1 to the Brewers. They took the lead in the bottom of the third, courtesy of an error by Juan Miranda, who took a ground-ball and spiked the throw home to get the runner coming from third, causing it to skitter past Miguel Montero. That broke the scoreless tie, and Milwaukee had two on with no outs, but Hudson decided to resolve it himself, striking out the next hitter, then snaring a comebacker to start a double-play. While the D-backs tied it up on Montero's tenth long-ball of the year, the home side came right back with a solo shot of their own to regain the lead, then padded it on Marcum's slam.

It reduced our win percentage to just 6.5%. So, game over, right?

Not necessarily. Arizona did what they have been doing pretty much all season - staging a comeback and getting to the opposing starter the third time through the order. Wily Mo Pena immediately reduced the deficit: pinch-hitting for Hudson, he crushed the ball deep into the stands, making it 6-2. Then, in the sixth, it looked like a rally had been killed after the first two reached, as Montero hit into a double-play. However, an infield single by Burroughs and a line-drive off the bat of Juan Miranda each chipped away at the total, and a Drew RBI in the seventh brought Arizona to within one.

The bad old Diamondbacks were still lurking, and reared their ugly heads on the basepaths in the eighth. Montero singled and Burrough repeated it on a hit and run to left, but Miggy made a horrifically bad decision to try and reach third - he was barely round second when the outfielder was throwing - and was out by a mile. Miranda picked him up with his second double of the day, tying the game at six, but was thrown out at third trying to stretch it; replays showed it as too close to call. As Gerardo Parra then singled, speculation at the time was that it would have been very nice to have had those two runs.

However, it turned out we had simply put them on layaway. RBI singles from Chris Young and Montero in the top of the ninth, turned Miller Park into Miller Morgue, Arizona completing the comeback with their sixth and seventh unanswered runs. Much, much credit to the bullpen for sterling work after Hudson's premature departure. A total of five relievers scattered three hits and no walks over five frames of work. Particularly solid were Sam Demel, who retired the Brewers in order in the eighth, and David Hernandez who simply struck out the side in the bottom of the ninth, keeping Prince Fielder in the on-deck circle where he could do no harm [except to any passing vegan donuts].

The Diamondbacks' offense was on fire, pounding out a total seventeen hits. As well as Burroughs' trio, Montero got three, while Miranda added a walk to his two extra-base knocks, and Kelly Johnson also reached safely three times, getting his OBP up to the "semi-respectable" level of .294. Meanwhile, this is the first time a pitcher has hit a grand-slam and seen his team lose since July 1977. And now, the fangraph. Please remove all loose objects from clothing, and keep your arms inside the ride at all times... 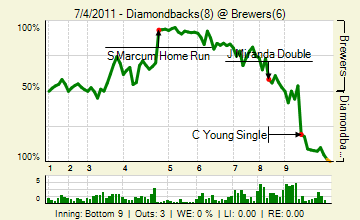 Comment of the thread? Well, the most rec'd ones were in the darkness of despair during the early innings, so are unrepresentative of the final result. So I'll go with shoewizard's late-inning summary.

The worst major leaguer is better at baseball than I'll ever be at anything I ever do in my life.

Back tomorrow, hopefully for more of the same. I'm off to stuff my face with hot-dogs, but there may be audio clippage from a, presumably, very happy D-backs locker-room later. Happy Fourth