With the Giants swept out of Cincinnati earlier today, all eyes were on the Diamondbacks, who looked to cut the Giants' NL West lead to two. Did Upton continue his nuclear-heat streak? Did anyone else in the offense step up to help? Would Saunders continue his own run of quality starts? All these questions and more in this Harry Potter-themed recap (it is his birthday, after all), after the jump.

After a single by Willie Bloomquist, I was all set to brag about how awesome he is ... until he was caught stealing. I recommend apparating next time, Willie B, I hear it's faster. Kelly Johnson's subsequent double was for naught, as he was left stranded on second after a grounder by Justin Upton and a swinging strike out from Miguel Montero.

So mark that as the first time this game that Arizona fans wished for a time turner.

Thankfully, the Dodgers feared top of the order was nothing but a weak threat, and the Diamondbacks got on with fulfilling Joe Saunders' pre-game prophecy of batting practice beginning in the top of the 2nd with Ryan Roberts and Gerardo Parra hitting back-to-back home runs. Fun fact: in 56.2 innings pitched prior to this game, Rubby de la Rosa had given up only four home runs. And while we're talking about home runs, Arizona leads the National League in them and are behind only the Red Sox, Yankees, and Rangers overall.

The game moved lazily along, with de la Rosa hitting pitch #79 after putting away the last batter in the 3rd. The Dodgers stretched out their half of the 3rd when a throw by Ryan Roberts went over the head of Xavier Nady at first, resulting in Aaron Miles being called safe instead of being the third out. Andre Ethier (yes, we know he went to ASU) hit a blooper to center field and we went from a 1-2-3 inning to an oh-please-no inning, but faster than you could say "Wingardium Leviosa", Kemp flied out to center and the Snakepit collectively breathed out a sigh of relief.

To what I assume to be the dismay of Dodger fans everywhere, de la Rosa went back out for the 4th and promptly walked Ryan Roberts after throwing the baseball within an inch of his head. Great control, that rookie has. Parra dropped the ball into shallow center and instead of the lead-off walk scoring, he got thrown out at second in a fielder's choice. Not to fear, though, as our good friend de la Rosa threw a pitch so wild to Collin Cowgill that by the time Dioner Navarro found it, Parra had advanced not to second base, but third.

Tell me. What would you do if you had one out, a runner on third, and the guy on deck was the pitcher? Would you throw to the guy at the plate, or would you use the open base and walk him? Because de la Rosa chose the latter, and Cowgill, on a 3-0 count, turned the fastball over the plate into a bloop single over a drawn-in infield and scored Parra. Mark Grace sums up the thoughts of everyone watching this game:

"No one has more respect for Don Mattingly than I, but that was not bright."

Unfortunately, Parra was the only run we got out of that inning.

Dioner Navarro decided that he, at least, was not going down without a fight, and blasted a solo home run off of Saunders in his next at-bat. And by blasted, I mean, he was lucky it hit the foul pole and therefore counted as a home run. But before the Dodgers could think too much about mounting a rally, Saunders got Jamey Carroll to ground out and Dee Gordon to pop-up for the end of the inning.

Onto the fifth, where KJ promptly lined the ball to center for a double. Justin Upton, after a 10 pitch at-bat, popped up, sending KJ to third. This time, the Dodgers thought they would play conservatively and walk Montero to face the less fearsome Nady. But you know what, Dodgers? You should never underestimate a Gryffindor's willingness to sacrifice himself for the greater good. And sacrifice himself Nady did, with a fly ball to right field, allowing KJ to score.

The game slowed down considerably then. Dodgers pitchers came and went like Defense Against the Dark Arts professors, and nothing much happened until the top of the 8th, when Parra came to the plate against Hong Chih-Kuo, and with Ryan Roberts waiting on first, hit it out of the park for his first career multi-home run game.

Saunders' second complete game bid in as many starts was crushed when he was pulled with two outs in the bottom of the 8th after giving up a single to Ethier. The Goblet of Fire selected Ryan Cook as his replacement; after he gave up a singles to Matt Kemp and Juan Rivera that scored Ethier, Diamondback fans everywhere started pinning their "Cook sucks" badges to their jerseys. David Hernandez was brought in to face Navarro, who struck out to end the inning.

Upton, after teasing us all day with near-hits, led off the 9th with a single to right. Bam, hitting streak extended to twelve. Montero worked the count during the next at bat and ultimately ground out to short, but not before a pick-off attempt went horribly wrong and Upton ended up on second. Unfortunately, Nady couldn't get him in for an insurance run, and the inning ended with Upton left on base.

All hopes for a 1-2-3 bottom of the 9th went out the window when Hernandez came out and walked Carroll before giving up a single to Dee Gordon. James Loney came out to hit for Mike MacDougal and flied out, advancing Carroll to third. That brought JJ Putz out from the bullpen to show the first years how it's done ... not counting Tony Gwynn Jr, of course, who singled to right. Parra was playing shallow but just barely missed it (someone has forgotten his summoning spells, Mr. Parra, so that'll be five point from Gryffindor), and Carroll took advantage and scored.

Fortunately, JJ was just kidding around, and the next two batters, Aaron Miles and Ethier, flied out. It wasn't quite the sweep we were hoping for this series, but hey, I told you guys we'd take it two games to one. You should all start listening to me. 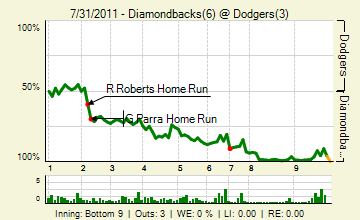 Comment of the night goes to Jim, with no explanation necessary.

The Diamondbacks head off to lovely San Francisco tomorrow to battle the Giants for first place in the NL West. Can they come out victorious? Tune in tomorrow to find out!