Share All sharing options for: Diamondbacks 6, Dodgers 4: In play, run(s)

Watching a game on one of the online apps is a very binary experience. Stuff happens, or it doesn't. There's not the same sense of uncertainty you get actually watching a game. Was that a ball or a strike? Is it a fair ball? Safe or out? Things simply pop up on your screen as undisputed facts, provoking immediate happiness or sadness. The only area of uncertainty is the titular line: In play, run(s). Whether a batter has a sacrifice fly or a grand-slam, they all get the same. But I can't say I've appreciated those three little words much more, than when they popped up on my screen during the top of the sixth inning.

Tthere is absolutely no reason to throw Either or Kemp anything that's anywhere near the strike zone. Ever.
-- Zavada's Moustache

In the first two games of this series in Los Angeles, Andre Ethier and Matt Kemp have combined to go 8-for-17 with a couple of homers and eight runs driven in. S'funny how what can seem so obvious to us, sitting on the sidelines, is apparently an arcane and inexplicable mystery to Arizona's pitching staff. Instead, our starting pitchers have served up so many meatballs to the pair, Kemp and Ethier must think they're in Ikea. Tonight's purveyor of delicacies, Micah Owings, seemed intent on combining with Josh Collmenter yesterday, with the aim of leaving me glad for the arrival of Jason Marquis.

Owings had a very easy first, retiring Los Angeles in order in only nine pitches. The second was a little stickier, as Matt "inevitable" Kemp singled and stole second, but Owings escaped that frame intact, leaving Dodgers on the corners. He couldn't escape the third, however, as a lead-off triple came across to score on another sacrifice fly. Worse was to follow as the despicable duo of Ethier and Kemp singled and homered respectively with two outs, and the Arizona advantage was mere dust in the wind. Another run crossed home for Los Angeles in the fourth, to make the score 4-1 for the home team.

Chad Billingsley certainly looked hittable early on. Two knocks in the first, two more and a walk in the second, but the Diamondbacks couldn't capitalize beyond that, the only hit in six attempts with runners in scoring position over the opening couple of frames, failing to score a run. Particularly galling was the bases-loaded no outs situation Arizona worked in the second, where all we managed was a Willie Bloomquist sacrifice fly, between an Owings K and a Kelly Johnson fly out. Still one run is better than none, and the Diamondbacks did have the lead. However, subsequent events would lead to ruing those wasted opportunities.

Unfortunately, Billingsley settled down, retiring 12 of the next 14 batters that he faced, from when we'd loaded the bags with no outs in the second, through the end of the fifth inning We did get a man into scoring position in the fourth, but Bloomquist could only ground out back to the mound. The sixth inning proved a return to earlier form. Chris Young singled and took second on the next pitch, followed by walks to Brandon Allen and Ryan Roberts, and for the second time in the game, Arizona had the bases loaded with nobody out. Could they take better advantage of the change this time round?

Well, Gerardo Parra immediately made sure they wouldn't do any worse, drawing a walk on a full count to move the tying run in to scoring position. Kirk Gibson then made the decision to replace Owings with Xavier Nady, who did better than many people probably expected, getting another run in with a sacrifice fly, and moving that all-important tying run up to third, still with only one out. The sane from Bloomquist, just liked he'd done in the second inning, would have tied the content, but it was not to be, as he took strike three. Kelly Johnson walked, re-loading the bases for Upton.

That was the end of Billingsley, and the Dodgers went to their bullpen, sending up Matt Guerrier for the sole purpose of facing J-Up. This was an ideal opportunity for our young star to do something productive with the aggression seen in the dugout late yesterday, by hammering one in to the gap, or better yet, into the bleachers. Or would he let his impetuosity get the better of him again, providing more fodder for the nattering nabobs of AZCentral? If the first swing suggested the latter, the title of the recap should have given you a clue to the outcome. A beautiful, bases-clearing double to right-center, and Arizona were back in front, 6-4.

On the other hand, this did mean it was over to the Diamondbacks bullpen, with a lead to protect for 12 outs. Ryan Cook, freshly off the bus from Reno to replace the ailing Alberto Castillo (elbow tendinitis, thank you for asking) was first up. He did get two outs, but a single and a walk led to his departure, in favor of UberLOOGY Joe Paterson, now restored to his position as our sole left-hander. He got pinch-hitter James Loney to ground out, and the Arizona Diamondbacks had steered themselves safely through the sixth-inning shoals. The seventh inning was similar. A lead-off single, a mid-inning change - this time, Bryan Shaw coming in - and no damage done.

The eighth saw Arizona waste some more chances, getting two men in scoring position with no outs, thanks to a pair of singles, followed by a wild pitch. But Kelly Johnson struck out and, after an intentional walk to J-Up [the Dodgers pitching staff having finally decided, albeit too late, to adopt the approach espoused by Zavada's Moustache], Miguel Montero hit into a double-play and the D-backs were unable to pad their lead. However, David Hernandez threw a 1-2-3 ninth to put Arizona on the brink.

After two easy fly-outs, closer J.J. Putz couldn't quite put away Tony Gwynn, Jr - though was not helped by at least one dubious call from Cowboy Joe West at home. An 11-pitch walk brought the tying run to the plate, with the ominous shapes of Ethier and Kemp lurking on-deck and in the hole. Fortunately, J.J. Putz decided to spare our lower colons further punishment, and another fly-ball ended the game, bringing Arizona back to three games behind San Francisco.

I think that's an outcome few would have expected when we went 4-1 down, but Justin Upton continues to prove his MVP credentials. He went 2-for-4 with a walk and three RBI, extending his hitting streak to 11 games. Over that time, he is a ridiculous .500, having gone 21-for-42, with 14 of those hits being for extra bases, including six home-runs, and 19 runs driven in. His OPS coming in was a decent .846, but it's now risen all the way to .933, in less than two weeks. If he keeps this up, Sprankton might run out of up-arrows during next week's Ups and Downs. 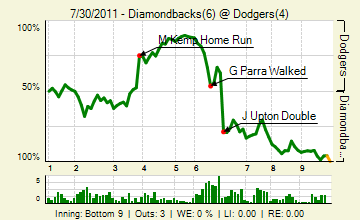 Only 521 comments in the thread, but it was a late game on a Saturday, and I'm sure everyone had better things to do. Except me... :-( Clefo snagged top spot on 78, with the laideez representing well, 'charmer, 'claws and 'starr12 all getting over 50 [comments in the girls' thread not included]. Also present: 4 Corners Fan, Jim McLennan, porty99, BulldogsNotZags, blank_38, sonic barracuda, rfffr, Sprankton, emilylovesthedbacks, njjohn, dbacksfann, Dallas D'Back Fan, MagicMike23, Backin'the'Backs, kishi, andrewryno, CaptainCanuck, Brian MacKinney, NASCARbernet, since_98, Burls, DeDxDbacKxJroK, The so-called Beautiful and TinySarabia.

But let's give the Comment of the Night to some praise aimed at another corner of the team, one not quite as lauded as Upton. Collin Cowgill broke his ohfer-his-career, getting his first hit to lead off the eighth. And this led to Rockstarr12:

I GOT A FEVER

And the only prescription is MORE COWGILL!

Let's do this again tomorrow: take the series and move to within two of San Fran. Who's with me?