For Josh Collmenter's first major league start back on May 14th, he was here in Los Angeles and held the Dodgers to two hits over six solid innings, a game which he and his team won by a score of 1-0. Fears that teams might adjust to his funky delivery have been allayed by his performances against the Brewers and Rockies, and he'd only allowed three runs (vs Colorado) in his last 21 innings of work. In fact, among rookies with at least 13 starts, he leads the league in ERA and opponents' average, on-base and slugging percentage.

So of course, on a night when the Giants were defeated by the Reds in extra innings and the Diamondbacks needed to win, all of those numbers took a nosedive. Collmenter only lasted three and two thirds innings and gave up five runs, all earned. Despite that, Arizona was still in the game until the 2010 bullpen made an appearance....

Ryan Roberts put Arizona on the scoreboard first with a two-out home run in the second inning, which, sadly, did not elicit another glove slam out of Dodgers starter Ted Lilly. Roberts had been 2-for-28 in his recent skid before his solo shot, and tonight he was 2-for-2 with a walk and two RBIs, hopefully a sign of more production to come. In the third inning, the Dodgers came out innocently enough with two one-out singles. However, one of those singles ricocheted off of Josh Collmenter's knee, and they were in front of Matt Kemp. And you know what Matt Kemp can do on the first pitch of an at-bat? Why, he can hit three-run home runs to center field and put the Dodgers up 3 to 1.

The Diamondbacks didn't go down easily. Justin Upton started off the 4th inning by hitting a slow grounder to the third base side of the pitchers mound. Lilly grabbed it, spun, and threw - rather, spiked - to the general vicinity of first base and the ball went into the stands to put Upton on second base. Chris Young's groundout moved Upton to third, and Xavier Nady singled down the left field line to bring in Upton and make it 3-2.

But the Dodgers got that run right back and more. Recent call-up Eugenio Velez led off their half of the 4th inning with a walk, with one out Collmenter hit Rafael Furcal('s jersey), and with two outs he hit Andre Ethier. Collmenter was clearly struggling with his control at this point, the blame for which I place squarely on the shoulders of NASCARbernet who had, the inning before this one, predicted Sean Burroughs would pinch hit for Collmenter. (He did, and he popped out meekly to shortstop.) Matt Kemp took that was his cue to go ahead and tack on two more RBIs to his night and drove a single into the gap. At that point, it was Diamondbacks 2, Matt Kemp 5, and that chased Josh Collmenter from the game.

Arizona still chipped back into the game and got help from Willie Bloomquist's home run off of Lilly in the 5th inning to cut the deficit from three to two. In the 6th inning, Chris Young led off with a walk, advanced to second on a wild pitch, and scored on a single by Ryan Roberts to make it a 5-4 game. After Henry Blanco ground out to move the runners to 2nd and 3rd with two outs, Gerardo Parra pinch hit for Zach Duke (who had pitched a clean 5th inning). With two strikes, Parra swung at a pitch that hit the dirt before it was gloved by Dioner Navarro. Except, home plate umpire Chad Fairchild didn't hear it hit the dirt, nor did he check the baseball for a dirt scuff, nor did he ask the other umpires for help. Nope, he just called Parra out on strikes, no questions asked, Diamondbacks rally over.

The Dodgers added onto their lead with a run off of Sam Demel in the 6th inning, who allowed three singles, one by Ethier that scored Jamey Carroll to make it 6-4. But again, in the next half inning, Justin Upton hit a solo home run to straightaway center field and put it back to a 1-run game.

But once again, the Dodgers fought back off of the Arizona bullpen, and this time put the Diamondbacks away for good. Demel went back out to start the 7th inning and, after a groundout, gave up a single to James Loney. Then Alberto Castillo came in and the wheels came off the wagon. After Dioner Navarro reached on a walk, Tony Gwynn Jr. hit a deep sacrifice fly to right field, which Upton completely whiffed on and it bounced over the wall for a ground rule double, scoring Loney. (After the inning, Justin knocked over a Gatorade tank and threw a garbage can upside down in frustration at his play.) Carroll hit a sacrifice fly that Upton did catch, though his throw home was wild and Navarro scored. Then Furcal doubled in Gwynn, and that 1-run deficit became greater again, this time to a 4-run deficit.

Castillo threw a scoreless 8th inning to give Arizona a brief glimmer of hope in the 9th. They made it interesting by getting to Javy Guerra and putting two runners on ahead of Justin Upton, but Upton popped out to first to end the game. 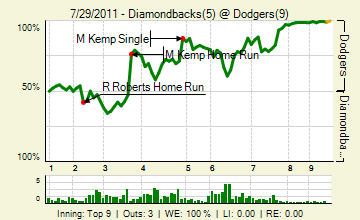 To be honest, the Dodgers outplayed the Diamondbacks all night, with more baserunners and seemingly better pitching, but it was a game that the 2011 Diamondbacks would normally have won. It was an early deficit that the offense kept closing off, but the pitching just couldn't keep it close enough. In the end, yes, the team didn't lose any ground against the Giants, but they also didn't gain any. At some point, they have to start shrinking that deficit.

Comment of the Day goes to hotclaws, who was not only truthful in her remarks but also tied in Ninja Turtles a few moments later. During an art history discussion, she said...

Tomorrow's game features Micah Owings taking on Chad Billingsly, though I honestly couldn't tell you what time it starts. The press packet still says it's a 7:10PM start, but I thought I saw earlier that it would be Kenny Albert and Mark Grace doing the game for FOX? Either way, tune in tomorrow for another must-win Diamondbacks game! And hopefully we'll see Collin Cowgill (0-for-11) get his first hit before passing Tim Olson (0-for-15) for zeros to start a career...