It really seemed like much of the game's "oomph" was stored within the eighth inning. If the game were SONAR, the little bits that ultimately decided the game -- like Chris Young's home run, for instance -- and the massive dot was the near-terribleness of the eighth. Regardless, I suppose that it's necessary to preface that part of the recap with the earlier happenings, lest you wish to get a half-baked summary of what happened. You can get that anywhere else on the internets, but NOT ON MY SNAKEPIT. You can hit the jump for the recap (I guess) or the Fangraph (sure), but most importantly, for some epic .gifness. You know you want to, so see you there.

The game started well enough, with singles from both Willie Bloomquist (take that, Jim) and Kelly Johnson getting things going early on against the Athletics' Josh Outman. With two on and one down after a Justin Upton strikeout (ah boo), Chris Young singled Willie B. home, giving the Diamondbacks a 1-0 lead. It was mostly CY just warming up, too, as he certainly led the charge tonight in Oakland. Arizona struck again in the third on a double from Young, giving the team a 2-0 edge. Chris felt that this 2-0 lead just wasn't enough for the now Putz-less bullpen, homering in the fifth to bring the lead up to a much more comfortable four. The fireworks ended there for both CY and the Diamondbacks (at least offensively), who moved into the eighth inning with a 4-0 lead still intact.

But wait, Wailord! You forgot about Joe Saunders, who started for the Diamondbacks! Aye, this is true, and usually I do this -- on non-recapping days, at least -- because the suckage is best gone ignored in my mind. But tonight, in Joe's return to the Oakland Coliseum, a place where he holds a 5-1 career record with a 2.45 ERA, the Colonel seemed pretty close to untouchable. Ok, so maybe that's a bit of an overstatement, as Oakland hitters managed a hit in seven of the eight innings Saunders pitched in, but he was still pretty darn good. Joe only struck out three in his seven innings of work, but he really didn't need to set the batters down at the plate; he induced a fair amount of groundballs, and when anyone would reach base, he was able to ensure they didn't advance. Hats off to you, Joe. He exited in favor of the TOTALLY AWESOME Yhency Brazoban in the eighth after surrendering a walk and single to lead it off. Oh, that brings me to the eighth inning.

I guess it's easier to look back at the inning with a smile because while it was hard to watch, we still came out on top (oops, spoiler alert). In just his second appearance with the big league club -- and, more importantly, his first in which a lead was to be protected in a tight spot -- Yhency pitched valiantly, throwing what can only be described as one of the greatest pitches in the history of the game. After stumbling on the mound, Brazoban feebly plopped the ball in front of him in an effort to make it appear to be a legitimate pitch. He probably failed on that front, as the balk was easily called, moving the runners to second and third. For the first time tonight, I was a bit uneasy. I mean, we were up 4-0, sure, but Yhency Brazoban was pitching with two men in scoring position, and Daron Sutton said we were "trying to get Heilman loose as quick as possible." My friends, this is never a situation you want yourself in. Scott Sizemore grounded out to short (a double play, maybe, had the balk not occurred), scoring the runner from third. After striking out Coco Crisp, another single from Hideki Matsui scored a second run, and a follow-up single from Chris Carter made things look even more dire. Luckily, my heart settled thereafter, as Brazoban got former Diamondback Conor Jackson to go down looking.

And that was basically that. David Hernandez performed admirably in J.J. Putz's absence, setting down the side 1-2-3 in the ninth to get his first save since The Easy Button's movement to the DL. It's good, too, because any sort of implosion from him would have made things a lot, lot worse in Dbackville. It's also worth mentioning that the Snakepit (that's us!) received an on-air shoutout from Sutton while he wished 'Pit-member snakecharmer a happy birthday. She's basically famous now that she's been on TV, so hopefully she's still down for writing here. Happy birthday, by the way, Jenny. 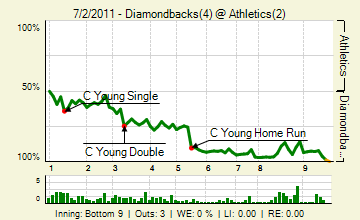 I'm going to forgo a Comment of the Night, simply because I need space to show you guys the aforementioned greatest pitch in baseball history. I present to you guys, your newest bullpen member... Yhency Brazoban:

Just as with every single recap I ever write, we go into the rubber match of the series tomorrow, and it'd be nice to not drop a series to the Athletics. It should end up being a pretty nice pitchers' duel, with Ian Kennedy and Gio Gonzalez doing battle in the Coliseum. It's even got a tolerable 1:05 PM start time, so there's really no excuse not to watch it. I was planning on going to sleep after writing this, but I fear dreaming of the above animation...