The Diamondbacks went back and forth with the Padres today, swapping strikeouts and leads until a 6th inning two-out rally secured it for San Diego. It was another frustrating game to watch for the offense as they failed to take advantage of pretty much any situation, going 0-5 with runners in scoring position with only six hits total in the game. Take Brandon Allen out of that equation and the D-backs would have been scoreless. Yuuucckk.

More details after the jump...

In a contest pitting two TOR pitchers in Mat Latos and Dan Hudson, hits and runs were expected to be at a premium. The first inning proved to be no exception as each pitcher motored through the side in order with a pair of strike outs. Latos has traditionally struggled in the early part of games this season though, and the D-backs kept that tradition alive compliments of a two-run homer by Brandon Allen in the second inning. For Allen, it was only his fourth hit in 25 at-bats this season, three of which went out of the park. I'm thinking he should quit taking advice from Henry Blanco and Wily Mo.

The Padres weren't amused, however, and answered with a home run of their own in the bottom of the inning off of the hands of Jesus Guzman. This quickly provoked the San Diego/MLB.TV announcers to totally lose their s**t and wonder how there could ever be two home runs in a game at PETCO. Kyle Blanks ended the inning by flying out, but not before nearly giving the commentators a heart attack by hitting the flyball near the warning track.

Fast forward to the sixth inning, still tied at 2-2, Arizona has the bases loaded via a single by Montero and walks to Upton and Young. Mat Latos was clearly fatigued and continued to miss the strike zone as he walked the third batter of the inning, Brandon Allen, plating the go-ahead run for the D-backs and leaving the bases loaded with only one out. It was Allen's third RBI of the game and Arizona's last as the Padres bullpen would get out of the jam.

Hudson followed up with two quick ground outs and appeared to be right on track. Then Jesus Guzman showed up again and spoiled the party, walking on four straight pitches to begin a Padres rally. An Orlando Hudson single, Kyle Blanks HBP, and a Luis Martinez single later and the D-backs found themselves trailing 4-3. That would eventually be the final tally for the game as both bullpens, despite Arizona's being a little shaky at times, put the game on lock down and wrapped things up. A tough way to finish the series...

The Fangraph isn't pretty with a fairly ugly spike going in the wrong direction at the end of the game. The D-backs only had five players post a positive WPA and only one player hit double digits. Not fun. 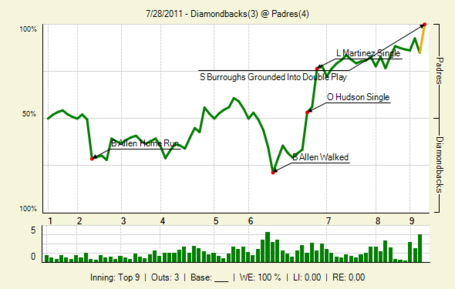 A healthy GDT for a weekday matinee as we hit 750+ comments among a team of 39 players. Here's the rundown:

The Diamondbacks now head to Los Angeles for another series against a subpar team. Again, NOW IS THE TIME TO STRIKE. If we want to win the division or the wildcard these are the series we'll need to manhandle. Josh Collmenter (6-5, 2.74 ERA) starts the series against Ted "LOL" Lilly (6-10, 5.08 ERA) tomorrow at 7:10 PM. Collmenter has a 1.29 ERA in his last three starts and has hit 7 innings in each of them. Ted Lilly, not so much... he's been roughed up recently and hasn't pitched 7 innings since May.