Share All sharing options for: 'Pit Your Wits: Week 17

Hola, todos! I don't have a ton of time to write an introduction out, so a lot of this is filler so it doesn't look weird underneath the sizable banner above. We have the results for each of the five questions last week, who did well (someone nailed all five, hurrah), who didn't, and how the leaderboard looks. One user's already out to a pretty commanding lead this early on, so read on and see where you stack up. That, and this week's contest. Oops, not enough filler. There, that should do. Almost.

So, there was a tiny bit of confusion last week, as I apparently thought that "lower than" and "less than or equal to" were opposites. Oops. A mysterious editor adjusted the post fairly quickly, so I went ahead with the guesses according to the edited post's legend. If people specifically referred in their post to which answer they wanted, I adjusted it accordingly. Anyway, if there's any sort of major issue, it can probably be resolved, but remember that this season's gonna be a lot more point-filled. Anyway, Justin Upton batted above .290 at .556 (he's a baller), Chris Young stole two more bases than Willie B's zero, Justin Upton out-homered Brandon Allen, David Hernandez didn't allow a run, and Dan Hudson out-hit Sean Burroughs. The "answer key" turned out to look something along the lines of ABBAA, and only one person hit all five; congrats to justin1985; he'll get the gold. Brian MacKinney, BulldogsNotZags, blank_38, and soco nabbed four points, earning them silvers; Finally, the following users got three correct, earning bronzes: emilylovesthedbacks, DeDxDbacKxJroK, Rockstarr12, BattleMoses, jaydubsped, since_98, Baja F1, jinnah, and eel. Go us: no one missed all five (though two correctly guessed just one)!

There was also the question of who started last Sunday, as PYW was posted before anyone really knew who would start for a fact. Micah Owings did, in fact, start that game, so the following users earn a bonus point: emilylovesthedbacks, soco, Dallas D'Back Fan, since_98, imstillhungry95, Torpedosneak, Rockkstarr12, Brian MacKinney, Swag11, eel, TylerO, jinnah, njjohn, and Baja F1. Woot. Here's what the updated leaderboard looks like. I decided to screenshot my Google Docs page from now on, as it saves me roughly 5-10 minutes of hating SBN's Editor. 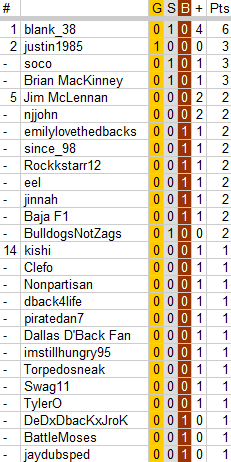 So, the floodgates have opened. It seems everyone's got their spot on the board, as we approach 30 active challengers. This is a good thing, though! blank_38 has a pretty sizable lead for just the second week, sitting pretty with twice second-place's score. I want some more differentiation in the scores, so I'll have another rec-based bonus-point contest. Again, if anyone has any ideas past what we've been cycling through, feel free to throw 'em out there and have the community use them in the near future. We'll move onwards to a caption contest, as I'm running a tad late on leaving for a vacation, so I don't have a whole ton of time to be creative. You guys can take care of the creativity part with your entries, I suppose. There was another awesome picture of Justin admiring a homer, but this seems to have more potential. 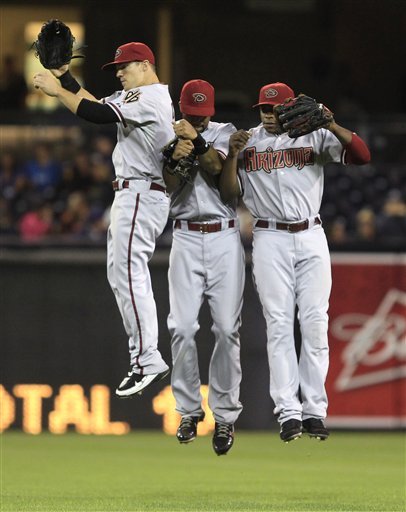 You'll earn one bonus point for every rec you get; also, let me please request that you guys keep your reccing hands at the ready. It's not as awesome when the leading one has two recs. :( Good luck! I'm off to Anaheim.