This match-up pitted two incredibly talented pitchers against each other, with Kennedy's 122 ERA+ matching up with Luebke's 135 figure, although Luebke had made 29 of his 34 appearances with the Padres this year out of relief.  Nonetheless, a 2.30 FIP and 2.83 xFIP show that Luebke is more than simply a creation of Petco Park, and he was one of the prizes of the Padres' farm system last off-season.  The early happenings went as expected, as the two pitchers traded zeroes for the first three innings, with both pitchers showing good control and each missing plenty of bats.

Arizona was the first to strike in the fourth inning, doing so in a grand fashion.  Justin Upton was headed to the plate against Luebke, but before he could get set in the batter's box - and while calling for time - Luebke fired ball one past a completely upright Upton.  Upton was clearly upset at the home plate umpire, but apparently felt it more appropriate to first vent at Luebke, launching his next pitch into one of the deepest parts of the ballpark for a straight center-field bomb.  He trotted around the bases, speaking to himself of fudge and other such delicious and family-friendly treats.  Perhaps the most hilarious moment of it was in the dugout afterwards, when Gibby and Alan Trammell shared a hearty laugh at Upton's hulking out at Luebke.

Meanwhile, Kennedy was cruising, racking up six strikeouts through the first four innings, but ran into some trouble in the fifth.  He struck out two of the first batters he faced that inning (walking the other), but Luebke came to the plate and notched an infield hit as Willie Bloomquist tried to backhand toss to second base instead of throwing over to first and getting the pitcher.  The toss was off the mark and drove Kelly off the bag, so everyone was safe.  Against the next hitter, Will Venable, Kennedy had some issues finding his arm slot.  He wound up leaving one up at the letters and just slightly on the inner half of the plate, which Venable promptly crushed off the right-field wall (home run distance in any other park) for a two-run triple, putting the Padres ahead.

Unfortunately for Luebke and the Padres, though, that Upton guy had a plate appearance in the following half-inning.  After getting ahead of Upton with a pair of quick strikes, Luebke served up another fat one on a 1-2 count, which Upton promptly hit about 450 feet.  I'm not talking about horizontal distance here, folks, I mean about 450 feet high as it sailed into the top floor of seats of that strange brick "steel mining" construct in left field.  If you missed it and haven't gone back to see the replay, go ahead now.  It's okay, I'll wait...

... Aaaand, we're back.  The unfortunate part of the homer (not a phrase you hear very often) was that Bloomquist was picked off and caught stealing earlier in the inning in another instance of Bloomquist's increasing baserunning failures.  Fun fact: Bloomquist is now 10-for-17 in stolen base attempts.  He was 7-for-8 in April, back when he was in the midst of his long-forgotten impressive start.  That's right, not only is our leadoff man almost solely reliant on his .315 BABIP to reach base, but he's three for his last nine in steal attempts.  Yikes.

Luebke went back out for the seventh inning, but things fell apart for the young lefty.  Miguel Montero drew a walk to start the inning, which brought Xavier Nady to the plate.  Nady crushed one deep to right field, right next to that aggravating short porch area, where a fan may or may not have interfered with the ball and diverted it over the rail.  For the life of me, I don't know whether or not it would have gone over anyways, but it wasn't reviewed (#HumanElement!) and the end result was a home run for Nady, putting Arizona ahead by two.  Cody Ransom followed with a hit, and Luebke's night was over after six-plus innings.

The inning wasn't over, though, as Luke Gregerson came in to try to stop the bleeding with nobody out.  Collin Cowgill hit a fielder's choice to shortstop Jason Bartlett, but Bartlett tried to get the lead runner Ransom at third, but everybody wound up safe.  Cowgill subsequently stole second base, although Gregerson calmly pronounced "meh" to the two runners in scoring position and struck out the two hitters he faced, Sean Burroughs - pinch-hitting for Kennedy - and Willie Bloomquist, on a barrage of sliders.  With lefty Kelly Johnson headed to the plate, Bud Black brought in the lefty (genius!), which proved to be... well, actually pretty genius, as Josh Spence struck out KJ, averting any additional damage without even a ball in play.

With that, Kennedy's night was over with an impressive line of six innings, four hits, two runs, nine strikeouts, and one walk.  The D-backs turned to Bryan Shaw, who was doing awesomely in the seventh inning until I screwed it up.  9:12 p.m., Dan Strittmatter: "Bryan Shaw is pretty good."  9:12:02 p.m., Bryan Shaw: "I hang breaking balls for fun!"  9:12:03 p.m., Luis Martinez: "I loves hanging breaking balls, I hit them for home runs!!"  4-3 game.  I am The Worst.  Shaw got out of the inning with the lead intact, but that doesn't make me less The Worst.

Chad Qualls and David Hernandez matched each other with scoreless innings in the eighth to keep the score locked at 4-3, and Padres relief ace Mike Adams subsequently locked down the D-backs bats in the top of the ninth.  This brought out J.J. Putz for his first save attempt since coming back from the Disabled List, and Putz looked plenty sharp, blowing his heavy fastball by hitters in the 92-94 range.  Putz registered two strikeouts and received the benefit of a bad call at second base on a stolen base attempt by Orlando Hudson on the last play of the game, a should-not-have-been strike-him-out, throw-him-out double-play to seal the victory. 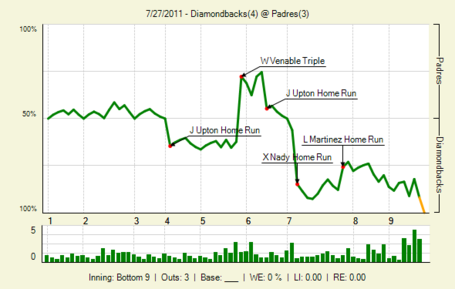 Tomorrow's match-up is Dan Hudson vs. Mat Latos - definitely one I'll be watching.  'Skins got very.... passionate about his disdain for one Sean Burroughs tonight, with good reason.  Here's the corresponding CotD, detailing his frustrations for the team's poor showing at the tail end of the seventh inning:

Sean Burroughs, Willie Bloomquist, and KJ: You’re all on my shit list.

And since the other two aren’t TOTALLY worthless, I’m blaming it ALL on YOU, Burroughs.