Baseball can be a strange, strange, strange game some days.  Most games seem the same, most outcomes fall within an acceptable range.  It's part of the reason why it's a game the lends itself so well to statistics; its outcomes neatly fall within the acceptable ranges, and things rarely stray out of it.  It's not like handegg, where some new gadget play might be written up that no one has ever seen before.  Music City Miracle, anyone?  It's not like football, where the great players show creativity with the ball and service, and can create goals out of nothing.  91' against Algeria?  122' against Brazil?

Baseball is safe.  Most of the time.

The Diamondbacks started the game knowing that at worst they'd hold their ground in the division race with the Giants.  San Francisco lost 7-2 just as the game in San Diego got under way, so a win would put the Diamondbacks only 3 games.  Obviously, if you read the title of this recap, you know the Diamondbacks did just that.  It's how they did it that was so weird.

Let's start with Joe Saunders.  What got into him?  It was almost his 3rd career complete game shutout, and he was marvelous throughout.  He went the distance, allowing only run, 6 hits, 1 walk, while striking out 4.  He only needed 3 or less pitches for 24 batters faced.  Part of this might be the awfulness/lack of patience by the Padres batters, but it doesn't matter because the result still is the same.  Saunders was lights out in a game that had the feeling before hand of a traditional Diamondbacks disappointment.

Dustin Moseley was good for San Diego, but just not as good as Saunders.  He ended up going 7 innings on 7 hits, 4 earned runs, 2 walks and 5 strikeouts.  He was a victim of some good baseball by the Diamondbacks, and also a little bit of bad luck from his own defense.  He also apparently dislocated his shoulder while getting a hit in the bottom of the third, but luckily wasn't seriously injured and was able to stay in the game.

Instead of going inning by inning or any boring nonsense like that, I'll try to just go run by run, because each one had a different flavor to it.  The first two runs the Diamondbacks came in the third.  Willie "Singles" Bloomquist led things off with, you guessed it, a single.  He was brought in with a Kelly Johnson triple, who then was brought in with a Justin Upton sacrifice fly.

Then in the top of the 6th, Justin Upton felt the need to continue his Cheat-Mode performance of the past week or so by launching an absolute laser to the deepest part of PetCo Park's centerfield.  It must not have gone much higher than 30 feet, but it was far enough to get out.  Sometimes you hit it into Friday's, and sometimes you hovercraft it out.  This is Upton's world, and we're just living in it.

The scoring wasn't done for the 6th, however.  Chris Young had a great at bat where he battled for 8 pitches before taking a walk.  He then promptly tried to steal second, and was seemingly successful.  Jason Bartlett's tag didn't land, but he feigned like the ball went to centerfield.  Young looked to centerfield as well, having over slid second base and was only able to just barely make it back to the bag before Bartlett's tag arrived.  It would have been brutal if Young had been tagged out on that kind of trick play.  After this things got a little weird.

Ryan Roberts didn't have a great day at the plate.  He was 0/4 with a strikeout, and just really didn't seem to be in the right groove.  And really, he didn't have anything to do with this next run except being present.  He popped up to Orlando Hudson for the second out.  The only problem is that Hudson thought the inning was over, and he tossed the ball to the ballgirl, who promptly tossed it out of play.  This resulted in both Young and Montero (who had been intentionally walked to bring up Roberts for an attempted double play) to be awarded 2 bases, which meant that Young scored.  My head hurts just thinking about it.

So 5-0 and we're cruising along.  Here it is the 7th inning, and the Diamondbacks were in a taco-giving mood.  Willie "Singles" Bloomquist doubled with two outs, and he was brought in easily by a Kelly Johnson double.  6-0, get your free tacos tomorrow (at a participating Taco Bell only, between 4-6pm, with the purchase of a large drink).

Fast forward to the bottom of the 9th and Joe Saunders is still on the hill.  He went into the inning with only 90 pitches, and it's the Padres, so why not?  He got the first batter to ground out.  He got the second batter to fly out to right.  I remarked to my wife, "this is like the Joe Saunders version of a perfect game."  And then the next batter launches a home run to centerfield on the very first pitch he sees. 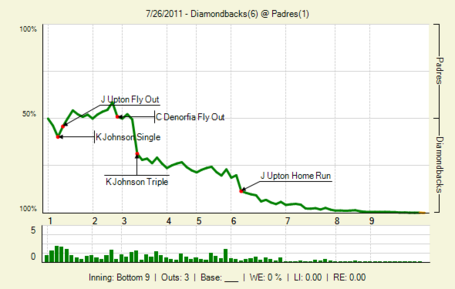 Quite a lively game day thread(s).  There were 200 comments before even first pitch, though the vast majority had nothing to do with baseball whatsoever.  I don't think Jim would have disapproved if I had deleted significant parts of the GDT.  Anyways, over 2 threads we generated almost 2000 comments.  snakecharmer took the lead with a whopping 206, and joining her in the Century Club were DbacksSkins, imstillhungry95, jinnah, BulldogsNotZags, Clefo, and I.  We were all joined by: ZonaBacks10, dbacksfann, The so-called Beautiful, NASCARbernet, kishi, asteroid, Rockkstarr12, since_98, piratedan7, Dallas D'back Fan, Gibbysdad, blue bulldog, dbacks25, Dan "Singles" Strittmatter, 4 Corners Fan, mrssoco, Wimb, Brian MacKinney, hotclaws, blank_38, porty99, TinySarabia, rfffr, txzona, Jdub220, emilylovesthedbacks, CaptainCanuck, longshorts, 7Insomniac, Muu, Husk, Azreous, Backin'the'Backs, Jim McClennan, Torpedosneak, oldspartan, SongBird, and shoewizard.

The Comment of the Day goes to asteroid, in reference to 4 Corners Fan buying mini bundt cakes:

I can't resist a good pundt.

Anyways, tomorrow we face off against the Padres again with Ian Kennedy squaring off against Cory Luebke.  Hopefully we win, the Phillies win, and the Pirates win tonight and tomorrow.  First pitch for us is at 7:05pm again, so be here or by definition be somewhere else.