It's not every day that you get to thoroughly demolish your opponent in this game, especially when you get to ration it out over the entire game. When it's against a division rival -- let alone one that sits just a handful of games below you in the standings -- it's all the sweeter. Today, however, was one of those days. It was our first win with a margin of victory greater than eight since May 30th against the Marlins, but I'd have to say this one was a little bit better. Josh Collmenter was just fine (though I'm still waiting for the other shoe to drop... sometime), but the true highlight of the night was the offense. It's nice to be able to say that, too: Willie Bloomquist, Gerardo Parra, Justin Upton, Miguel Montero, and Collmenter all had multi-hit games, while Upton and Montero combined for eleven RBIs. That's a lot of italics for an introduction, guys. There's even a bold. Hit the jump (pretend a Rockies pitcher threw it, it'll be easier) for the deets. Yes, deets.

The 1-2-3 first from Collmenter was most certainly not representative of how the offenses of the night - only Colorado's. The Diamondbacks wasted absolutely no time getting their bats warm on Saturday night: Bloomquist singles, Parra walked, Upton doubled, Chris Young singled, Montero doubled, and Ryan Roberts walked before the first out was recorded. Our two most recent call-ups in Brandon Allen and Cody Ransom recorded two quick outs, bringing Collmenter to the plate. He singled home a run, the first RBI of his career, bringing the final tally for the first inning to five, more runs than Josh has received in any of his starts from the offense. Willie B struck out to end the first, but we batted around. Woot. It was pretty awesome to see the offense firing on all cylinders so early on, and while the Rockies are my least-hated division rival (that's the most I can say without being banished to the dungeon), gaining ground on the third-place team and keeping up with San Francisco was pretty great as well. Oh, wait, there's more to the game than the first? Fine, fine...

Troy Tulowitzki homered for Colorado to lead off the second, and past Ty Wiggington's two-run single in the fourth, Collmenter baffled the Rockies lineup, allowing just two hits past the fourth. He pitched into the seventh, finishing with a line of 7 IP, 6 H, 3 ER, 4K and no walks. That's a WHIP of 0.93, folks. Collmenter continues to impress, holding a 2.74 ERA under his belt for his rookie campaign, and it's hard to argue against with his continued presence in the rotation with numbers (and games) like these. I don't know what it is, whether it's the arm angle, his stuff, or the fieriness bestowed upon him from the Mustachioed One: whatever it is, it's winning us games. I've heard whispers of a Rookie of the Year run, too, but I can't help but feel those may be a bit questionable with the competition. Hopefully, I'll look back on this in a few months and be like "LOL WAILORD OF THE PAST YOU DON'T EVEN KNOW BRO YOU DON'T EVEN KNOW" as headlines of Collmenter's RotY fill the front page... but I digress.

Anywho, the offense really didn't let up. Miggy added two on a blast to right in the second, while Hammel finally left the game in the sixth after he loaded the bases. Eric Stults wasn't much better, immediately walking Montero to bring the score to 8-3 Arizona. Enter the seventh: Allen and Ransom led off the inning with two outs (le sigh), but pinch-hitting Xavier Nady drilled a ground-pool double (to quote Schulte) to right, Bloomquist was intentionally walked, and Parra was hit by a pitch to load 'em up for The Lazy One. Justin Upton absolutely demolished the first pitch he saw, depositing it into the second deck, I believe. It was estimated at 436 feet (thanks, @dbacks), and it certainly looked it. The score was put to 12-3 at that point, and Arizona decided to finally set the Rockies down peacefully. Cody Ransom was 0-5 in his debut, by the way, so there's the token bit of negativity for the recap. Now, back to the happiness/FanGraph. 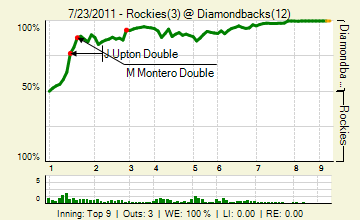 So much goodness all around tonight. When your worst player only brought your odds of winning down by less than three percent throughout the entire game, it's a game to go to sleep happy about. The GDT was pretty barren (maybe you were all at the park? According to NASCAR, Chase hit 35,000+ tonight, which would make it the fourth-highest attended game of the season), as we hit just 455 comments at time of writing. Only two of us hit higher than the low-thirties, with 'charmer taking the gold at 78 and NASCAR taking silver with 62.

Comment of the Night goes to Dallas D'Back Fan, with a comment that requires no context outside of the game:

MLBtv for a season: $99Dr. Pepper: $1.59Watching your team destroy a division rival in the first inning: PRICELESS

Yeah, I'd have to agree with that. I don't know what the odds are of us collecting another 14 hits tomorrow are, but hopefully pretty high. Micah Owings gets the spot start, going up against Ubaldo Jimenez in the rubber match. Just glancing at the stats, Micah's 3-0 with a 2.76 this season while Ubaldo sits at 6-8 with a 4.00. The research goes no further, my friends. See you tomorrow.