Remember last week when Ian Kennedy pitched a good game against the Dodgers for his 10th win and then Daniel Hudson followed it up with a complete game for his 10th win? Ah, those were the good old days. Kennedy had another career night last night for his 11th win, would Hudson match that tonight?

Unfortunately not. Despite having a 3-0 lead at one point, Daniel Hudson struggled all night long, the defense played poorly behind him, and he couldn't quite hold on. The Diamondbacks dropped the first game of this series to the Colorado Rockies but remain four behind the San Francisco Giants.

Looking at this matchup, you could say this was a game the Diamondbacks felt good about. Aaron Cook, who came off of the disabled list in June, hadn't yet won this season and Daniel Hudson hadn't lost since mid-May. But Hudson struggled from the beginning of this one. He allowed two baserunners, was aided by a fantastic snow-cone catch by Chris Young, and needed 31 pitches to get through the first inning. He was frustrated with himself and in the dugout at various points tonight you could see him shaking his head.

Arizona took the lead in the 2nd inning. Miguel Montero led off with a single and just as Mark Grace was waxing poetic about the virtues of the hit-and-run, Geoff Blum hits a no-doubt home run to right field. Later in the inning, Hudson failed to successfully sacrifice Gerardo Parra, so when Willie Bloomquist tripled to the gap, Hudson had to huff and puff to score from first base. Heck, he slowed down so much at the end that he almost looked like he was limping, and he might have been out had the throw been accurate. Nonetheless, he made it home and gave the Diamondbacks a 3-0 lead.

The Rockies started their comeback in the next inning. Pitcher Aaron Cook led off the inning with a bloop single that fell between Brandon Allen, Justin Upton and Kelly Johnson (who was pulled the next inning for precautionary reasons and left calf soreness). Dexter Fowler then singled to right and Mark Ellis singled to center, and the bases were loaded with no outs for Todd Helton. Helton hit a sacrifice fly to Parra that ended up being a 7-5 double play as Parra threw to third and got Fowler out. Things were looking up, but Troy Tulowitzki (2-for-33 against Arizona this season coming into tonight) doubled down the left field line and scored Ellis to make it a 3-2 game. They tied it 3-all in the 4th inning when Ty Wiggington doubled to lead off the inning and scored on a two-out single by Aaron Cook.

A Montero triple (the 4th of his career) and a single by Parra gave Arizona back the lead 4 to 3 in the 6th inning. With two runners on and one out, Hudson failed to get the sacrifice bunt and instead grounded into a double play to end the inning and losing a good chance to add on.

Colorado got the lead right back in the 7th inning. Hudson once again loaded the bases with nobody out, this time courtesy of a double by Fowler and by hitting Ellis and Helton. Geoff Blum could only get one out on Tulowitzki's groundout, and Fowler came in to tie the game 4-4, and Hudson was done. In 6 1/3 innings, Hudson threw 102 pitches, allowed 10 hits, 1 walk, and got 7 strikeouts. He had 1-2-3 innings in the 2nd and 5th but had at least two baserunners in the other innings. (Interestingly, when he allowed three baserunners and a run in the 4th inning, it only took him 10 pitches.) After Hudson left the game, Joe Paterson gave up a sacrifice fly to Seth Smith and Mark Ellis scored to put the Rockies ahead 5-4.

It only got worse, Arizona's bullpen not even able to hold down a one-run deficit. With two outs in the 8th inning, Eric Young Jr. (called up earlier in the day when Carlos Gonzalez was put on the DL) walked on a checked swing that could've been called a swing. Instead, Fowler then tripled to score Young, and Ellis singled to score Fowler (all runs off of Sam Demel). Ryan Cook came in in the 9th inning in a much lower leverage situation than his first game, got his first out of Tulowitzki to lower his ERA from infinity to 81.00, but walked Smith who came around to score on a groundout by Ryan Spillborghs to give the Rockies an 8-4 lead. Ryan Cook's ERA is now 36.00, which is still better than ∞.

The bottom-to-top of the order didn't do much against Rafael Betancourt (who took 30 seconds between each pitch). Parra walked to lead off the 9th, but Sean Burroughs and Ryan Roberts both struck out and Bloomquist grounded out in a quiet 9th inning. 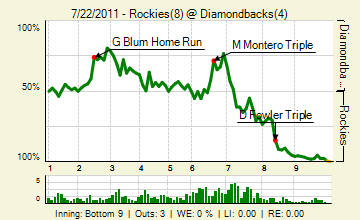 You know it's not a good night for pitchers when your highest winning-percentage pitcher, who only got one out, has a WPA of under 1. If you're wondering when we get J.J. Putz back, I imagine it might be San Diego - he pitched a scoreless inning with the Reno Aces against the Sacramento Rivercats, allowing one hit and two strikeouts. (Despite that, the Aces lost 4-1 according to my aunt.) He will get another chance tomorrow to see how he does after back-to-back outings.

He may have been only third place in total comments, but he was the funniest again tonight. Clefo busted out the lyrics (on cue, even) for this gem:

The Diamondbacks dropping Game One of the series with our #2 starter was made more depressing when the Giants lost to the Brewers. So "At least the Giants lost" remains our mantra, but at some point the team has to start moving up instead of staying put. They are .500 since the All-Star break and can't expect the Giants to falter on their own. Good things happen to those who show up - show up, Arizona!