Arizona, where were you?  Were you in the pool?  Were you out with friends, or working on projects, or watching a movie?  Were you reading a book?  Were you running errands, or were you at work?

It was a game that lulled you with subtlety, accentuated with the occasional action.  Was it a pitchers duel, or was it two teams trying to escape for different reasons?  The Brewers had to get out of town and head up north to San Francisco, and the Diamondbacks were just hoping to even the series.  Not what you want at home, in a divisional race.

The game zoomed by the first 3 1/2 frames in only 50 minutes.  Each side got a hit in the first, but the two pitchers settled down and starting putting down their opposition with little effort.  Ian Kennedy looked good overall, only allowing 1 hit through the first 4 innings.  Zach Greinke matched him, unfortunately, and struck out Diamondbacks and induced groundouts at will.

Things finally broke open in the bottom of the 4th when Justin Upton hit a solo bomb that very nearly went to Utah, where it was promptly given a Book of Mormon, Jello cookbook, and a smile.  Upton, for his part, stayed on the diamond and just ran the bases for his run, which is good because I don't believe the umpires would have looked to kindly if he had left the building before crossing home plate.  Miguel Montero was up two batters later, and he thought the whole running the bases thing looked like so much fun that he'd give it a go.  He deposited a ball into the left field bleachers (at a .007% annual interest rate) and just like the Diamondbacks were up 2-0.

Greinke seemed particularly vulnerable in the 4th, as Kelly Johnson and Geoff Blum both had long fly outs that seemed almost destined to go out.  He locked it down after that, finishing with a 7 inning performance with only 2 runs earned on 5 hits, 7 strikeouts, and no walks.  If he doesn't make two mistakes, two tiny mistakes that probably missed by an inch, he's probably driving away from this game with a win and a date with a local beauty queen.

Kennedy wasn't to be outdone by some Brewer, so check out this line: 7 innings on 4 hits, 5 strikeouts, and 2 walks.  He was only in trouble once, and it came right after finally getting a lead.  In the top of the 5th the Brewers eeked out 2 singles and a walk with 2 outs to be the screws on our Ginger Bread Man.  Kennedy wasn't having any of that weak stuff, though, and looked Nyjer Morgan in the eyes, asked him if he had ever heard a yak in a bear trap, and got the hapless Milwaukee center fielder to fly out to moderately deep center.  Disaster avoided.

The drama wasn't over for the night, unfortunately.  Kennedy finished his go of things in a fairly peaceful manner, but Bryan Shaw was not so lucky in the 8th.  He came in full of hopes and dreams, and left broken more than an unemployed college educated 20 year old with a suitcase full of extracurriculars but no real job experience.  He gave up a lead-off single to Corey Hart, and then slipped a little funny business up on Nyjer Morgan, who was attempting to bunt.  Montero, from his view behind the plate, was convinced that Morgan's bat had touched the ball and it was an inadvertent bunt, but the umps ruled against our All-Star catcher.  Faster than you can say some clever phrase there were two on with no outs, and Ryan Braun was up.

Shaw wasn't ready to leave, however, and he got Braun to ground into a double play.  Joe Paterson was called in to take on the World's Fattest Vegetarian, Prince Fielder, and he struck out Fielder in 3 straight breaking balls.  Let's put it this way, Fielder was posterized.  Fielder just looked silly up there today, swinging away at every breaking ball like it would give him a deep fried Twinkie.

Even with the minimal Brewers offense up to this point, the bottom of the 8th, it never really felt like the Diamondbacks had this one in the bag.  Maybe it was the overuse of the bullpen the past couple days, but I really felt Milwaukee was going to figure out a way back.  The Diamondbacks had other plans.  Gerardo Parra led things off in the 8th with a single.  He stole second on a Ryan Robert strikeout.  Kelly Johnson was up next, and there couldn't have been anyone feeling good about it.  Why, you ask?  Well, even if you didn't, here's something ponder: the previous 3 at-bats for Johnson had all been fly outs to left.  He just kept getting close, but had nothing to show for it.  This time, though, he launched a ball into the left field bleachers, and the Diamondbacks had some insurance runs.

David Hernandez was brought into the finish the game, causing poor Dan to likely go into some kind of anger-induced coma.  He was good, though, getting both Rickie Weeks and Jonathan Lucroy to strikeout around a single and a groundout to end the game.  With San Francisco being idle (and apparently having nothing better to do than troll the 'Pit), the Diamondbacks picked up a half game on the deficit. 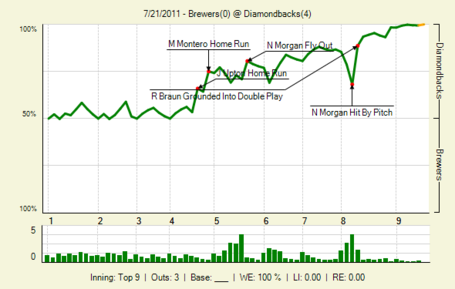 Rather pitiful effort in the GDT, even from those participating.  We were lulled to trance by the performances of Kennedy and Greinke, I guess.  Didn't even break 500 comments, and I was the only one to be in the Century Club.  I was joined by: kishi, Clefo, Jim McClennan, hotclaws, Rockkstarr12, snakecharmer, xmet, asteroid, jinnah, 4 Corners Fan, JoeCB1991, txzona, porty99, NASCARbernet, DiamondbacksWIn, YoungCardsFanatic.

We were also joined by BulldogzNotZags, but for some reason I didn't include him because I'm a horrible person.  So, sorry, fellow Women's Soccer lover.


I DO IT FOR DREWWWWWWWWWEVERYTHING I DOOOOOO

Founder of the 'Foundation for the Advancement of Clefoing' a 501C3 "I'm like if it fits in the oven, play ball." - soco Promised Colin Cowgill fifteen sandwiches on 7/6/2011

So the Diamondbacks limp away from the series with a split, somehow.  After the Enright start, I really wasn't optimistic.  Tomorrow we welcome the Rockies to town, and by welcome I mean we find their tour bus and take it for a joy ride and take a poop in the bathroom (oh the horror!).  Anyways, the game starts at 6:40pm, so hopefully we'll have a little better presence at both the ballpark and here in the GDT.