Joe Saunders has been excellent as of late, and Chris Narveson has been less than impressive in the month of July. And with the Giants having lost 1-0 to the Dodgers earlier today, it was time to make a move and get one back.

Sadly, Stephen Drew's fractured ankle in the 4th inning really makes the end result seem less important than the loss of a key member of their team. Nonetheless, this was a game the Diamondbacks should have won. Follow the jump to see how the action played out.

Early on, the night may have seemed to have a whispered rememberance of last night's outing. Joe Saunders managed to sit down his first two batters, but Ryan Braun took a 2-2 fastball and dropped it several rows into the left-center bleachers to give the Brewers a 1-0 lead.

The Diamondbacks didn't offer much inspiration, though. We saw Justin Upton get picked off first to end the bottom of the first, and then some errors- both fielding and mental- in the top of the second. But Saunders kept his cool and kept the Brewers from adding to their lead in the second. He started doing a pretty nice impression of a ground ball pitcher- in the third and fourth inning, he had four ground outs, one fly out, and one K swinging.

The Diamondbacks offense wasn't doing much early on, stranding a runner in the second, but the bottom of the fourth started off with a double from Stephen Drew. Upton grounded out, but Chris Young hit a high fly ball to left field, and that was where the game took an unfortunate turn. The ball fall fair, and Stephen Drew rounded third to come home. Ryan Braun threw the ball in, and the throw was relayed to get Drew out at the plate. Even worse, though, as Drew slid, he injured his leg and was obviously in pain. It's painful to watch that replay. They took him off the field, and the reports say that he has a fracture right ankle. He is probably going to have surgery, so he may not be back this season.

The dangers of the fourth inning weren't over, though, and the DBacks weren't the only victims. With CY at second, Ryan Roberts flew out to center, but Carlos Gomez, the Brewers center fielder, landed badly. Reports on him say he has a broken left clavicle. Ouch.

After that, the DBacks offense seemed to shut down for a bit- as was mentioned in the GDT, their heads didn't seem to be in the game. They went down 1-2-3 for the next three innings. Meanwhile, while Saunders kept it close, he finally ran into more trouble in the seventh inning. A two-out single and a walk gave the Brewers a runner in scoring position, and a single from Jonathan Lucroy stretched their lead to 2-0. It looked like they might add on in the eighth, when the umpire called a Ryan Braun home run, but the subsequent review called it a foul ball, (save the human element!) and Bryan Shaw held the Brewers scoreless.

Chris Narveson was supereffective against the Diamondbacks offense tonight, so none of us were too unhappy to see him pulled at the start of the eighth. Though we were likely a bit confused, since he was only at 87 pitches. Francisco Rodriguez came in from the bullpen, having been acquired by Milwaukee from the Mets. For once, we managed to do some damage. Kelly Johnson started the inning with a single and then stole second. Geoff Blum drew a two-out walk, and then Willie Bloomquist came up and hit a bases clearing double, tying up the game at 2-2. A 1-2-3 inning from Hernandez took us to the bottom of the ninth, and we were all queued up for a walkoff.

But it wouldn't happen in the ninth inning. We were poised for it, set up by a Justin Upton ground rule double, followed by a wild pitch to take third with no outs. But the Brewers brought in five infielders and Takashi Saito worked out of it - he got ground balls from Chris Young and Ryan Roberts, and then, after intentionally walking Kelly Johnson, a fly out from Sean Burroughs ended the inning.

Free baseball, right? The tenth inning means we got to see Ryan Cook, the newest member of our bullpen, and his major league career did not start auspiciously. Faster than Yhency Brazoban could say "I could have done that," Cook gave up a single, a wild pitch, a walk, and a balk to give the Brewers runners at second and third with no outs. Singles by Nyjer Morgan and Ryan "I really hate that guy" Braun brought in two runs, and Cook's debut appearance with the Diamondbacks was over. Alberto Castillo came in and got a double play. McGehee struck out to end the inning, but the damage was done.

Montero worked a leadoff walk in the bottom of the 10th but Parra grounded into a double and Willie Bloomquist, the hero just moments earlier, struck out to end the game. 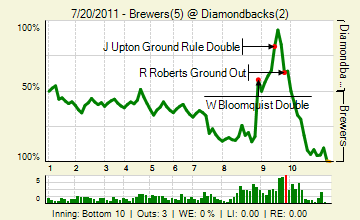 No need to have a Comment of the Day tonight. We're all wishing Stephen Drew best wishes over his recovery, and we'll see you next season.