It's safe to say many were looking forward to the return of fan-favorite and Twitter-friendly Diamondback Barry Enright tonight as he took the mound for the first time since May the Fourth. But our joy soon turned to nervousness as Enright gave up five runs in the first inning. Arizona has previously overcome large deficits against the Milwaukee Brewers, but 'twas not to be tonight. If you really want the grizzly details of how nearly everything went wrong with the Diamondbacks pitchers , read on...

Barry got started the game on the wrong foot as he allowed a leadoff home run to Corey Hart, a single to Nyjer Morgan, and another home run to the returning Ryan Braun. After two outs, Casey McGehee singled and then Yuniesky Betancourt homered for a 5-0 lead Milwaukee lead. And in that top of the first inning, Kirk Gibson had Zach Duke start to warm up in the bullpen. Duke, who was sent to the bullpen to allow Enright to start, might get brought in as a psuedo-starter regardless. After five runs, six hits and 36 pitches in the 1st inning, Enright had a scoreless 2nd inning, but also allowed a home run to Rickie Weeks in the 3rd. Enright was done after three innings of work, six earned runs on four home runs, a disappointing return to the major leagues.

Arizona had most of their chances in the bottom of the first inning, trying to claw their way back in support of their troubled starter. Ryan Roberts was aboard first on an error and scored on a single by Justin Upton. Chris Young singled to put runners at the corners and Miguel Montero hit a shallow sacrifice fly to score Upton, which didn't even draw a throw from center fielder Nyjer Morgan. But Chris Young was picked off of first to end the inning, and that seemed to deflate the Diamondbacks balloon of energy and gave Yovani Gallardo what he needed to pitch six innings tonight for the win.

After two hits in the first inning, the Diamondbacks had only three the rest of the game, one of which was a monster home run by Brandon Allen to right field in the 5th inning. ESPN estimated it at 455 feet, but had the fourth tier of the stadium not been there, it would've gone another 250-300 feet. On the air, Daron Sutton read somebody's comment from Twitter that said it should've gone "780-800 feet, which by U.S. military standards is considered a bomb." Seriously. Monster shot. Watch the highlights.

The rest of the game was pretty much a lowlight. Allen's home run cut the score to 6-3, but Zach Duke (who had relieved Enright in the 4th inning) and Yhency Brazoban "fixed" that in the 6th inning. Duke loaded the bases on two singles and a walk, and Brazoban preceded to re-load them on two walks and a hit-by-pitch. Of course, Brazoban's ERA was saved only due to the spectacular play of Micah Owings, who came in and started a 1-2-3 double play and a groundout to clean up Brazoban's mess. Without Micah, it would've been a lot worse than 9-3.

Micah Owings pitched two innings with only one hit, Joe Paterson pitched the 8th inning and got two strikeouts, including one of Prince Fielder that made him look just plain silly. But Sam Demel came in for the 9th inning and gave up another two-run home run to Betancourt. Even Alberto Castillo started warming up but Demel struck out Corey Hart to keep the Brewers at 11 runs.

Kameron Loe came in for the 9th inning for Milwaukee and, despite a two-out hit from Miguel Montero, handled the Diamondbacks pretty easily. Kelly Johnson grounded out to second to end the ballgame. 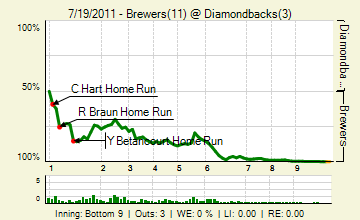 Nobody was stupendously funny tonight as it was not a terribly enjoyable evening, BulldogsNotZags had a good zinger about hitting Nyjer Morgan that led to the WPA titles, but COTD goes to...

Okay
Obviously, the D'Backs are trying to get the Brewers to score so many runs that the scoreboard resets and they have 0.

Joe Saunders goes tomorrow to try to right the ship, and if we don't see Ryan Cook in the bullpen in place of Brazoban, I will be very surprised. It's time to make some changes to prevent the season from becoming reminiscent of 2010. The Giants win tonight didn't help matters, so we need to get back on the winning train. See you tomorrow night!