A few weeks ago, Bob Melvin marked this weekend on his calendar, but not because his current team, the Oakland Athletics, were playing his former team, the Arizona Diamondbacks. No, he initially marked this series down as a homecoming for the Bay Area native as he worked as a radio commentator alongside Greg Schulte. Instead, Melvin finds himself in green and gold and managing against a very different team than the one he was fired from two seasons ago.

Melvin got the last laugh tonight as Oakland took the opening game of the series. Josh Collmenter struggled the third time through the order and home runs by Wily Mo Peña and Kelly Johnson couldn't bail him out. More details in the usual place.

It was Rich Harden's first start off the disabled list and his first start as an A since 2008, so nobody really knew what to expect tonight. (Honestly, I expected him to struggle a bit.) As it turns out, his changeup was working real well tonight as he struck out Kelly Johnson and Stephen Drew in the 1st inning and Miguel Montero in the 2nd. He struck out Drew and Montero again in the 4th inning.

Josh Collmenter handled the A's fairly quickly in the first two innings. In the 3rd inning, Josh Collmenter started to walk off the field after the second out, then allowed a single to Jemile Weeks which allowed David DeJesus to get to third, but Cliff Pennington flew out to Chris Young in center to give Collmenter his actual third out of the inning.

Wily Mo Peña got the Diamondbacks on the board first with a solo home run to the left field bleachers in the 2nd inning. The A's got even in the 4th inning, Hideki Matsui walked and stole second base (his first of the year) on a poor throw from Montero. That became important when, with two outs, Ryan Sweeney singled to score Matsui and tie the game at one apiece.

It was the third time through the order that doomed Collmenter once again. In the 5th inning, DeJesus and Sizemore hit back-to-back singles, and both scored with two outs on singles by Pennington and Coco Crisp. Matsui then doubled down the right field line to bring in Pennington and Crisp, the A's had a 5-1 lead, and Collmenter exited stage left. Sam Demel came in and got Chris Carter to fly out deep to left and the inning was over but the damage was done.

In the 6th, Kelly Johnson doubled, went to third on a wild pitch and scored on a single by Drew to get a run back and cut the lead to three. But with Chris Young at the plate, Drew was caught stealing for the third out. Rich Harden was done after 6 innings, only threw 77 pitches, and allowed four hits, no walks and struck out six.

Juan Miranda walked against Brian Fuentes to open the 7th inning and Gerardo Parra nearly hit into a double play but was safe at first. Then Kelly Johnson came up to bat and hit a deep home run to the center field bleachers to give the game a score of 5-4. Of Arizona's six hits tonight, two of them were home runs.

Aaron Heilman came in and had what seems to be a usual outing for him - he got two easy outs, then gave up a single and then another single that was almost an out, but he eventually got Weeks to strike out to keep it a one-run game going into the 9th inning. But Young popped out to catcher, Montero hit a deep fly ball to center, and Wily Mo Peña struck out swinging to end the game. 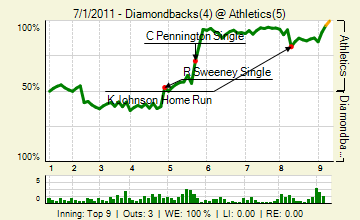 Not much offensive production tonight, something Kirk Gibson mentioned postgame. Only six hits, one walk and 10 strikeouts sounds much more like 2010's team. He also mentioned that Josh Collmenter has to learn to make adjustments the third time through the batting order. One of us mentioned it last week on Twitter I believe - it's tough having Duke and Collmenter be #4 and #5 in the rotation and often needing to dig into the bullpen early for both starters. We were lucky there was an off day yesterday, and I'm glad we have Demel back from the DL.

Had we come back to win, I would've given COTD to kishi for his Star Wars quote, but instead, it goes to this response to Oakland's upcoming MC Hammer bobblehead promotion:

Wasn't he a bat boy for the As?

And he was famous for being very possessive of the bats. He kept saying, "Can’t touch this."

I usually say "Day game tomorrow, folks" in my Friday recaps but I DON'T get to do that tonight because it's FIREWORKS night at The (O Dot Co) Coliseum tomorrow evening!! I'm sure they scheduled that just for me. Have a good weekend, everyone!