Josh Collmenter and David Hernandez combined to throw a three-hit shutout of the Brewers, and Ryan Roberts hit a two-run shot to get the Diamondbacks off to a good start in their four-game series against Milwaukee. Concerns about how Collmenter would fare, seeing a team for the second time, proved unfounded on this particular occasion. A storm hit downtown Phoenix shortly before first pitch, and dust seeped into Chase through the seams, but the game was not delayed. The Brewers probably wished it had been, as they got next to nothing off Josh, for the second time in a row.

Collmenter went eight innings, allowing three hits and no walks, and continued to right the ship, picking up his first W for Arizona in seven attempts, his last one coming on June 3rd. It was the second consecutive shutout appearance for our rookie, who threw six straight against the same opponents during his previous outing, before the All-Star break on July 6. Over 14 innings against Milwaukee, Collmenter has scattered six hits and one walk, striking out ten batters and allowing no runs. They'll be glad to see the back of him, I imagine.

By Game Score, this rated an 83, which would make it the second-best starting performance of the season by any Diamondback, trailing only Ian Kennedy's complete-game shutout of the Phillies on April 25th. It also drops Collmenter's ERA for the season to 2.65, and was the longest outing of Collmenter's career to date. He finished strongly, retiring all but one of the final 22 batters faced, with David Hernandez then pitching a perfect ninth to record his ninth save, on a mere ten pitches.

Indeed, the only time there was any real threat from Milwaukee was in the first, when non-Prince non-Fielder hit a bouncing ball into the hole at shortstop, with a man on second. Willie Bloomquist dived to stop it, and then threw home from his knees to get the runner there, who had made an ill-advised attempt to score, and was out by quite some distance. A bunt single to lead off the sixth was the other hit for the Brewers, and Collmenter took 105 pitches to get through his evening's work, 75 of them for strikes.

The offense didn't exactly set things on fire, but proved good enough. They got on the board in the third without hitting the ball to the outfield at all. A pair of infield singles and an error by the opposing starter allowed Arizona to load the bases with no outs. Gerardo Parra then hit into a double-play, but the run scored from third, to give the Diamondbacks the lead. Chris Young was thrown out at the plate to end the fourth, trying to score during a pickoff - just your average 1-3-2 caught stealing of home.

It added another to the D-backs tally of outs on the basepaths, which seems to have been increasing a lot of late. They are now at 45, third in the league there. Over at fangraphs.com, their UBR/Bsr stat, which measure the value of a team's baserunning as a whole, shows Arizona at +1.9, sixth-best in the NL. I seem to remember them being ranked rather higher, earlier in the season, which would tie in with my empirical observation that it has been an area giving them problems of late.

However, Arizona were able to do nothing more strenuous than trot around the basepaths in the bottom of the sixth. Justin Upton was robbed of at least extra bases in the outfield by a leaping catch at the wall, but Young doubled and Ryan Roberts tripled the Diamondbacks lead with his 13th home-run of the year. Both men had two hits, with Young adding a walk; Parra reached safely twice, on a hit and a walk, batting in the second-spot for the first time since May 12, and Willie Bloomquist had a couple of knocks at lead-off. 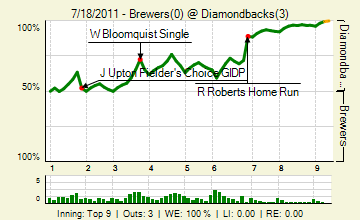