We entered the ballgame tonight looking to even things up with Los Angeles, something entirely necessary if we want to start the second half, y'know, not dropping a series to the Dodgers at home. Yesterday was entirely understandable; I'll accept a Saunders/Kershaw defeat, but an Ian Kennedy start is never one that you'll concede beforehand. Both Geoff Blum and Brandon Allen were making their 2011 starting debuts tonight, and quite frankly, I wasn't expecting a whole lot of production from our corner infielders. One double and a three-run dinger later, I may reconsider my expectations in the future. Hit the jump for more details on Kennedy's impressive outing and the newly-freed Brandon Allen.

Kennedy was firing from the get-go: he set the Dodgers down 1-2-3 in the first, and until the fourth, only allowed two hits. One of them was a big fly (actually, I sorta hate the term "big fly", but whatever) from Matt Kemp -- half as many as Kemp hit in the home run derby -- but past that, Kennedy cruised until the fifth inning. There really wasn't any threat early on, either. Kennedy simply had the Dodgers where he wanted them and breezed through their lineup, surrendering only a single to Tony Gwynn, Jr., after Kemp's blast -- of course, that also comes with the "until the fifth" caveat. Ian walked Aaron Miles to open up the frame, but quickly struck out Uribe to put the inning a GIDP away from ending. Dioner Navarro, however, had other plans, singling Miles over. After Kuroda sacrificed to the pitcher and Kennedy walked Gwynn, Jr., in an ugly at-bat, Rafael Furcal and his 25 OPS+ were walked to bring home the second Dodgers run on the night. Worse yet, the bases were now loaded for Ethier and Kemp, giving the game a far more grim outlook than innings past. Of course, being Ian Kennedy, the 26-year-old got Ethier to pop out weakly to end the threat there.

The offense, on the other hand, was nothing if not surprising. Kelly Johnson doubled to start the bottom half of the first, but never moved past second base with the slumping duo of Stephen Drew (batting .171 in July) and Justin Upton (batting .186 in July) and Chris Young failing to get him home. They'd waste no time jumping on Kuroda in the second, though: Montero singled to get things started, Geoff Blum doubled to continue them, and Brandon Allen crushed a ball to left to finish them. The lead was two after Allen's three-run bomb, and with that at-bat, I'm thinking we should just keep calling him up and sending him down. He seems to fare pretty well in his first starts with the big league club. The Diamondbacks didn't do a whole lot after that (unless you want to count Stephen Drew's out at third, trying to stretch a double into more in the third frame), getting just one more man on base for the rest of the game on a Miguel Montero walk.

Kennedy was pulled in the eighth in favor of Joe Paterson, who fulfilled his job as a LOOGY pretty well, retiring Andre Ethier before handing the ball over to Sam Demel. Demel paved the way for David Hernandez, setting down both Kemp and Juan Rivera (since when is he a Dodger?) with relative ease. Hernandez -- five of five in save opportunities since being thrust into the role after J.J.'s injury -- got to skip both Ethier and Kemp, instead facing the much more favorable 6/7/8 hitters of the LA lineup. Although he struggled to find the zone at times, Hernandez nailed it 1-2-3, striking out Navarro to put the game in the books. It gave Ian his tenth win of the season (according to Jim, that's the first time we've had a pitcher hit ten since Haren in 2009), and more importantly, puts us in position to take the series from Los Angeles with Hudson heading out to the mound tomorrow. Woot! 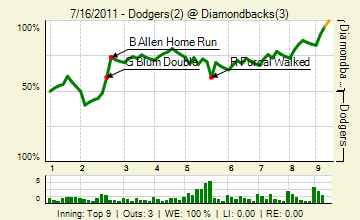 only at the plate

after the game is a completely different ballgame

If I weren't so lazy, I'd go looking through my recaps this season to see how many have said that "tomorrow's game is the rubber match". I'd wager it's dangerously close to, like, 80%. Anyway, Hudson faces off against Lily tomorrow as we look to take the series from Los Angeles. Insert obligatory #BeatLA here.