When I volunteered for this recap, I failed to note that the match-up was Joe Saunders vs. Clayton Kershaw.  Yikes.  Seeing as how you all can read the title of this recap, you all know that this one went pretty much how you'd expect it to.  The gloomy details after the jump.

After Saunders had a swimmingly-effortless first inning, the D-backs were able to put Kershaw in a jam.  Willie Bloomquist lined a very versatile single to right field after fouling off some tough pitches, then stole second base on an awful throw from Dioner Navarro - even a mediocre throw would have nailed Bloomquist.  After Kelly Johnson hit a fly ball to the warning track in left field to move Bloomquist over, Justin Upton hit a fly ball plenty deep into center field, but Matt Kemp made a remarkable throw home to nail Willie.  It has to be noted, though, that the throw was enough up the third base line that Bloomquist probably could have slid around Navarro safely had he decided it prudent to avoid the defenders while trying to score.

That seemed to deflate some of the air in Arizona's balloon, and sure enough, Saunders quickly gave up a pair of absolutely blistered fly-balls.  The first, from Matt Kemp, was held by the deepest part of the park, but newly-acquired Juan Rivera's first hit as a Dodger was an absolutely blistered home run to left field off of his old Anaheim teammate.  Saunders quickly righted the ship, allowing just a seeing-eye ground ball single up the middle in while collected the next two outs to end the inning.

Saunders then ran into trouble again in the fourth inning, as Rivera roped a two-out single off of Saunders.  The big at-bat of the inning, though, was from James Loney, who drew a walk to move Rivera into scoring position.  Naturally, a measly ground-ball single through the left-side hole from Dioner Navarro was enough to score Rivera, particularly since Bloomquist was in left field.  Saunders got a groundout up the middle to end the inning, but the damage was done and Arizona was in a seemingly-insurmountable 2-0 hole against Kershaw.

Meanwhile, Kershaw was, well, Kershaw.  Having faced the minimum through three despite Bloomquist reaching in the first, Kershaw decided to make the feat a little more spectacular by picking Bloomquist off of first after allowing a lead-off single in the fourth.  With a fancy play from Matt Kemp in center field to rob Justin Upton of a hit, Kershaw faced the minimum through four despite allowing a pair of hits.  The streak was broken up in the fifth by a two-out single from Ryan Roberts, but two-out rallies don't happen against Clayton Kershaw... he quickly set down Miguel Montero to end that threat.

Kershaw cruised through the sixth inning, working around a Bloomquist walk (surprisingly, Bloomquist didn't make an out on the basepaths).  Geoff Blum made his first plate appearance as a D-back in the inning, pinch-hitting for Saunders... against the lefty Kershaw.  Here's a few numbers: career vs. RHP: .305 wOBA, 83 wRC+, career vs. LHP: .273 wOBA, 63 wRC+.  Yeah, send him up against one of the best left-handed pitchers in the league.  That makes a ton of sense.

Aaron Heilman came on the seventh for an inning of relief and loaded the bases with two out, although one of the baserunners came on an annoying broken bat infield bloop to Juan Uribe.  That brought up Matt Kemp, who did exactly what you'd expect Matt Kemp to do against Aaron Heilman.  He absolutely blistered a ball through the left-side hole, plating a pair and putting Los Angeles up 6-0.  Those two runs proved paramount, because...

An error by third baseman Juan Uribe led to a run by Arizona in the seventh - Kershaw would have had a 1-2-3 inning without the error.  A walk and a single followed the error to score one, then Kershaw's 107th pitch of the night, to Nady, was a center-cut fastball at the belt.  I mean, a batting practice fastball with some velocity.  But good for Nady that he crushed it.  Not enough for me to change the above paragraph (it was too much fun to write for me to just go and delete it...), but a positive sign that he can maybe, just maybe, not be a below-replacement-level hitter on the year.  A man can dream, right?

Micah Owings worked around a lead-off walk to post a clean top of the eighth, and Mike MacDougal did the same in the bottom of the eighth.  Alberto Castillo, throwing from a low arm slot in the upper-80s, managed to retire a switch hitter (Rafael Furcal) and a right-handed hitter (Juan Uribe) before getting the lefty Andre Ethier to ground out in a rather impressive 1-2-3 top of the ninth inning, giving Arizona three outs to work with, still behind two runs.

On to close for L.A. was Hong-Chih Kuo, the devastating lefty that Arizona fans have become all too familiar with when he has managed to stay on the Dodgers' active roster.  Stephen Drew, up against one of the most devastating lefty-on-lefty pitchers around, had an infield pop.  After a Ryan Roberts walk, Miguel Montero came up - yet another left-handed hitter against the devastating-on-lefties Kuo.  Naturally, Montero K'd.

This brought up Xavier Nady to the plate, which in turn brought Javy Guerra in from the Dodger bullpen.  Nady tapped a chopper up the middle, which brought Brandon Allen up to the plate with two out, runners on the corners, and two outs.  Allen worked a 2-2 count, then took ball three, about two inches below the bottom of the kneecaps and just as far outside.  Naturally, it instead was an absurdly late call strike three.  Well, I guess #BrandonAllenCouldHaveDoneThat... I think Albert Pujols could have, too, with that strike zone.  Crappy way to end a crappy game.  Allen's reaction after the late call said it all, really. 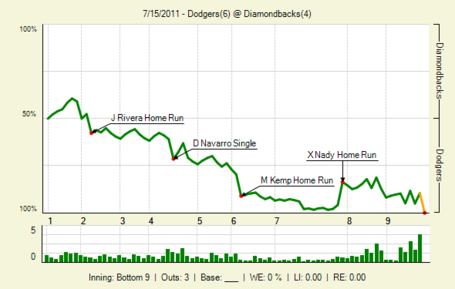 Brandon Allen Definitely Could Have Done That: Justin Upton (-17.2% - kudos to Matt Kemp for this one)

Obvious call for CotD, on the state of the Dodgers' closer situation:

is doing a pretty good job of closing the Dodgers out…

"Fangorn Forest. What madness drove them in there?"