Tonight's game was the second time I drove down to the central business district of Phoenix, fought the traffic, and paid for parking.  I'm not complaining, but it does involve a certain amount of tedium.  Luckily the two trips were both for very memorable reasons, and I feel very blessed to have been part of either.

The first was a series of interviews Phil and I were able to conduct with various Hall of Fame  players, one former All-Star (and certainly soon to be Hall of Fame) player, and one current All-Star and Diamondback.  More information to follow, but look out the next couple days for the features we'll be running.

The second event was obviously what we all had been waiting to experience, what we have been writing, thinking, and obsessing about.  I'll avoid being too repetitive about what you may have already seen on TV, but instead focus on the general experience inside the park.

Our All-Star Day started rather early at 7:30AM with the drive down to the Convention Center for the interviews.  After a quick drive back to Scottsdale to have lunch with our better halves, Phil and I loaded our separate cars and made the trek back to downtown Phoenix.  The traffic fairly light, and although the off-ramp at 7th Street was overloaded, once we were actually working through Downtown, things actually were quite smooth.

First, a quick aside.  Yes, I am the person who ignores the "BASEBALL TRAFFIC USE 7TH AVE EXIT" signage, and insist on using 7th Street.  I like it, I don't care what Phoenix says, they're not the boss of me.  In relation to my own stubbornness about which routes I take in Downtown, I have to applaud the City's (and I assume the Police Department's) planning and execution for traffic around the ballpark.  Getting to a garage and out were less painful than regular season games.

Once out of our car and on the ground, we made our long journey from 4th Street to Chase Field.  I feel winded just thinking about it.  As we approached the front of the stadium, my wife and I saw a curious group holding signs.  Hoping it was Anti-SB1070 folk, I approached to get a better look.  Nope, it was just religious people.  Nuts.

We made our way through the gate, and I was given barely even a stinkeye for my big camera bag.  I don't mean to be glib, given some of the events that have happened in Arizona, but you would think security would have a bit more concern for such a big event.  Maybe I don't look threatening.  Anyways, the past two days we've been given swanky lanyards to hold our ticket stubs.  I was really hoping for an All-Star Game lanyard to Complete My Collection, but no such dice.  Instead we got a pin, which is nice, but I really wanted a lanyard.  I saw some old guy after the game with one and I was like, how did he get one, and I figured no one would say anything if I took it, but then he toddled away so I didn't.

After getting out the rock climbing gear we scaled up to our seats and waited for Phil and Jenna to arrive so we could get our pictures all taken.  It looked like this. 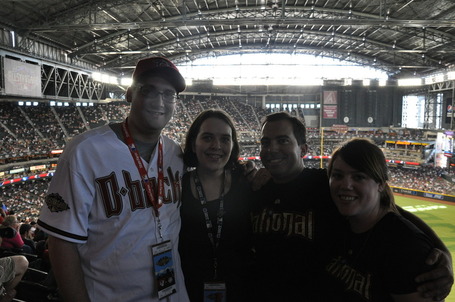 No one told me we weren't supposed to wear white after Labor Day or to Snakepit All-Star Meet-ups.  We were going for a German Expressionism lighting design.

While cruising up an escalator, I randomly asked a couple behind us in Rockies gear if they had traveled from out of state to the game.  Amazingly, they said yes.  One had gone to the Denver game in 1998, but the other had missed it.  So maybe the All-Star Game really does bring in outside money and doesn't just recirculate entertainment dollars that likely would have been spent anyways!

For the opening ceremonies they put a big flag on the field.  It was really big. 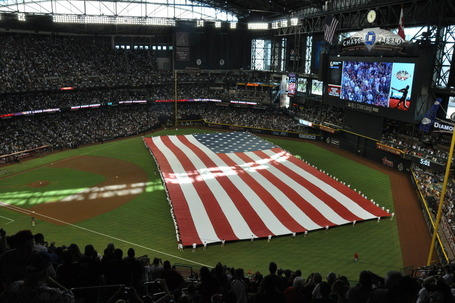 The lineups was pretty boring, though I must note that the two Diamondbacks received the loudest cheers by far.  Sorry, Every Baseball Fan Of Every Other Team That Lives In Phoenix, but Chase Field is not your home stadium and the All-Star Game just proved it again.  I thought booing some of the other players was a bit lame, but what do I know?  The All-Star Game is a bit like a soccer game between two warring nations on Christmas; sure you want to win for the sport of it, but it's meant to be about goodwill.  Let's be friends, people, for just one day.

The opening ceremonies were predictably bittersweet.  I'm not sure what was shown on-air, but the victims of the Tucson shooting were honored, and Daniel Hernandez threw out one of the first pitches.  We like to believe that our choices of recreation keep the world at bay and create a temporary oasis, but that's not true.  We can't escape the context.

Soon it was time for first pitch, so I made a stop motion video of it.  Here's a frame from the middle of my future Christmas classic: 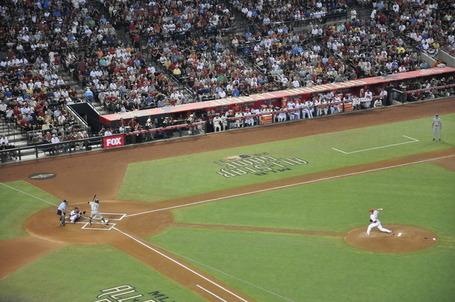 But the game!  The game was a game of baseball, and they played 8 1/2 inning because the home team was winning by that point and the umpires felt bad for the hapless American Leaguers.  Better luck next time, Junior Circuit.

At one point the guy next to me said it was cool I was keeping score, and that it must be complicated.  Well, yes, let me show you. 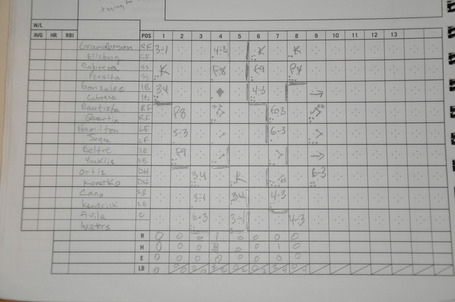 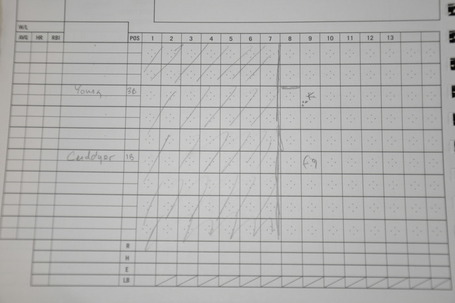 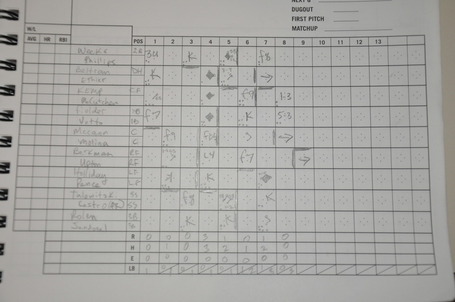 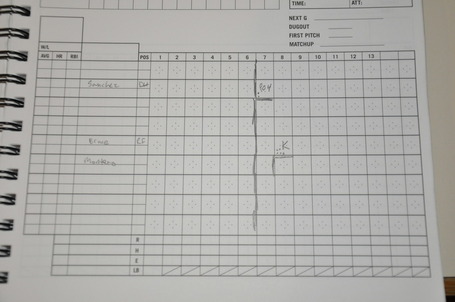 Was it a game I'll tell my children about?  Well, yes.  Not for the game itself, perhaps, but certainly for everything leading up to it and all of the events.  Perhaps the game will have more significance if Prince Fielder is eventually considered an All Time Great, and I can say, "I saw him hit a 3 run bomb in an All-Star Game."  But it was a good game, with a good result.

The crowd felt good and full, though it is hard to root for random players.  Things were certainly jumping on good plays, but I didn't hear a single "Let's go NL" chant or anything.  We are not united after all.  There was a funny moment during Robinson Cano's first at-bat, however, when some random Yankees fan in the next section over tried to start a "Let's Go Yankees" chant.  Another Yankees fan (in full regalia), stood up and yelled at the first guy, "Hey!  Stop chanting, he's trying to hit here!"  Kudos to you, fan wearing a Jeter shirt (so rare, I know).

What more is there to be said that hasn't already been said?  It's been a long, glorious weekend of festivities.  There will be still some unwinding for the next few days, but this is the end, my friends.  We just haven't realized it yet.