Ok, if the truth be told, the Diamondbacks on the NL roster didn't actually do too much in the "securing"; Justin Upton went 0-2 - extending our hitters streak of futility to six consecutive All-Star Games - while Miguel Montero was left on deck as Jay Bruce struck out to end the NL eighth. Indeed, it was our nemesis, the loudly-booed Prince Fielder, who was responsible for the bulk of the National League offense, hitting a three-run homer off the top of the wall in left-center during the fourth inning. He was named MVP of the game.

The NL West did its part, with RBI from Andre Ethier and Pablo Sandoval. On the pitching front, Clayton Kershaw, Heath Bell and Brian Wilson combined to retire all six batters face. Wilson retired the final two batters in the ninth, stranding the potential tying run in the on-deck circle. He got Phoenix native Paul Konerko to ground out to short for the final out of the game, securing back-to-back victories for the Senior Circuit, for the first time since 1996. Montero did get to catch the final inning, the first appearance in the game by an Arizona catcher for almost a decade, the last being Damian Miller during the 2002 tied game in Milwaukee.

I have to say, it felt like a pretty 'meh' All-Star Game, without an enormous amount to make it stand out in the annals of Midsummer Classics. The first three innings were scoreless, the only point to note Josh Beckett's failure to get into the game, having apparently experienced knee stiffness during his warm-up tosses. He was replaced by Yankees' set-up man David Robertson. Offense was a premium in that first third, the various pitchers combining to face one batter over the minimum through those opening three frames. Lance Berkman had the only hit, but was promptly erased on a strike 'em out, throw 'em out double play to end the bottom of the second.

Both offenses woke up in the third. Adrian Gonzalez homered off Cliff Lee, and two more singles saw Lee replaced by Tyler Clippard. He allowed a single, but a good throw from Berkman got the runner at home, and because of what transpired. Clippard got the W. Interestingly, it was the second consecutive year the winning pitcher faced only one batter - Matt Capps did it for the NL last year; it had never happened before that in All-Star history. Indeed, it has been more than three years for an NL pitcher in any game to get the W, despite allowing a hit to the only batter faced: the last to do so was Pedro Feliciano of the Mets in July 2008.

C.J. Wilson came in for the American League, but an infield single by Carlos Beltran was followed by a hit to left from Matt Kemp, setting the scene for Fielder's shot just to the left of the batter's eye. The National League tacked on another run in the fifth, Ethier driving home Rickie Weeks, though the Dodger was caught trying to advance on the throw. And in the seventh, Hunter Pence was able to go first to third on a passed ball, putting him in position to come home on Sandoval's double down the left-field line, which bounced over the outfield fence. That completed the NL scoring, who outhit the AL 9-6.

The National League used a total of ten pitchers on the night, the most ever by them in a regulation All-Star Game. Bruce Bochy slowed things down in the later innings, using five different pitchers to record the final seven American League outs. Roy Halladay was probably the pick of the bunch retiring all six AL batters faced, with Jair Jurrjens allowing one hit in 1.2 innings of work. Heath Bell certainly had the entrance of the night, sprinting in from the bullpen, to arrive at the back of the mound with a slide. I could hear the Chase Field groundskeeper wincing at the divot his cleats dug out of the turf. 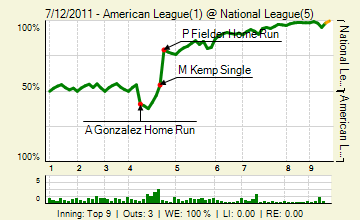 The Star Spangled Banner has certain notes in it, has been since the war of 1812. THEY DON’T NEED TO BE CHANGED.

Founder of the 'Foundation for the Advancement of Clefoing' a 501C3
"I'm like if it fits in the oven, play ball." - soco
Promised Colin Cowgill fifteen sandwiches on 7/6/2011

soco will be back late tonight, with our eye-witness report from Chase Field. That will end our formal coverage of the All-Star Game, but we still have things coming up - the Diamondbacks have two more off days between now and the start of their second half on Friday, so we'll be keeping you occupied with a bunch of stuff, as we reflect on the All-Star Game's first trip to Phoenix, and what the Diamondbacks might do in the second-half.