Embarrassment In A Good Cause: Cal Ripken and I Go to Bat For The Boys' and Girls' Clubs

Share All sharing options for: Embarrassment In A Good Cause: Cal Ripken and I Go to Bat For The Boys' and Girls' Clubs

To kick off the Derby we are hosting the third annual Go to Bat Media Event with local Boys and Girls Club kids and Cal Ripken, Jr. I'd like to extend an opportunity for you to come out to the batting cages located inside Fan Fest at the Convention Center and got to bat for Phoenix youth. The event pairs local media celebrities with a local Boys and Girls Club kid, giving you a chance to swing for a homer, as State Farm will also make donations for each big hit you and your Boys & Girls Club teammate hit during the Go to Bat Media Event.

To ensure plenty of long balls are hit (and donations to the Boys & Girls Clubs are made), Hall-of-Famer Cal Ripken, Jr. will be on-hand to give you and the kids batting tips, and will also be available to talk with media. Please let me know if you are interested and able to come out and take some swings. Thank you!

The three things that came to mind on getting this email were, in order of arrival: 1) Cool! I get to meet Cal Ripken! 2) Wait, what? I'm a "local media celebrity"? 3) Jim, hang on a moment - haven't you forgotten something? For my dirty little secret is, although I devote a vast chunk of my spare time to watching, writing about and analyzing the game, I've never played it. Literally, never. It's my upbringing of course: there's no Little League in Scotland, so I came over to the US, in my mid-thirties, with a couple of games of after-work softball as the closest to participating in America's pastime. And, let's be honest, those games were more an excuse to go to the pub afterward.

Even here, my entire experience of the game is one session in the batting cages at Crackerjacks, when I was there for a kid relative's birthday party. Live pitching? Never seen it. But, hey, if you are going to take up the game, might as well start at the top, with the man throwing the balls being a 19-time All-Star who was elected to the Hall of Fame with the third-highest percentage of ballots in Cooperstown history. The man is a legend. Surely even being in a 30-foot radius of Cal Ripken Jr. would give me +3 to hit, imbuing me with supernatural powers of sheer awesome. What could possibly go wrong? Wrong? I'll show you...

Part of me wants to leave this video as one of the great lost epics of badness, to be spoken of only in hushed tones and eventually becoming the baseball equivalent of The Day The Clown Cried. Or I could just label the above: "Baseball: UR DOIN IT RONG" and move on. But let's note in particular that Ripken abandons the pitching machine to come out in front of the screen and lob me slow-pitch balls. Which I then completely fail to hit. Repeatedly. I did better off the pitching machine. No, really! Ok: if "better" is a stretch, weak ground-balls were a clear improvement over...well, what you see above. I was about to beg for a hitting tee when Cal called me out of the batter's box...

But let's pause there. Insert cinematic flashback device, and I'll tell you what had led up to that moment. 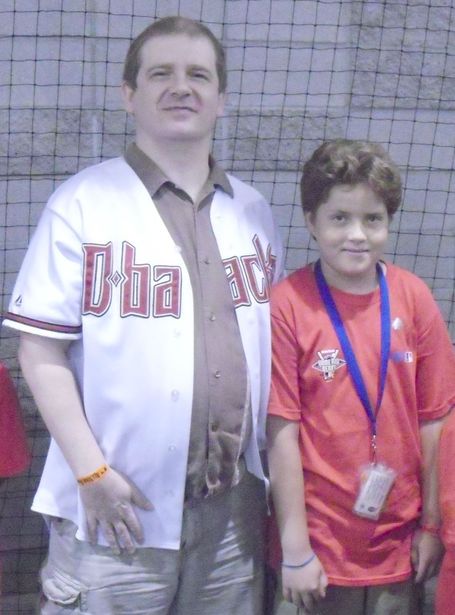 So myself and official SnakePit archivist Mrs. SnakePit arrive at the event and join the other nine local participants, including Doug Franz from KTAR - whom I recognize purely because he has FRANZ across his back. Hey, it's radio, what can I say. We are paired up with our kids: I had nightmares about being teamed with some uber-prodigy who would embarrass me totally, but when I meet mine - Brandon from Apache Junction - I am relieved to discover that he doesn't really play baseball either, telling me he prefers golf or bowling. That makes me feel a lot less nervous, though Brandon's swings are by no means bad.

I am also relieved to discover that State Farm's donation is pre-determined, so not actually based on how many hits or home-runs we get. This takes a lot of pressure off, as I had also imagined the Boys and Girls Clubs weeping inconsolably after they receive a check for the grand sum of fifteen cents, based on my baseball prowess. Phew. This just could be fun, I thought, and it helped when I saw some of the other media reps. While, obviously Franz was no Sunday hacker, a good few of my colleagues were not exactly All-Star caliber.

Amusingly, I did get to put some of my more technological skills to use. Batting in front of me was a woman, who asked if I'd mind filming her while she was in the case. "No problem," I said - expecting an Android phone, or maybe a little hand-held camera. "Here you go," she said, going over to pick up what was basically a fully-fledged TV news camera. Turned out she was a one-woman reporter for Telemundo, so I also got a crash course in the art of cinematography i.e. which button to press to record, and which to make it stop. So, if you ever happen to be channel-surfing and spot some footage of a reporter swinging in a baseball cage, I'm behind the camera. Even if it looks like the folks from The Blair Witch Project were responsible.

End flashback sequence. To remind you where we were before we drifted off, I had just been called out by Cal Ripken, in order to explain what I'm doing wrong in the batter's box - even though "everything" is probably a pretty good summary. Fortunately, I had explained in the pre-session meeting that I came from Scotland and had no clue about what to do. "Oh, there's some pretty good athletes from there, aren't there?" he had replied - I'm still trying to think of some, except for that bloke on the bike. Somehow, Colin Montgomerie and Dario Franchitti don't quite cut it as role models.

Anyway. Ripken told me the grip was key, and in particular use of the wrists. I was basically keeping my wrists stiff and locked while swinging through the ball, when the correct approach is to use them to increase the bat speed during the swing. A few demonstrations from the master followed, and I tried to reproduce the actions as best I could. Back to the screen went the Hall of Famer, and more pitches came my way. Now, I'm not going to claim I suddenly achieved major-league levels of ability. But it certainly made a difference, as the video below shows. I went from 'irredeemably awful' to merely "not very competent".

Sure, I still missed a few. Ok: quite a few. But at the risk of stating the bleedin' obvious, Cal Ripken knows what he's talking about with regard to hitting a baseball, and it's amazing what a few simple tweaks can do. When it comes together, and the ball pings off your bat... Man, that's a sweet feeling. Though I have to say, I can still feel it in my arms and wrist, more than 24 hours later. I see why baseball players tend to have forearms the size of small oak-trees. Additionally, I have a new, deep respect for what is involved in trying to hit the ball when someone is actively trying to stop you doing so. It's hard enough when someone is helping.

But the main thing is the sizable - in both senses of the word - check that the event raised for the Boys' and Girls' Clubs of Arizona. It's part of a State Farm's ongoing series of charitable events, which culminated in last night's Home Run Derby, where the slugfest raised an impressive $603,000 for charity. Local chapters of the B&GC received $120,000, with eight members each paired with a contestant in the event. And if you want a bit of fun, sign up for State Farm's Go To Bat campaign - you pick a charity, and play a surprisingly tricky i.e. addictive flash game, which also helps generate more funds for your chosen organization [and can win you a trip to the World Series!] 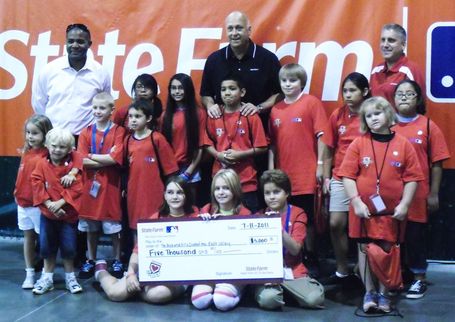