Man, that was a day and a half. Just to give you a sneak peak of what to expect on the SnakePit over the next couple of days, it started with me chatting to Chris Pratt, who plays Scott Hatteberg in the upcoming Moneyball movie, moved on to personal batting lessons from none other than Cal Ripken, followed by meeting some of the ladies from the All-American Girls Professional Baseball League - and only then moved on to Chase Field for the Home-Run Derby, which is what I'm actually supposed to be writing about here. So much really cool stuff in a single day. Dammit, I wish the All-Star Game were here every year.

After the jump, the view from Section Three-Oh-Nosebleed.

In contrast to yesterday, where we had managed to blag our way into a section, conveniently located near the concourse and Snake Bites, for today, we were exiled to the outer reaches of the Western Spiral Arm of the Diamondbacks universe. I'm not saying we were high up, but we could look down and see eagles circling between us and the playing field. Actually, for the purposes of this event, those were not bad seats. With it being heavily left-handed dominated, most of the bombs were down our line, and our location gave us a good angle to appreciate the power on display. We could actually see the balls better in person, than on DBTV.

On the other hand... Man, the rake of the seats would induce vertigo in a free-climber, and there is very, very little space between your seats and the row and front, so moving in and out required the skills of a parkour expert. Having climbed up 26 rows to get to our location, Mrs. SnakePit sat down with a finality last seen when the conquistadors arrived in Mexico. While her belief that there were no concessions - or, indeed, breathable oxygen - up in the three-hundreds proved unfounded, it was clear that there would be no trips to Coldstone Creamery for the duration of this one. We would somehow have to fend for ourselves and live off the land for the next three hours.

The format of the event had been tweaked a little this year, to add a AL-NL contest element. However, that proved an unmitigated disaster. as the result prove pre-ordained as soon as only one of the National League players made it out of the first round. Nobody much bothered to mentioned it after the first round, and given the final score - 76-19 in favor of the American League - I suspect that particular experiment will be buried and forgotten by the time the 2012 event rolls around in Kansas City.

While most of the players' introduction were met with fairly warm reception, the two Brewers, Prince Fielder and Rickie Weeks, received a thoroughly hostile greeting from the Chase Field crowd. It was clearly that the local faithful had not forgotten who, respectively, had been responsible for excluding Justin Upton from the event, and was seen as having taken Upton's place. Fielder did redeem himself somewhat, with his performance, particularly in the playoff at the end of the first round, where he went 5-for-5. Weeks, on the other hand...

He whiffed entirely on his first swing, provoking loud boos, and it wasn't long before a fully-fledged revolution broke out in the stands, with a marvelously-loud chant of "Just-in Up-ton" reverberating around, followed by 'We want Upton" as Weeks continued to fail and flail, eventually being eliminated with an embarrassingly-low final tally of three, to even louder cat-calls. Personally, I thought it was great, as this was Arizona fans showing passion and devotion, without the slightest prodding from the Jumbotron. And it was fully justified: I've little doubt Upton would have delivered better than Prince's mate Rickie. Any pain Fielder's kids felt was entirely his responsibility.

As the event continued, it was clear that the right-field bleachers was the place to be, with Adrian Gonzalez and Robinson Cano putting on a clinic of power hitting, combining for 61 home-runs between them over the three round [and Cano's final round finished barely half way through]. The domination of those left-handed betters was enough to make me wonder whether the Diamondbacks might do well to invest in a southpaw slugger to man first-base this winter. Is Chase particularly left-hander friendly? The only LHB to have 25 HR for us since 2005 were Adam LaRoche and Kelly Johnson last year.

I have to say, the distances quoted for the home-runs seemed horribly inaccurate half of the time. One pinged off the facade of the Arizona Baseball Club in right-field was listed as less than one which dropped into the bleachers there, well in front of the sign? Go figure. Still, I think the most majestic blast was the one crushed by Cano in the final round, which hit the scoreboard that usually displayed the opposing team's line-up. Man, having spent some of the morning taking some hacks at the FanFest, I had a keener appreciation of the impeccable combination of timing and power necessary to result in such an event. 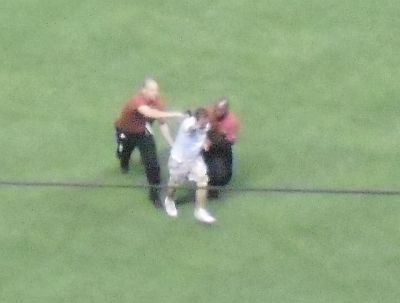 We were also amused - albeit briefly - by the attempt at a pitch-invasion, which was rapidly quashed (above) before getting too far out from right-field. I don't know if it was an SB-1070 protest, but if so, it came off as a dismal failure. In fact, we saw absolutely no sign of any protests the entire day, or of anyone wearing wwhite ribbons to show your objection to the law. However, I think I've come up with a proposal to amend the law which would receive unilateral support. Just make it that police must detain and deport any individual where reasonable suspicion exists that they are a Yankees fan. Far too many of them rattling around Phoenix.

All told, it was a fun event, and by most accounts, I didn't miss much by not being too subjected to the ESPN coverage of the event [which I can hear Mrs. SnakePit viewing from the bedroom]. It's the kind of thing you probably only get to see once in a lifetime, and I'm glad we went. However, it may be a while before I can coax Mrs. SnakePit to sit in any section that starts with a number three again...