Share All sharing options for: All-Star Diamondbacks, #2: Gonzo Rocks The Vote in 2001

Today's the Home-Run Derby at Chase, in which some of the most feared sluggers in the game (as well as Rickie Weeks) will be lining up to try and take advantage of the hitter-friendly conditions at Chase Field. Will anyone be able to knock a ball out of the park? Is the Jumbotron in Richie Sexson-esque danger? It should be fun regardless, and it seems a perfect opportunity to get back to our countdown of the five most impressive All-Star performances by an Arizona Diamondback.

For this entry didn't take place in the game itself; instead, it was another highlight from the magical 2001 season, in which Luis Gonzalez outslugged Barry Bonds and Sammy Sosa, on his way to winning the Home-Run Derby that July in Seattle.

Only two Diamondback position players have ever been elected to start in the All-Star Game. In 1999, Matt Williams crushed all-comers to take third-base, with more than double the votes of the second-place finisher, Chipper Jones [I think it is kinda cool that Jones will be playing in the All-Star Game this year alongside Justin Upton, who had just turned six when Chipper made his MLB debut in 1993!]. He was joined there by Jay Bell, who pipped Craig Biggio by barely thirty thousand ballots. And in 2001, Luis Gonzalez had a blistering first-half and became the last, to date, Diamondback to be elected by the fans to start the game. Here are the voting figures for both leagues from that year.

There doesn't seem to be much evidence of 'East -coast bias' here, something often mentioned as one of the problems of Arizona players seeking to get elected. It seems to make sense - many games on the West coast are barely under way when the East coast is turning down its' sheets and heading for bed - it's harder to achieve name recognition when you are performing while half the country slumbers. But before we get to Gonzo's 2001, I thought it might be interesting to see whether there is anything to it.

There have now been 14 All-Star Games since the National League expanded to 16 teams in 1998. That's 112 players elected to start (there was a DH as part of the NL line-up in 2005, given to the man with the highest total of second-placed votes, which turned to be Albert Pujols). The chart below shows, in blue, the number of selections each team has won since 1998, and next to that in red, the number of different players to have been selected - the latter helps identify cases like the Giants, where the vast majority of selections are due to one individual. 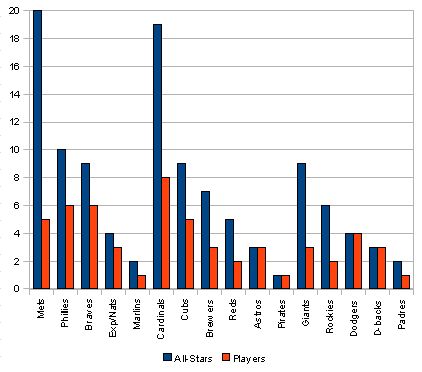 This does seem to show a bias, not so much in favor of the East - the Central does well enough - as against the West: the entire division combined, has not many more (24) players voted in than the Mets (20) or Cardinals (19) by themselves. During the fourteen years covered. the NL East has averaged nine selections per team, across 4.2 players. The NL Central got 7.3 selections over 3.7 players. But the West only 4.8 selections and 2.6 players per franchise. This doesn't reflect the strengths of the divisions either: in thirteen completed seasons, the West and East have each provided five NL pennant winners, with the Central taking it three times.

What's notable is the way the selection skew appears to be increasing of late. Since the end of the Barry Bonds era in 2007, of the 32 players voted in to the starting line-up, a mere two came out of the National League West, both of them from the Dodgers. [Pending a replacement for Jose Reyes] This may not just be fan bias: the last NL West player to win Most Valuable Player was back in 2004. However, it's hard to argue it's a complete prejudice, when nine of the last dozen NL Cy Young winners, have come out of the West, as have eight of the All-Star starters. Maybe the West is just a division where pitching is valued more heavily than hitting.

But it does make Gonzo's feat all the more impressive, becoming the last D-backs to make it in to the All-Star Game by popular acclaim. And it was fully warranted, as in the first-half of the season he batted .355 with 35 home-runs in only 87 games. To give you some scale for that, only three men in franchise history have more four-baggers over an entire season, than Gonzo managed in those first 87 games. No wonder he was selected for the Home-Run Derby, which had probably the most stellar field in the history of the event - even if some of the names certainly deserve to have asterisks placed beside them.

The eight participants and their 2001 home-run totals were as follows. Barry Bonds (73), Brett Boone (37), Jason Giambi (38), Troy Glaus (41), Luis Gonzalez (57), Todd Helton (49), Alex Rodriguez (52) and Sammy Sosa (64). That's an average of 51.4 home-runs per participant: consider that only two batters in the majors even reached forty home-runs last year, and you'll appreciate how radically the offensive landscape has changed in the past decade. But it wasn't quite the bomb-fest you might expect.

The first round say a total of only 37 home-runs hit by those eight sluggers Glaus managed none at all, and Sosa's three were enough to reach the second round, along with Gonzalez (5), Bonds (7) and Giambi (14). The knock-out phase then saw Luis face Barry in the semi-finals, but Bonds left Safeco Field a mere three times, compared to Gonzo's five homers. In the final, he then faced Sosa, who had beaten Giambi 8-6 in his semi-final. However, Sammy wilted under the pressure, and Luis Gonzalez cruised to victory by a margin of 6-2. Here's what he had to say afterward:

"'m kind of in a fog, especially compared to those guys going into the last couple of rounds... This has been an incredible day for me today. I was so nervous coming out there, this being my first Home Run Derby. To get past the first round and then the second round, and to look up there and go, 'Gee.' I was just hoping I'd fare well out there -- to hit one or two...  Once I got past that first round, I was kind of a little bit more at ease."

As for the game itself, Gonzo went 1-for-2. singling to lead off the fourth inning. He was not able to play his usual spot of left-field - some "Bonds" guy had that taken - so moved over to start in center, a position he filled less than a handful of times in his entire major-league career. But it was still a memorable game. He told us earlier this year, "I was also in the outfield when Cal hit that home-run off Chan-Ho Park. I got goosebumps, and I was on the other team. There were so many fun times, and you also sit around and try to pick the brains of the other guys on the team, see how they mentally and physically prepare for games, what their pre-game rituals are - it's pretty cool."

But it's for taking home the title in the Home-Run Derby to end them all, that Gonzalez will be best remembered, and it's that which brings him to the runner-up spot on our countdown.