Y'know, I could find reasons to be frustrated in a lot of ways by how this game went.  The offense's inability to do anything of worth for seven innings.  J.J. Putz blowing his second save of the year.  The inability of the offense to put up even one run off of Pirates reliever Daniel McCutchen in the top of the eleventh after putting runners on the corners with no outs.  The thing is, though, that I'm not actually frustrated about any of those things.  The entire series of events in tonight's game and what really has me frustrated after the break.

Pittsburgh had one of their more tenured players on the mound tonight in Paul Maholm, in his seventh season in a Pirates uniform, facing off against former-Pirate Zach Duke, who was once one of the team's top prospects.  The game proved to be a true pitcher's duel, though each guy had unique ways of keeping runs from crossing the plate.  Maholm struck out four in six shutout innings of work, allowing three walks and hitting a batter but surrendering just one measly hit, continually getting the D-backs bats to hit his pitches straight into his fielders' gloves.  It was a peripheral tight-rope act, but one that worked, with Maholm being pulled after throwing 94 pitches and lowering his season ERA to 3.39.

Duke, on the other hand, struck out just one batter and allowed a staggering nine hits, but made it through a seven-inning outing having surrendered just one run.  He did so largely due to his refusal to hand out any free passes, instead riding his eight ground-ball outs into Quality Start Station.  For seven innings, that was the story of this ballgame - pretty boring and pretty stressful for D-backs fans.  The D-backs "C lineup" - which featured a brilliant 1-2 lineup combo of Willie Bloomquist and Melvin Mora (which combined to put up a pathetic and predictable 0-5 night, with Melvin Mora's Jersey collecting a hit-by-pitch while batting for Mora in the fourth), Henry Blanco getting the start over Miguel Montero, and the team's best hitter all year long - Ryan Roberts - hitting eighth - failed to put a dent in Maholm.

Then the top of the eighth inning began, and Kirk Gibson decided that it was time to put the good D-back bats back into the line-up.  Kelly Johnson led off the inning with a walk while pinch-hitting for Duke, then Bloomquist sac'd KJ over to second, setting up Stephen Drew, who pinch-hit for Mora, to drive him in the first of his two RBI singles on the night.  Human bulls-eye Justin Upton followed Drew by getting plunked, putting another runner in scoring position with just one out in the inning, but Chris Young and Juan Miranda struck out to end the threat.

Thankfully, though, the game was all tied up, and we turned the game over to a bullpen that was largely steady for us tonight.  Aaron Heilman came on in the eighth and pitched a clean inning, with two exceptional diving plays behind him covering up a pair of pitches that were absolutely crushed.  After Arizona failed to take the lead off of Joel Hanrahan in the top of the ninth, Esmerling Vasquez pitched a scoreless bottom of the ninth to send the game into extra-innings, and the outlook for the game was much more optimistic than it was just two innings prior, when the D-backs were wallowing in their one-hit misery.

Arizona struck quickly in extra-innings, with KJ quickly reaching base yet again with a lead-off single to begin the tenth, and moving to second on a pinch-hit bunt from none other than Ian Kennedy.  Stephen Drew came to the plate again and promptly whacked yet another RBI single.  Just like that, the seven innings of futility from the C-lineup were completely covered up by two plate appearances apiece from Johnson and Drew off the bench, and Arizona had an extra-innings lead.  Drew advanced to second base on the throw to home plate, so the Pirates intentionally walked Upton before getting Young and Miranda on a fly-out and a ground-out, respectively, to end the inning.

Still, the D-backs were handing the ball off to Putz with a one-run lead, and hope was in the air that the D-backs could steal one in extra-innings.  After striking out Xavier Paul to begin the inning, Putz surrendered a ground-rule double to the baseball god that is known as Andrew McCutchen.  Unfortunately, Putz couldn't strand McCutchen there, as Neil Walker hit a single up the middle that scored McCutchen and tied the game up, blowing just his second save of the year.  Putz stopped the bleeding by striking out Garrett Jones and getting Dusty Brown to ground out, so on we went to the 11th inning.

The top of the 11th would prove to be disappointing for Arizona, as Xavier Nady led off the inning with a double, followed by a single from Blanco.  Unfortunately, Tatman provided an unproductive strikeout, then Kelly grounded into an inning-ending double play to keep the score tied going into the bottom of the inning.  Disappointing as that was, though, I'm not really all that frustrated about this half-inning.  Sure, Kelly gave us the worst possible outcome, but he can hardly be blamed for the loss given how vital he was in getting the D-backs into extra innings.

Joe Paterson began the bottom of the inning by striking out Lyle Overbay Bover, then was immediately pulled for Micah Owings.  Owings got Ronny Cedeno to pop out in foul territory, and after back-to-back singles from Brandon Wood and Jose Tabata, got Paul to fly out to end the threat and give us another inning of bonus baseball.  Gerardo Parra, who entered the game in the bottom of the twelfth as a defensive replacement, singled to lead off the inning.  After Drew struck out and Upton flied out to left field, CY came to the plate.  During CY's at-bat, Parra stole second base on a 2-0 ball, and with the count at 3-0 and a runner in scoring position, Pittsburgh elected to walk Young and deal with the pitcher's spot with Owings on deck.

Now.... HERE is where I get frustrated.  Rather than give Micah, a career .287/.317/.527 hitter, the chance to help his own cause and give us another inning of work on the mound if he didn't come through, Gibson thought a tie game in the twelfth inning was an excellent opportunity to turn to - no, rely on -  the dead weight at the end of the bench.  He sent up Sean Burroughs Naked Lunch and his .263/.263/.263 line to pinch-hit for Owings, ending Owings' night with just 2/3 of an inning pitched.  Predictably, Burroughs flied out and the inning ended with the game still tied.

Now, Owings may not have pulled through for Arizona, but as I mentioned above, even if he didn't pull through at the plate, I would have been confident in his ability to give us another quality inning of relief.  However, Burroughs was sent up to end Owings' night, and Arizona had just two arms left in the bullpen.  Saving David Hernandez for a potential save situation (a decision I only agree with because of his heavy workload this year), Gibson thus forced himself to turn to his bullpen equivalent of Burroughs, left-hander Zach Kroenke.  The first batter of the inning?  Right-handed-hitting baseball god Andrew McCutchen.  What happened next was almost too predictable.  Not wanting to walk McCutchen with his impressive speed and unable to throw something that would miss McCutchen's bat, Kroenke served up a middle-of-the-plate slider on a full count that McCutchen sent into the bleachers.  3-2, game over.

I'm not frustrated by the struggles of some of the everyday hitters in the lineup.  I'm not even frustrated by the struggles of the likes of Bloomquist and Mora - heck, they were pulled for more effective bats in key situations, an laudable move from Gibson.  What I'm frustrated by is the burden of dead weight at the end of this roster.  Say what you want about Burroughs' batting average in pinch hit situations over his last ten appearances or however many qualifiers it takes to make him look like a non-terrible player, the reality is that Burroughs is a terrible major league player.  And say what you want about Kroenke giving us a second left-hander in the 'pen, and a second arm in the 'pen who can be stretched out over multiple innings, but if those innings aren't even replacement-level-caliber, what good are they?  These players are Triple-A players, and they belong on our Triple-A roster.  Free Kam Mickolio, and Free Collin Cowgill.  Please... before my head explodes.

Just look at some of the WPAs Arizona had at multiple points of a game they managed to lose... 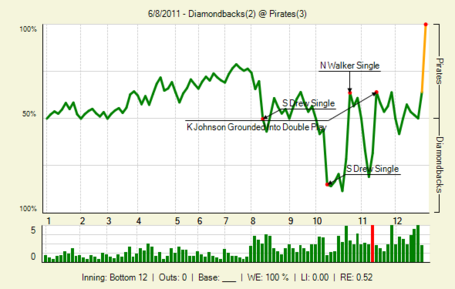 I'm ready for tomorrow's game.  Rookie sensation Josh Collmenter takes the mound, hoping to remain hot on the mound.  (That Collmenter, he's so hot right now.)  Let's salvage this one, please?  A few green comments tonight, but none of them made me less depressed.  So I'm going with a CotD from 'Skins that only got one rec, but spoke volumes about the umpiring greatness of C.B. Bucknor.

Drew just called Bucknor a "prick" from within the dugout.

That’s like anyone else on the roster waiting for him in the parking lot with a tire iron.