Fresh off a 2-2 split home series against the Nationals, the Diamondbacks came into Pittsburgh looking to stay competitive with the Giants for the division lead. After an offday of excitement featuring the first day of the MLB draft, (well...excitement for some, anyway) the Dbacks sent their #2 starter to the mound.

How did it go? Find out... above, obviously. Can't you read?

Oh? You want details? Fine. Click through the jump...

In what many posters called a flashback to 2010 in the Gameday Thread, David Hernandez came on in the 8th inning in this evening's game and turned Pirates fans' frowns upside down. Given a 2-run lead, Hernandez clearly didn't have anything tonight, yielding 5 runs without retiring a single batter. The implosion was so complete, so fast, and so unexpected that it was honestly somewhat tough to develop any sort of emotional reaction. After being Heilman'd by Hernandez, this one's still sinking in, folks...

It all started so well, too. After Ryan Roberts flied out to start the game, Kelly Johnson hit his 12th home run of the season to give the Dbacks a quick lead. Justin Upton drew a walk next up, but was caught stealing -- in fact, Upton has now been caught 5 times, to go with 11 steals on the season. Stephen Drew grounded out to end the threat, but it  was 1-0.

(A quick aside on Kevin Correia, the Pirates' starter today: Correia has had a lot of success this year, not only in generating the highest groundball rate of his career, but also the lowest line drive rate, too -- and most of those line drives have turned into fly balls. With fewer fly balls turning into home runs than his career average, one should have expected this regression. Indeed, between Correia's night and Hernandez's outing, this game could be called "The Two Regressions". But I digest)

Daniel Hudson got a 1-2-3 bottom of the 1st. In the 2nd, after Miguel Montero walked with one out, Juan Miranda, who was back in the lineup today, got a single for the first of his four hits on the day -- a career high, and Miggy went first to third on the play. However, Gerardo Parra was the victim of an unlucky play, lining out to second, and Miranda was doubled off to end it.

Miranda made an unfortunate error in the bottom of the inning to give the Pirates the lead, allowing Lyle Overbay to reach first and then second base, and sending Andrew McCutchen (who had walked) to third. Former Dback Chris Snyder hit a sac fly to score McCutchen, and Ronny Cedeño singled to drive in another run and give the home team the lead. After Hudson struck out Correia, both pitchers had a 1-2-3 3rd inning.

A Drew single and Snyder passed ball came to naught for the Dbacks in the 4th, but Snyder again cursed the team that traded him with another sac fly in the bottom, scoring McCutchen yet again, but that would be Hudson's only earned run of the game. In fact, many would say that it wasn't even that: McCutchen's run was certainly the subject of some consternation, as Parra obviously nailed McCutchen at the plate with a strike to Montero, yet the umpire called him safe. Cue confusion by all sides. Apparently, HP umpire Dan Iassogna claimed that the ball was bobbled within Miguel Montero's glove -- after the tag. No, seriously, let's try that again... the ball was "bobbled", within Miguel Montero's glove, AFTER THE TAG. Even the Pirates announcers found the call idiotic, and more than one poster thought Iassogna was crossing wires and confusing the NFL's catch rules with those of MLB. The call itself was "only" a 3.4% swing in win percentage, because the Pirates already had a 2-1 lead, but it was a clear-cut example of a single call directly leading to a run rather than an inning ending double-play.  Baseball purists everywhere, however, thanked God for the call and praised the beauty of the human element.

Juan Miranda got that run back leading off the next inning, for his 6th home run of the year and the 10th of his brief MLB career. Hudson helped his own cause by singling with one out, and a Roberts double and Kelly Johnson single scored two more runs to catch the Pirates and take the lead back, 4-3. Upton followed with another single, but then, like the 4th, a subsequent Drew fielder's choice and a ball in the dirt (this one ruled a wild pitch) didn't result in any more runs for Arizona.

Hudson pitched around a Cedeño double in the 5th, and Daniel Moskos pitched around another Miranda single in the 6th. Evan Meek similarly got around an Upton double in the 7th, but Hudson was lights-out from Cedeño's 5th inning leadoff double onward. From that point on, Huddy alternated like clockwork between groundball outs and strikeouts until the end of the 7th.

When Chris Young homered to lead off the top of the 8th, the Diamondbacks had a 5-3 lead. Juan Miranda whacked his fourth hit of the game, and Sean Burroughs singled for Hudson after 105 pitches, though the Dbacks didn't score again. Given what followed, it looked like a pretty bad decision by Alan Trammell to pull a rolling Hudson from the mound, especially with Hudson not exactly an awful hitting pitcher, hitting .226 after today's game. (Kirk Gibson was serving his one game suspension for Esmerling Vasquez's HBP in Sunday's game)

David Hernandez came on, and everything went to shit. Whatever "it" is, Hernandez clearly didn't have it tonight. The Pirates went double, double, single, bunt single, walk,  topped off with a bases-loaded double by former Dback Lyle Overbay. Hernandez wasn't helped out by Montero, who fielded Xavier Paul's sacrifice bunt and threw to second, where Josh Harrison was called safe. After failing to record an out, Hernandez was replaced by Esmerling Vasquez (who is appealing his 3 game suspension) and both the Pirates and Dbacks went down in order to end the game.

Miranda had his first career 4-hit game, including the solo homer, and, as Zavada's Moustache predicted in his series preview, Hudson certainly outdueled Kevin Correia:

Although we lost, at least Kevin Freaking Correia didn't add to his major league-leading 8 wins. (Wtf??) 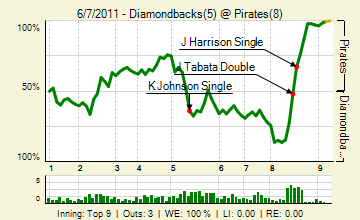 Top rec'd comment went to hotclaws for a pun, but I'm awarding Comment of the Night to kishi for this little gem:

The DBacks are 24-0 when leading after seven innings? I love you, bullpen…

The Dbacks will try to bounce back tomorrow with another early game, pitting former Pirates ace Zach Duke against Paul Maholm. Be there, or...at least follow the game online at the Snakepit.