Share All sharing options for: Diamondbacks 4, Nationals 9: So Near, And Yet, So Far...

Ian Kennedy pitched very well, despite struggling with his control early. However, the net result of a war of hit batters was the Nationals cranking a three-run homer in the eighth off Aaron Heilman to put the Nationals up 4-0. Kelly Johnson broke up the shutout with a solo homer in the bottom half of that inning, but it was the ninth which had all the hallmarks of a classic come-from-behind Diamondbacks victory. Arizona scored three times to tie it up, the last as Xavier Nady just legged his way out of a game-ending double-play and forced extras. But, with the help of a blown call at first base, the Nationals scored five in the 11th to deflate a raucous crowd at SnakePitTowersFest.

[People were too busy socializing to be concerned with such matters, so I'm taking over this recap] After a clean first, Ian Kennedy struggled his way through the second inning, putting a man on third with one out, and loading the bases with Nationals but stranding them there, managing to strike out the opposing pitcher while hitting him (he swung at the pitch). Ian had a man on third in the third inning, and there was no escape, a sacrifice fly bringing him home. Kennedy did not have his best control - he walked three and hit two in the fifth, which would prove significant - but got through seven innings, scattering five hits and allowing just the one earned run.

However, the Arizona offense was having even worse trouble with Jason Marquis. They had a chance in the opening frame, loading the bases, only for Miguel Montero to strike out looking, and we didn't get another runner past first-base through the first five innings. The sixth was where it got interesting: after a Willie Bloomquist K, Kelly Johnson walked and Marquis hit Justin Upton with a ball in the kidneys, dropping him like a sack of potatoes. It may have been in return for the two plunkings Kennedy had delivered in the top of the frame. However, it was the fourth time this series Upton had been hit by the Nationals.

The umpire immediately ejected Marquis, who pointed to the scoreboard as if to indicate he wouldn't be hitting anyone in a 1-0 game. While his manager also went with him, the Diamondbacks couldn't capitalize on the two-on, one out opportunity. The score remained 1-0 until the eighth. Esmerling Vasquez came in, allowed a lead-off double, and one out later, he too hit a batter: Vasquez, along with Kirk Gibson were immediately ejected. Aaron Heilman replaced Vasquez and the first batter launched the ball into the left-field bleachers - and took his time circling the bases, though it wasn't clear whether the boos were for that, or Heilman.

Now four down, Johnson got Arizona on the board immediately, with his 11th long-ball of the year. But if was the ninth that got really exciting, as the Diamondbacks clawed their way back. Singles by Stephen Drew and Chris Young were followed by a walk to Montero, loading the bases with no-one out. Juan Miranda coaxed a free pass, making it 4-2, and then Melvin Mora hit the ball to right-field, creating a one-run game with runners on the corners and one out. Xavier Nady hit a slow grounder up the middle, and just managed to get up the first-base line in time to beat the throw that would have completed the double-play, and bringing home the tying run.

Bonus baseball! However, it didn't go well for the D-backs. Both teams stranded a man in the tenth, but Joe Paterson walked two batters and hit another. He does have a legitimate complaint, as first-base umpire Gary Darling blew a call at first, calling the runner safe on an infield hit, when replays clearly showed he was out. Paterson couldn't get that fourth out, first walking a Nationals hitters with the bases loaded to give them back the lead, and then coughing up a grand-slam, to make the score 9-4 and effectively end the game. His ERA increased by over three runs with this one outing. 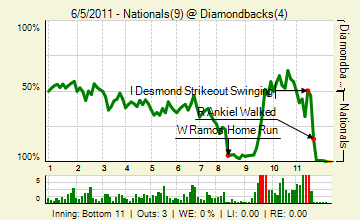 I propose that we at the SnakePit get him a giant cannon that will launch him into the sun.

SnakePitTowersFest was a blast, though it might be a while before I can look at a sausage again... Let's have a rollcall there: me, Mrs. SnakePit, soco, mrssoco, kishi, mrskishi, edbigghead, mrsbigghead, papabigghead, James, Turumbar, DbacksSkins, Jinnah, Clefo, BattleMoses, Seth, Mrs. Seth, the Sethlette, Leo and Amy. A lot of food, and a great deal of enthusiasm. Not least for the dispatch of the Baxter pinata, which I completely forgot to take a picture of - I'm sure someone will bail me out there. While not quite a sun-blasting cannon, here's its very enjoyable demise: