Last night's loss to the Nationals to open this weekend series dropped Arizona back to second place in the NL West. But the season is only a third over, and there's plenty of baseball still to be played, and teams have to have short memories and get right back on the winning trail.

Which is exactly what the Diamondbacks did tonight. With Jayson Werth out of the Nats' lineup, it pretty much assured that we wouldn't hit quite so many balls directly at him tonight. We also solved that problem by hitting them into the seats and high off the center field wall. More details of the Diamondbacks' 4th shutout this season after the jump.

Josh Collmenter - now nicknamed "The Gnome" by Gonzo (for his appearance in the 4th minute of this J.J. Putz interview) - was solid all night long in this his fifth start of the year. He sat the first six Nationals down in order, then in the 3rd inning gave up a double to Pudge Rodriguez after an epic 11-pitch at-bat. Pudge was stranded as the next three hitters flied out, struck out, and popped out. Collmenter only allowed hits in the 3rd, 4th, and 6th innings and gave up a walk in the 7th; nobody aside from Pudge reached second base all night long for the Nationals. He threw 103 pitches, 67 of them for strikes (65%), and had a good mixture of ground ball outs (6), fly ball outs (11) and strikeouts (5), matching his strikekout total from Sunday's start in Houston. Doesn't seem like all those hours watching video of Collmenter helped Washington's hitters see him any better during the game!

Meanwhile, Arizona took an early lead off of Nats' starter Yunesky Maya via a solo home run by Chris Young to lead off the 2nd inning. That's his 10th home run of the season, and it extended his NL-leeading extra base hits to 30. The Diamondbacks had a few chances in the 3rd and 4th innings. In the 3rd, Ryan Roberts singled but was caught stealing and behind him Kelly Johnson walked, but Justin Upton struck out. With two outs in the 4th, Miguel Montero doubled and Xavier Nady walked, but Gerardo Parra flew out to left.

But it was in the 5th when the Diamondbacks pulled away. Collmenter walked, and you know what they say about leadoff walks. Roberts doubled to left and Collmenter was stopped at 3rd to make it runners on 2nd and 3rd with nobody out. After Kelly Johnson struck out, Justin Upton was hit in the elbow to load the bases and set up the force at any base... coincidence? Justin didn't think so, and Maya was pulled after that HBP for former Diamondback Doug Slaten. Revenge is a dish best served by Stephen Drew being given an easy 3-0 count, getting the green light to swing, and then tripling high off the center field wall to score all three runners. Good to see Doug Slaten is still allowing inherited runners to score - that bases-clearing triple made it 15 for 30. Chris Young and Xavier Nady both struck out against Todd Coffey to strand Drew at 3rd base, but the Arizona had a 4-0 lead.

The Diamondbacks continued to waste opportunities and/or strand baserunners all night long against Washington's pitchers. Luckily, it didn't end up hurting them. Parra doubled to lead off the 6th but was thrown out at 3rd base. Only a perfect relay was going to get him, and Rick Ankiel showed off his arm in center field with his throw to the infield. In the 7th inning, Johnson walked and Upton was hit by another pitch in the left arm. That's the third time in the first two games against the gNats, and somebody on their team will get it before the weekend is up. But the Diamondbacks couldn't do a thing with two on and nobody out, thanks to strikeouts from Drew and Montero and an infield pop up from Chris Young. The Diamondbacks didn't leave any baserunners on in the 8th inning, but that's because they didn't get any. Henry Rodriguez struck out Parra and Nady; pinch hitter Sean Burroughs managed to make contact at least and flied out to center.

Since it wasn't a save situation, Joe Paterson was given the 9th inning, and he made quick work of Washington's 2-3-4 hitters with a groundout, pop out, and strike out to end the game and get the Arizona Diamondbacks back on the #winning train. Collmenter is now 4-1 and lowered his ERA to 1.25. That's how it's done, kid! 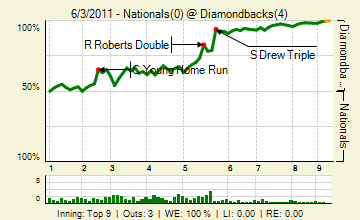 You know it's a good night when your worst WPA% player is still greater than -10%. Aside from leaving a team-combined 16 men on base tonight, it was a good night all around. Collmenter kept his pitch count down very well, his only inning above 20 pitches was the 3rd where Pudge ate up 11 of the 23 for himself. Hernandez and Patterson both threw clean frames. Tonight marked the fourth shutout by the Diamondbacks already this season; compare that with the three shutouts they had all of last year. They are definitely a better team! And Daron Sutton gave us an interesting stat after Drew's bases-clearing triple. The Diamondbacks under Kirk Gibson are the "hackiest" major league team during 3-0 counts - they've taken 14 swings in 3-0 counts and they are 5-for-6 (a single, two doubles, Drew's triple tonight, and a home run). At least when they're making contact, they're making good contact and it's paying off! (I think I understood that stat, is that right Daron?)

You might be wondering why there were so many randomly green comments in tonight's GDT. Well, blame soco and his very good impression of Daron Sutton:

Gah
I don't know if I've said it enough, but we need more recs.

Unfortunately, Matt Cain pitched well tonight and Brian Wilson held off a 9th-inning almost-rally by the Rockies to keep the Giants in 1st place. MEMO To: Rockies Re: comebacks - U R DOIN' IT WRONG.

It's a 5pm start tomorrow night, Joe Saunders vs old friend Livan Hernandez, so don't count on a quick game! It's also a Wailord recap, though he might be understandably tired after taking the SATs tomorrow morning! Good luck, smarty pants.