The Little League World Series at South Williamsport is a massive event. Crowds of up to 41,000 turn up to watch the games in person, and millions more follow the event through television on ESPN, with the young stars covered down to the finest detail ("Favorite food: hot dogs"). But if you were to casually glance at the official record-books for the 2001 LLWS, you'd see something odd. The Ronaldo Paulino All-Stars, representing the mid-Atlantic region, are shown as finishing last in Pool B, but still proceeding to the elimination round. Where they lost their first game 6-0. And still went on. Indeed, the team ended up losing the third-fourth game by the same score, 6-0.

Then you note the annotation: Forfeit: Mid-Atlantic used ineligible player. And it all comes back.

Baseball has a unique place in the landscape of the American psyche, one as much founded on mythology as reality. There's an idealistic image of the game, centered on Field of Dreams and Take Me Out to the Ballgame which, as we've seen, is often at odds with the grubby reality. Particularly dearly-held is the notion of Little League baseball being the Olympic ideal - it's not the winning, but the taking part - come to life. If you read Little League, Big Dreams, you'll be aware of the inaccuracy of that vision, with competition often the equal of anything you'll find in the majors. Nothing illustrated this better than the grubby saga of Danny Almonte, the Little Leaguer who wasn't.

The age of players from Central America and the Caribbean is sometimes as reliable and well-documented as an Enron expense account. The Dominican Republic is particularly notorious for this: Miguel Tejada was outed a couple of years ago by ESPN, who showed he had been taking two years off his age, ever since signing a Major League Baseball contract in 1993. We have even seen suggestions Albert Pujols is older than he claims, with Rob Neyer saying earlier this year, "There are still some reasonably intelligent people with reasonable doubts about Pujols’ age."

The purpose is obvious. A 20-year old who can throw 90 mph is a lot more valuable - and will get paid a lot better - than one that is actually aged 22 or 23. This can be achieved by falsifying documentation, such as birth certificates, or even adopting the identity of another, younger relative. The latter was the approach taken by former D-back Tony Peña, He took the name of his cousin, Adriano Rosario, making him appear to be 19 rather than 22. According to Scott Boras, Peña was told "that if he used the name it would help him get more money from a team. These are kids. They'll do anything the buscone [local agent in the DR] tells them to do because they control these kids' lives."

in Little League, there is no financial incentive, but the inclination to bend the rules of eligibility is still present. Danny Almonte was certainly not the first such case. Arguably far worse happened in 1992, when Zamboanga City from the Phillippines won the LLWS. However, on investigation, they were found to have a squad entirely filled with players either too old to take part, using the identities of other children, or shipped in from outside the area of eligible residence. They were stripped of the title, which was awarded to the team they beat in the final, Long Beach - whose roster included current Diamondback Reno Ace, Sean Burroughs.

However, I don't think this caused the same shock-waves. Partly, this was due to the era: the LLWS was a lot less covered in those days, back in the days before ESPN had nine channels and the Internet provided connectivity on a global scale. A certain amount of xenophobia perhaps also played a part. In 1975, the organizers had banned all overseas teams from the event, allegedly "because of questions of player eligibility." While the ban was lifted the following year, an unspoken reaction of, "That's what you expect from foreigners" seems to have continued. The 2001 scandal, however, showed shenanigans were not just something that happened elsewhere.

The Rolando Paulino All-Stars came from the Bronx in New York, playing their home games virtually in the shadow of Yankee Stadium. However, they were somewhat fortunate even to make the LLWS. In the Mid-Atlantic tournament, they only scraped out of pool play on a runs allowed tie-breaker, having lost two of their four matches. However, they then went on a roll, beating previously undefeated Easton 11-0, then State College American 2-0 in the title game, to take the division and move on to South Williamsport. Danny Almonte, allegedly aged twelve, pitched a no-hitter in that contest, striking out 16 opposing batters.

That was merely a warm-up. In his team's opening contest of their pool at the LLWS, Almonte faced the team from Apopka in Florida, and threw the first perfect game in the Little League World Series for 44 years. Throwing a mere 64 pitches, 53 of them strikes, he struck out the first fifteen batters he faced. The only two Apoka batters to put the ball in play came in the last inning, when they tried, and failed, to bunt their way on. After moving on the knockout, stages. he one-hit Oceanside of California in the semi-final, striking out another 16. His All-Stars won 1-0, albeit on a call muffed by an umpire, after a hitter failed to touch second-base when going first to third.

Little League rules means Almonte couldn't play in the US Final, a rematch against Apopka, and without him, the All-Stars went down, 8-2. "When their big kid isn't on the mound, it becomes a completely different ballgame," the Florida coach Ken Tapley said - a statement which acquires a certain resonant irony in hindsight. But they had their ace back for the 3rd-place game against Willemstad of Curacao, and won at a canter, 8-1. Paulino finished the tournament with 18 innings pitched, three hits and one unearned run allowed, 46 of the 72 outs he recorded coming by the K. Oh, and he hit .471 during the LLWS too.

However, the storm was preparing to break. 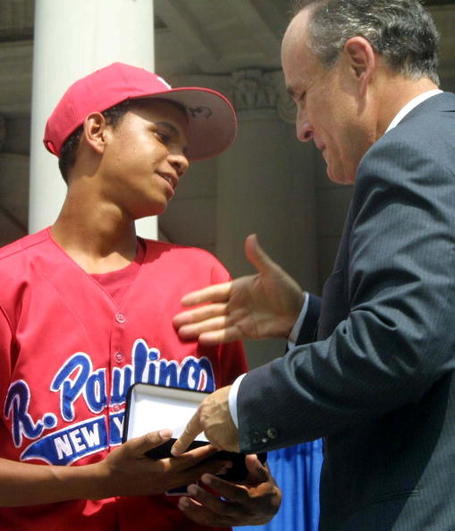 There had already been suspicions, with coaches and families of rival teams in their division spending $10,000 on private detectives to investigate the eligibility of players on the Ronnie Paulino All-Stars. While nothing substantial enough to merit action was found, Bob Laterza, manager of the South Shore National's All-Star team, who had been eliminated from the Little League playoffs by the Paulino side, remained vocal in his criticism:  "Those kids are not from the area, they're not 12, and they shouldn't be playing. Every team they beat is a victim of their shenanigans."

Paulino himself was a controversial figure. He coached a team in the Dominican Republic to the Latin American LL championship in 1987 and 1988, but official there revoked the latter crown on discovering the squad contained a number of overage players. Paulino was barred from Little League Baseball in the Latin American region, but this didn't apply in the US. And even there, in 2000 his league moved from New York’s District 22, their officials reportedly unhappy with the documentation requests made of them by its administration.

However, Little League did their best impression of a flock of ostriches, largely rejecting the complaints as nothing more than sour grapes. Spokesman Van Auken described them as "thinly veiled racism," adding that, "Any time a team has more than one year of success in a row, people make the assumption they're cheating when, in fact, all you have to do is look at the dedication of these kids." Bob Gerbasi, the district administrator in the Bronx in charge of the verification process, agreed. "I have some teams who didn't say a thing until they lost. These people are very narrow-minded."

Sports Illustrated are apparently also a bunch of racists, for they dug into the matter further, and discovered documents apparently showing that Almonte was born on April 7, 1987 - two years prior to the date claimed for him by his league. That would make him 14, rather than 12. While his mother insisted the 1989 certificate was the legitimate one, officials in the Dominican Republic carried out their own investigation and spoke to the witness who had signed that document. They "denied knowing the family or having signed the birth certificate," and the house of cards came down rapidly.

The problems with Almonte's eligibility and status didn't stop with his age. To be a member of a league's all-star team and take part in the playoffs, all player must have appeared in half or more of his team's games by June 15. But that was the date Almonte finished seventh grade in the DR. Bolivar de Luna Gomez, his school's vice principal, said, "We can't lie. He was here and the records show this. It is the truth, and if authorities ask us to turn the documents in, we are ready to do so." And the icing on the cake? Almonte and his father were in the US illegally, their tourist visas having expired.

Little League officials - yes, basically the same ones who dismissed parental concerns a few days previously - were suddenly shocked and appalled. Stephen D. Keener, president and CEO of Little League Baseball, responded: "Clearly, adults have used Danny Almonte and his teammates in a most contemptible and despicable way. We're clearly sad and angry that we were deceived. In fact, millions of Little Leaguers around the world were deceived." All the team's games were forfeited, with both Paulino and Almonte's father, Felipe de Jesus Almonte, being banned for life from any association with Little League baseball.

That was only the tip of official reaction. Dominican officials stated they planned to charge Felipe with falsifying documents, issuing a warrant for his arrest, and were considering similar charges against his mother. The New York Daily News also reported that Danny had not attended any school since moving to the US - the principal of his claimed location denied Almonte had enrolled there. As a result, the Administration for Children's Services began its own investigation. When asked what Danny had been doing for the last 18 months, his father said, "Eating...and he has been playing ball."

Perhaps the biggest victim of all was Danny Almonte, who by all accounts knew little or nothing of the deception perpetuated using him. "I feel now like I don't trust everybody like I did before," he said in 2004. "The people I trusted did me wrong. Out of the whole experience, the No. 1 thing [I learned] is to work hard every day." His father had by that time returned to the DR - I've not found out whether he was ever charged with anything - leaving Almonte in the care of his guardian, Paulino.

Danny led James Monroe High School to city championships in 2004 and 2006, then had a dubious, short-lived marriage to a woman in her thirties, and went to Western Oklahoma for two years. His second year, he hit .472 with 18 home runs, and went 9-0 as a pitcher, but was undrafted -  ironically, in part because, at 22, he was seen as old when compared to others in the draft at the junior college level. His coach there, Kurt Russell [no...not that one] said of Almonte, "We have a lot of good players that have went on and signed out of here, and he’s the best college player I’ve had. It’s a shame no organization has given him an opportunity."

No doubt, his history also played a part, no team being prepared to take a risk on the player who would forever be know as the boy who wouldn't grow up - a stigma which would undoubtedly remain with him for the rest of his life. Instead, Almonte returned to New York, and the last I heard, was working as an unpaid coach at James Monroe. The damage to the reputation of Little League was immeasurable, the illusion of orange slices and pizza parties forever shattered by the reality of adult lies and self-serving deceit in the name of victory.