Diamondbacks 1, Nationals 6: Duke Falters Early and Gets No Help

Share All sharing options for: Diamondbacks 1, Nationals 6: Duke Falters Early and Gets No Help

It was a beautiful night for a ballgame.  Temperature was 91 degrees, and a light breeze kept the park cool.  Unfortunately for those in attendance, the Diamondbacks didn't play nearly as beautifully.  A small crowd watched 9 innings of largely listless baseball, and silently trumped out with only a Subway coupon for a cookie as a reward.

Zach Duke, so good his first outing, struggled early and the offense never recovered.  He wasn't really that awful, and outside of the first inning you'd take 6 strikeouts and no walks.  Alas, that first inning, in which the Nationals scored three runs, was a killer for Duke and the Diamondbacks.

The first inning probably shouldn't have even been the back-breaker it ended up being, but some poor luck and well hit balls changed things irrevocably.  Duke struck out the first batter he faced, Roger Bernadina, and then gave up a double to Ian Desmond that floated just over Kelly Johnson's glove.  From my seat, just in front of the right field wall, the ball seemed to hit Johnson's glove, but he wasn't quite in position.  It would have been a fantastic play, and one he might say he normally makes, but tonight the luck wasn't there.  It fell to the earth and Desmond scurried to second.  He was brought home on a Michael Morse single.  After a Danny Espinosa single, Wilson Ramos doubled in both runners to bring the total damage to 3 runs.  The bleeding finally stopped with a Rick Ankiel strikeout.

The Diamondbacks didn't have any consistent hitting to counter what would prove to be a fatal inning.  They couldn't muster a hit until the third when Gerardo Parra led the inning with a double.  He was moved over to third with a Duke bunt, but he was out at third on a Ryan Roberts fielder's choice.  It was the second fielder's choice to kill a Diamondback scoring chance; the first came in the bottom of the first with a Kelly Johnson walk, who then became an out with Justin Upton ground ball.

Upton had an interesting game.  Four times he came to the plate, and four times he made it on base.  One was a fielder's choice,  two singles (one that didn't leave the infield), and a hit by pitch.  Yet he never left first base, which was symptomatic of the D'backs hitting.  They had runners on nearly inning, yet failed to move any over or score until the 7th when the game was nearly over.

For the Nationals part, they kept teeing off Duke and the gaggle of relievers that followed.  10 hits were credited to Duke alone, but both Micah Owings and Esmerling Vasquez took care of business and kept the game close.  The two pitchers added 4 more strikeouts over 2 innings, and didn't allow anyone to score.  They were a verifiable fire team.  Unfortunately for them, the Diamondbacks, and everyone watching, a serial arsonist was waiting to come in the 9th.

Aaron Heilman is likely a good man.  I'm sure he is a nice person, but he's just not someone you trust in any pitching situation.  He came in the top of the 9th with a 4-1 deficit, and left with the game in complete shambles.  He started by walking the replacement 3rd baseman, Brian Bixler, and then nearly walked Bernadina.  What he did instead was considerably worse, as he gave up a triple to extend the deficit to 5-1.  After finally getting an out off a Desmond grounder, he then hit Jayson Werth with a pitch.  Look, I don't like him either, but beaning him in a losing effort probably isn't the most productive use of your time, Aaron.  The bullpen was alerted by this point, but I think Gibson had given up this game to the great Baseball Spirits in the Sky.  Heilman let up an RBI single to Morse, before finally ending things with an Espinoza strikeout and a Wilson Ramos groundout.

Xavier Nady tried to make things seem interesting by hitting a one out double.  By this most of the sparse crowd had begun heading for the exits, so they weren't able to see the Diamondbacks fall well short of their latest comeback, and fall to second place in the NL West.

The Diamondbacks never looked that bad in the game, they just never seemed like all the pieces were clicking, either.  There were a few close plays at first, include a couple fielder's choices, that perhaps the Diamondbacks would turn normally.  Johnson probably makes that catch in the first inning on a good day.  The Diamondbacks would move over runners better, or get at least one home run (amazingly there was not a single home run from either team in the game) on a good day.  But today wasn't a good day.  It was just another of those games, one in a 162 where a team plays flat and just gets beat.  Luckily the series isn't over, and tomorrow's another day to come out and play better. 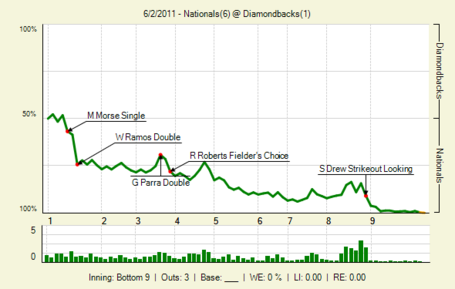 Comment of the Day goes to kishi, for accuracy:


I pretty much hate Jayson Werth. I hope the socos are giving him crap.Man

My wife was not joining in the light heckling, but I certainly gave him the business every time he played the ball.  I told him he sucks, that he looks like a caveman, he needs to shave, and when he almost airmailed a throw to first I told him "nice throw, dude."

Tomorrow is another day, one the features another game against the Nationals.  Hopefully the D'backs got the yips out and can come out swinging and take back the top spot in the NL West.  First pitch is scheduled for 6:40pm, so unless you're going to go see X-Men: We're Still Making These?, then I expect to see you either in the GDT or at the game.  Your choice.