Early and late struggles for the pitching doomed the D-backs, as two runs in the first and a homer off closer J.J. Putz in the ninth proved crucial. However, equally as damning was Arizona's failure to capitalize in the eighth, when the score was tied - a runner on third with no outs, was stranded there. Kelly Johnson had a hit and two walks, and Justin Upton reached safely twice, but the Diamondbacks lost their third in a row, to fall two games back of the idle San Francisco Giants.

After the first inning, the game was on course for a 27-18 Diamondbacks victory. The Indians had struck first, clubbing a two-run homer off Kennedy with one out in the first, to put Arizona behind early. However, the home team came back, and did so quickly, as the first four batters all reached base safely. Kelly Johnson walked, Stephen Drew tripled, Justin Upton blooped a single down the first-base line [I do wonder why he wasn;t on second?] and Chris Young doubled. Miguel Montero then brought Upton home with a ground-out, and although the next two outs quickly followed, the D-backs were back in front, 3-2.

Indians' starter Mitch Talbot had a reputation of settling down after the first - nine of the 24 runs allowed this year came in that opening inning - and so it proved, as Arizona were 0-for-15 with a walk against him after Young's double. xKelly Johnson got the free pass, while Gerardo Parra reached on an error, but was unluckily erased on a double-play hit and run when Kennedy lined right to the man covering second. While normally Talbot's surprisingly early departure after five innings and only 71 pitches would have been welcome, the middle-inning relievers sent out by Cleveland thereafter had ERAs coming into the game of 1.08, 1.97, 1.29 and 1.14.

Before we get to that, Kennedy had settled down almost as nicely after his shaky first. The fourth inning in particular was a thing of beauty, as he struck out Grady Sizemore, Carlos Santana and Travis Buck with the prettiest frame of work I can remember seeing all season. He got into trouble in the fifth, with men on the corners and no outs, but a sacrifice, strike-out look and fly ball ended the threat. However, Kennedy couldn't escape a similar two on, no out situation in the sixth. The Indians, who had two hits with runners in scoring position all series against the Giants, matched that total in one inning, and took the lead 4-3.

The sixth and seventh went about as well for Arizona as you'd expect, given the ERA numbers mentioned two paragraphs up. However pinch-hitter WIly Mo Pena got his first hit at Chase since playing for Washington in June 2008 to lead off the eighth inning. Johnson was sent up to bunt, but couldn't get it done, and was forced into survival more, in the hole 1-2. He fouled off a ton of pitches, working the count full, and on the eleventh pitch of the at-bat, crushed the ball into the right-center gap. Pena did his best impression of a rhino, scoring all the way from first, and the go-ahead run was at third with no outs.

Unfortunately, the Diamondbacks were unable to convert that situation. Drew had a long at-bat, and on his 10th pitch could only float the ball out to the shallow outfield. Young fouled off a 2-0 fastball that couldn't have been better placed, if had been set on a tee, and struck out. And Miguel Montero extended his 4-for-36 streak against left-handers, and also went down on strikes. In line with standard baseball philosophy, closer J.J. Putz came in to a tied game, only for a two-out homer off the bat of Orlando Cabrera to give the Indians the lead right back.

Ian Kennedy deserves credit for going eight innings - it only took him 103 pitches to do so, scattering eight hits, walking one and striking out eight. That said, I had a sinking feeling as soon as Daron Sutton mentioned how good Kennedy had been with runners in scoring position, holding them to a .115 average. That was utterly unsustainable, especially given the .134 BABIP associated with it, and so the sixth inning proved. There will probably be some more regression to come in his future.

The ninth inning started well enough for Arizona, Ryan Robert singling. However, all you need to know about the rest of the ninth are the names of the batters: Willie Bloomquist, Xavier Nady and Melvin Mora. Bloomquist did succeed in getting a sacrifice bunt down, before Nady and Mora both failed to get the runner in scoring position home. Bet you didn't see that coming, did you? 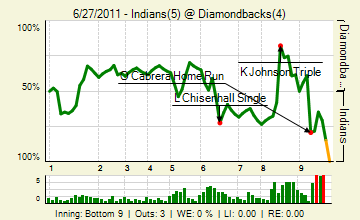 Comment of the night to AZDBACKR: unfortunate that she was talking about the first inning, rather than the eighth...

All the way home