Share All sharing options for: DiamondbacKs 0, Tigers 6: Collmenter mauled by Tigers in return home as Verlander shuts down Diamondbacks

Color me optimistic, but heading into today's game, I was fully expecting an awesome pitchers' duel. Collmenter's been money against any team he's facedfor the first time, and Verlander's pretty self-explanatory. Even if Detroit's offense chills in the upper echelon of American League offenses, dammit, I wanted to see a pitchers' duel. The Tigers didn't seem to waste any time cracking the enigma that is The Tomahawk, spoiling the Homer native's homecoming. Justin Verlander certainly lived up to his expectations, and with San Francisco's victory earlier today over Cleveland, we find ourselves looking up to the Giants in first place as a result. Hey, I guess we didn't get no-hit.

The game wasn't too much of a roller coaster for my heart, so I'll give it that. It seemed to be decided early on, even with the whole "Never Say Die-mondbacks" mantra that seems to be repeated when we find ourselves facing an uphill battle. The Tigers struck first in Collmenter's homecoming on an RBI double in the bottom half of the second, while Arizona looked to get it right back in the next inning. Wily Mo got on base due to an error on Brandon Inge, and Parra set us up nicely with a double to the right field fence. Pena was held up at third (which was the right call, mind you), so Ryan Roberts and Kelly Johnson were tasked with the onus of getting someone to cross the plate. Ryan Roberts was recently reminded, I presume, that he's actually Ryan Roberts (he's batting .211 since the San Francisco series, inclusive), and he went ahead and struck out. Y'see, folks, when you have a chance to score against Justin Verlander, you need to score against Justin Verlander. Kelly Johnson grounded out to end the inning and throw the goose egg up on the scoreboard.

Let's fast-forward to the fourth, the inning where the wheels sorta fell off. While Detroit probably thought it was nice to have a hometown kid (well, a fellow Michigander) trying to find his spot in the Majors, they got sick of it pretty quickly. They didn't need an entire game to adjust to the tomahawk style motion, just once through the order; this was pretty clearly evidenced in the fourth. Evidenced to the tune of single, single, double, homer to lead off, actually, which put us in a 5-0 hole which is dangerously close to insurmountable with an elite pitcher on the mound. While Josh did retire the next four batters, I believe it's safe to say that damage had been done. And then some.

After Detroit led the seventh off with back-to-back singles, Collmenter was given the hook, ending with a line of 6.0 IP, 10 hits, six runs (he exited five, but Esmerling Vasquez allowed an inherited runner to score) with two walk to his four strikeouts. Certainly not what you like to see, though his ERA still sits at a pretty 2.71 on the season. It'll still be interesting to watch him the rest of the way, though he certainly seems like he'd be great out of the bullpen if he ends up not sticking as a starter. Luckily, his success hasn't yet warranted a discussion like that, so I suppose I'll keep my mouth shut.

Arizona once again threatened in the eighth, and stop me if you've heard this before: Juan Miranda walked to start off the inning, and Parra once again proved Verlander to be mortal, doubling once again to put two runners in scoring position (this time with no outs!). Ryan Roberts... struck out. Kelly Johnson... struck out. Justin Upton came up, representing the final batter Verlander would have to face. While Upton worked the count to 2-0, it eventually reached 2-2. Guess what happened? I'll give you a hint: a dejected Upton walked back to the dugout, his team's score stuck at zero. It was also the last hope for the Diamondbacks, who struck out fourteen times on the night. Grr, strikeouts. I guess one highlight was in the eighth, when Alex Avila assumed he had an easy double to Parrazone in left field and was subsequently thrown out with about four feet to spare. Back to sadness, though, as the Diamondbacks went scoreless in the ninth, stranding Chris Young at third as Wily Mo Pena bounced his way to end the game. Grr, Jose Valverde. Grr, Detroit. Granted, when the pitcher you're facing for the first eight innings hits triple digits on the gun at nearly 120 pitches, it's hard to do too much. But, still. Grr. Second place... for now. 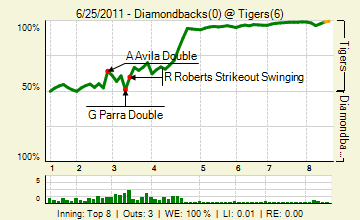 I have a chance to watch a remorseless robot attempt to destroy a ragtag band of humanity, or I can watch BSG.

Tomorrow's rubber match features Joe Saunders and Brad Penny - how's that for exciting? First pitch is 10:05 MST, so I'll be falling asleep around the start of that one. If we can take the series from Detroit, I can assume most of us will be very pleased. Let's get back into first, yeah?