Will the ninth time be the charm? Actually, I'd be more than happy if we finish the day on top of the West, as the Giants have just taken the lead against Cleveland, so it looks like the D-backs will have to win if they want to remain in first. And they are only facing one of the best starters in the American League this afternoon. How lucky is that? On the other hand, he's not the starter with the lowest ERA in this afternoon's contest. That would Josh Collmenter, whom we will be looking to continue his run of success against teams who haven't seen his tomahawk stylings. Cheered on by a large contingent from his nearby home-town of Homer, we'll see how he does... 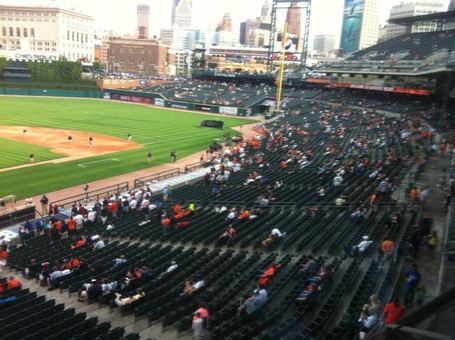 Nick Piecoro Tweeted, "There are tons of people in the stands here at Comerica wearing Homer, Mich.-colored (orange & black) Josh Collmenter T-shirts." Steve Gilbert took the above pic, adding, "The shirts have a #Dbacks logo on the front and Collmenter's name and number on the back." Hopefully, the welcoming atmosphere will help him shutdown the Tigers, and Arizona will be able to handle Verlander well enough. For it has just gone final in San Francisco, and we are back in a tie for first...