It's Homecoming Weekend at Comerica Park, as several former Detroit Tigers and Michigan natives get to visit with family and friends and entire hometowns. Oh yeah, and they also get to play, battle and win for their current team, the NL West-leading Arizona Diamondbacks.

Zach Duke had yet another rough outing and gave up six runs in only four innings of work, but a little help from the bullpen and Wily Mo Peña gave the Diamondbacks the win.

It was evident early on that Duke was going to need his usual 7.45 runs of support to get this team the victory. With two outs in the 1st inning, Duke allowed a walk, a single, another walk, and a double by Jhonny Peralta to give the Tigers a 2-0 lead. The Tigers made it 4-0 in the 4th inning on back-to-back doubles by Casper Wells and Magglio Ordoñez, and a single by Victor Martinez to score Orndoñez. Luckily, Peralta grounded into a double play and Alex Avila struck out, because that inning could've been a lot worse.

But in Arizona's half of the 4th inning, the Diamondbacks started to battle back against Detroit starter and fellow former Yankee Phil Coke. Arizona loaded the bases with a walk by Kelly Johnson, a reached-on-error by Justin Upton, and a single by Chris Young. Stephen Drew hit a sac fly to score Johnson, Xavier Nady singled in Upton and Wily Mo Peña singled in Young, and just like that, six batters and one out later and the Diamondbacks had made it a one-run ballgame.

Zach Duke couldn't give us a 1-2-3 inning when we needed it though, and in the 4th inning - again with two outs - Austin Jackson tripled and Casper Wells hit a home run to bring them both around and get two of those runs back for Detroit. The 4th inning would be Duke's last, and he was done after 83 pitches.

Then it was the Diamondbacks' turn to strike with two outs in an inning, the very next inning in fact. With two outs, Justin Upton singled and stole second, Chris Young walked, and Stephen Drew just barely beat out a slow grounder that Cabrera tossed to Phil Coke covering the bag. Tie goes to the runner, and that unravelled Coke. Xavier Nady singled home Upton and Young, Coke was done, and then Wily Mo Peña acquired an RBI (Drew) by not swinging at a pitch out of the zone that skittered on by the catcher Avila as a wild pitch. Drew's run was the sixth and tying run of the ballgame.

It was a game of bullpens from here on out, and Arizona's proved better than Detroit's. Bryan Shaw was up first and pitched two scoreless innings of relief (no thanks to some terrible miscommunication between Nady and Johnson and thanks to a great defensive catch by Upton), Esmerling Vasquez pitched a solid 7th including a double play, and David Hernandez's right arm pitched a dominating 8th inning.

In the top of the 8th inning, Wily Mo Peña decided to show fans what they were missing while he was in Reno and hit a blast to left field for a Diamondbacks lead. The initial estimate was 454ft and would be the longest home run hit by an opponent in Comerica Park, the third-longest ever. (Personally, I think that number's soft and hope we see something closer to 460-465 tomorrow from HitTracker.)

I know, small sample size, but here's some interesting numbers on why we might want to consider finding a place for Wily Mo...

Meanwhile, the Diamondbacks tried really hard to get some insurance runs in the 9th inning and the Tigers tried really hard to give some away with a single and two walks (and a beautiful bunt from Kelly). But Joaquin Benoit came in and got Chris Young to ground into your standard, failed-safety-squeeze 1-2-3 double play to end the inning and cause much hair-pulling and drink-throwing in the GDT. I know it's a close game and you're going for the element of surprise and Chris Young might be a good bunter, but he's also great at hitting sacrifice flies, isn't he? Well, maybe some stats might show why that was a smart play to try, but tonight, we're all just a little confused by that...

And now our hearts were beating a bit faster as J.J. Putz came in for the third day in a row. The Easy Button gave us a bit of a fright with a one-out walk and a double play ball that wasn't quite a DP, but Oroñez flew out to Justin Upton - who was so lazy he barely had to race to easily catch the last out of the game. It's save #21 for Putz and a one-run win for the Diamondbacks. 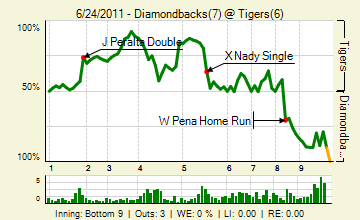 There were a lot of funny and deservedly green comments tonight, three with 4 recs and one with 5 and 6. I went with the one that made me laugh the most, from ZM after a horrible baserunning play by Bloomquist:

Don't be so mean to poor Willie,
He just forgot what it was like to be on-base. In his defense, it’s been a while.