Third Time's The Charm For the Diamondbacks Offense

Share All sharing options for: Third Time's The Charm For the Diamondbacks Offense

On Tuesday in Kansas City, Luke Hochevar mowed down the Diamondbacks during the early going, retiring us in order each of the first three innings. But after going 0-for-9 the first time through the order, Arizona did better the second time, going 3-for-9. And the third time through? 5-for-8 with a walk, chasing Hochevar from the game; he eventually took the loss, after allowing five runs in seven innings.

That's not an outlier. While all teams tend to do a bit better the more times they see a pitcher, for the Diamondbacks this season, the difference the third time has been enormous.

For comparison, here is the same table for the National League as a whole this season.

As you can see, there isn't too much difference the first couple of times through the order. The Diamondbacks are slightly better, though only by about ten points of OPS. I do note that their BABIP is particularly low the first time they see a pitcher, at .253 - their overall number is .292. If that's just luck, we would expect the number to rebound, and take the other offensive stats up with it. However, without having a break-down of balls in play, e.g. how many are line drives and how many infield pop-ups, we can't tell whether the BABIP number is legit.

I also note that there is a steady increase overall. Teams generally do better the second time through the order, and better still the third. [The fractional drop-off the fourth time is, I think, due to a bit of sample self-selection. To reach the fourth time through an order, a starter has to be pretty good, or at least, enjoying a pretty good day] This makes sense, as by that time, a hitter will probably have experienced, first-hand, all of a starter's arsenal, giving them a better chance of dealing with it. Walks increase, from 7.3% of PAs in the first time through, to 8.3% in the fourth, and K's head steeply the other way, from 20.2% to 16.0% by the third, and only 12.8% by the fourth.

For the Diamondbacks, the trend is almost the reverse. We don't have enough 4th time through PAs (less than forty), but for the first three times in the order, the walk rates are 8.4%, 8.0% and 6.5% respectively. The K rate is 19.2%, 20.3% and 17.4%. But the team still crushes the ball the third time through, hitting almost .300, with an OPS that is 157 points better than the last time they saw the same starter. BABIP leaps up to .334: again, I can't be sure if this is luck, or indicates that the team is squaring up pitchers, and hitting more line-drives (which tend to result in a higher BABIP).

Let's break it down further, by individual Diamondbacks, and see who is responsible for the improvement. Below are the numbers for all the regulars, the first and third times through the order. Note that we are definitely getting to an area where small sample size is a consideration, and the numbers below are certainly liable to random fluctuation as much as anything.

There are some striking numbers here, even given small sample size disclaimers. Justin Upton doesn't care: first or third time, his BA is identical, and his OPS within three points. But contrast Chris Young, who struggles really badly the first time he sees a pitcher, then completely tees off on them the third time. Juan Miranda and Melvin Mora also increase their OPS by over 400 points in their third PA. Shoe speculates: "My guess is our guys as a group are a little slow to pick up off-speed stuff, but after they have seen a guy twice, they finally recognize it and can lay off and pick a fastball. They all can hit a fastball like nobody's business."

Is it the effect of having Don Bayor as hitting coach, helping our hitters to make in-game adjustments? There's some evidence that may be so. He was hitting coach for the Rockies in 2009 and 2010, and in his opening year there, the difference in OPS between the 1st and 3rd time was 200 OPS points, double the league average (100) and right in line with the 196 points managed by Arizona this year to date. However, against that, the same number in 2010 for Colorado was only 50 OPS points, close to the NL average that season (69 points), so there does not seem to be a consistent 'Baylor effect' of late.

Regardless of cause, the effect on the Diamondbacks offense is obvious. First time around, we average one run every 10.3 PAs (NL average: 9.8). The second time, it's one every 8.0 PA's (9.0 average), and by the third, that has dropped to just 6.2 PA's per run (8.3 average). We can also look at offensive output from a per-inning perspective too, and see a similar surge in the second half, That, however, is somewhat muddied because of the indistinct correlation between times through order and inning. As we saw on Tuesday, the second time through can start as late as the fourth inning - or, if you are Madison Bumgarner, with one out in the top of the first. 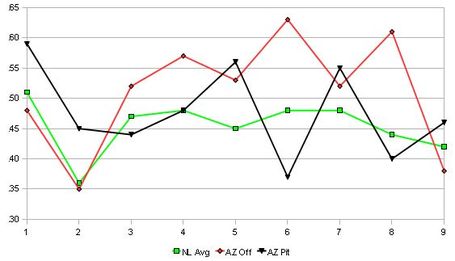 The green line is overall NL offense this season, and I was surprised how consistent run-scoring is. It hover between .45 and .50 runs per inning almost the entire time, though declines late in games, as hitters have to face set-up men and closers. The only dip is the second inning, which I couldn't work out for a bit - then, I realized that the second is the only time when you are highly likely to be sending up the bottom of the order, including the pitcher's spot in the NL, The AL numbers, with no pitcher's spot, show a similar but smaller dip: the second inning is at .43, with the other innings from the 2nd-8th all between .47 and .51, before reaching the "closers' cliff" in the ninth.

The red line is the Diamondbacks' offense, and the black one their pitching, and a few things stand out there. The first inning struggles, where Joe Saunders has allowed 16 runs and Daniel Hudson 13, are well-known. But the fifith inning is almost as bad, and the seventh not far behind - those frames, however, see the runs spread over a greater number.of pitchers. It's very clear where the team is doing best, with the gap between runs allowed and runs scored the biggest: the sixth and eighth innings, where Arizona has outscored the opposition by 19 and 16 runs respectively.

That's part of what causes the sense of this team being better late. Not only are those two frames the most productive offensively, they are close to the best from a defensive perspective, with only the second conceding runs at a lower rate. In the sixth, the D-backs have held opponents to a line of .228/.275/.367, a .641 OPS., mostly due to sterling work from Daniel Hudson, Ian Kennedy and, particularly, Josh Collmenter who is 3-for-27 with no walks in the sixth. The 8th is even deadlier: .202/.290/.277, a .567 OPS. David Hernandez and his .202 BA against is the obvious lynch-pin there, but he has been helped by Kennedy (3-for-26) and Juan Gutierrez (3-for-22).

Is this late success sustainable? That's a good question. Some of the BABIPs on the offensive side do seem likely to regress, with the team value of .334 the third time though the rotation on the high side. But equally, the early value may well increase. I don't think, in the final analysis, that it matters too much when you score the runs, as long as they are being scored. And with only the Cardinals and Reds having scored more than the Diamondbacks thus far in 2011, I don't think we can complain too much in that department.

[All stats through end of day Wednesday. Thanks to Scott and Jack for their input on this article.]