The Diamondbacks jumped on the Royals in the first inning for a lead, and never looked back.  Arizona completed the sweep, stayed on top of the division by .5 a game, and roll into Detroit looking pretty decent.  Overall, the game felt like a classic "getaway game."  It was decided early, and it seemed the teams were largely going through the motions, especially towards the end of the game, with the hope of escaping early to go in their respective directions.

If you just looked at the box score, you might think the roles were reversed, that it had been Felipe Paulino who led his team to victory while Hudson struggled.  The Diamondbacks batters came out hot, though, and the Royals only kept it close due to some unfortunate defensive blunders by the visitors.

Ryan Roberts started the game off with the first of his two singles for the night, and he was joined by Justin Upton after the latter was hit by a 96 mph fastball.  Apparently the Royals broadcasters were griping a bit about Upton not trying to get out of the way, but from my vantage point it seemed he barely had time to twist before the ball made contact.  He was awarded a base either way, and he and Roberts were moved over by Stephen Drew's groundout.  With two outs it seemed the Diamondbacks were in danger of stranding two runners in scoring position, but Chris Young wasn't having any of that.  He cooly singled to left, getting the Diamondbacks on the board for 2 runs.  He unfortunately was thrown out while trying to advance to second, ending the inning and the possibility of a truly crooked number.

The Diamondbacks scored in each of the first four innings, and in fact the final score was decided after four innings.  Miguel Montero led off the second with a solo home run just beyond the waiting glove of Jeff "Frenchy" Francoeur.  In the third inning Roberts again led off with a single, and Kelly Johnson singled as well to put two on with no outs.  They moved to scoring positions on a Paulino wild pitch, and Stephen Drew drove them both home with a double.  The final Diamondbacks run was off a solo Juan Miranda home run in the fourth, as he attempted to thwart Paul Goldschmidt's inevitable call-up.

The Royals, for their part, answered in the second and fourth innings.  They were given a boost by a poor defensive play by Montero and Miranda.  It's unclear if it was Miggy taking things in his own hands, or a designed play, but he attempted to pick off Mike Moustakas at first and put the throw too far on the inside.  Juan Miranda couldn't complete the play, and it allowed Alex Gordon to score from third.  Moustakas was then brought in by Alcindes Escobar to give the Royals their second run.

In the fourth Frenchy led things off with a double.  Matt Treanor hit a one out single, and Frenchy crossed the plate to put the score at 5-3.  Like mentioned above, the score would hold, and the Diamondbacks offense largely disappeared after this point.  Whether it was because they were content with the lead, or were already thinking of Detroit, they looked largely flat the rest of the game.

Paulino, despite giving up 5 runs, looked fairly sharp.  He struck out 8 with only 1 walk over 8 innings, but he also gave up 9 hits that included 2 home runs.  He only got 4 groundouts, but did get 3 double plays (one from center fielder Melky Cabrera).

Daniel Hudson, in contrast, did not have overpowering stuff, but was more than enough with only 1 strikeout and 1 walk over 7 innings.  Fun fact time: Aaron Heilman in one inning of work had as many strikeouts as Hudson did over 7.  Hudson did get 9 groundouts, though, including 2 double plays (one was an 8-6 double up).

Aaron Heilman was effective in his one inning of work, dealing 16 strikes to 8 balls to get a pop out, groundout, and strikeout.  JJ Putz was even more efficient, using 10 strikes and 8 balls to get two fly outs and one strikeout to close out the game for his 20th save of the season.  It puts him tied for 3rd in the league for saves. 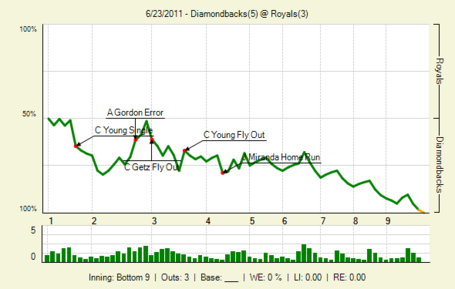 A fairly scattered Gameday Thread; even though we breached 800 comments, I think our collective commentary was as focused as the Diamondbacks by the end of the game.  Extensive conversations about cheese, the blameability of Steve, and what constitutes fast casual (as opposed to fast food) took center stage.  Brain J Boltik was the only one to be in the Century Club, but he was joined by 28 lovely folks: soco, Rockkstarr12, asteroid, 4 Corners Fan, dbacks25, GuruB, Jim McLennan, Clefo, hotclaws, snakecharmer, NASCARbernet, kishi, xmet, iheartdbacks, piratedan7, mrssoco, dback4life, Zavada's Moustache, Brian MacKinney, SongBird, DbacksSkins, blue bulldog, rfffr, emilylovesthedbacks, Muu, Sabean's_Folly, diamondfacts, and porty99.

And then I got distracted for 5 minutes while looking up the Anne Hathaway as Mary Poppins sketch from SNL a few years ago.  Ahem.

After that lovely sweep the Diamondbacks are being exported to Motor City to take on the Detroit Tigers.  In the pregame Todd Walsh will have a segment with Josh Collmenter where they visit his hometown, so that should be either interesting or maddening, depending on which drugs the nurse slipped you.  First pitch is at 4:05pm Arizona time, with Collmenter facing off against some dude named Justin Verlander.  See you here.