The Arizona Diamondbacks took the win tonight in their first game in an AL ballpark in the 2011 season, beating Frenchy and the Kansas City Royals 7-2. Joe Saunders, free from the confines of having to hit for himself, pitched another effective outing, going 7 innings and yielding just 2 runs. Recently-promoted Wily Mo Peña put the "hit" back in "designated hitter" and blasted his first MLB hit since 2008. Peña sent the first pitch of his second plate appearance back in the big leagues into the cheap seats to left center at Kauffman Stadium. Pending the outcome of the Giants-Twins game, the Dbacks are back in first place in the NL West. Details after the jump.

(Update: With the Giants' loss, the Diamondbacks take sole possession of 1st by a half game)

First of all, take another look at that bold line above. That's right. It's the summer Solstice, and the 2011 Diamondbacks are already 11 games up on last season. The team tonight also became the first squad in the division to win 40 games, doing it after 74 contests. I honestly think we'd be fairly satisfied to claim victory in 40 more over the course of the next 88 games, but it'd certainly be great to keep up our current pace and win 48 more.

The Royals had their Opening Day starter on the mound in Luke Hochevar, he of the 4.87 ERA, and he was perfect through the front 3. Indeed, his only blemish after the first 15 hitters was a fat and lazy double whacked by *ahem* NL Player Of The Week Justin Upton. Alex Gordon of the Royals had homered to lead off the bottom of the 1st, and with the Royals up 1-0, it looked like it might be a long game, especially for an offense that had averaged just 3 runs per game over its last 6, all of which coming at hitter-friendly home park Chase Field. The Royals' win expectancy peaked at 72.4%, but with 2 outs in the top of the 5th, Wily Mo Peña, the man who might be one of the biggest Dbacks in franchise history, launched a bomb to tie it. It seemed to slap some sense into the offense, as Juan Miranda immediately followed with a single of his own.

Wily Mo must've reminded the hitters that the last time they saw Hochevar, they scored 3 runs in the 1st inning. In the 6th, Ryan Roberts walked, Kelly Johnson reached on a swinging bunt, and Upton doubled again. After Stephen Drew struck out and Upton went to 3rd on a pitch in the dirt, Chris Young nearly made it 4-1 on a deep flyout. In the 7th, Miguel Montero singled, Wily Mo struck out, and Miranda doubled. After Gerardo Parra slapped a standup triple, Roberts put the ball in play on a weak checked-swing grounder that turned into an RBI when Parra alertly flew home.

The Dbacks wouldn't need anymore runs, but after Saunders walked Alcides Escobar and gave up an RBI triple to Gordon, just for good measure, Drew drew a walk just in front of a CY homer that capped the scoring at 7-2. David Hernandez and Aaron Heilman each pitched scoreless frames to finish it.

After a rough start to the season, Joe Saunders now has a 3.33 ERA in June, and that includes giving up 5 earned runs to the Marlins. If the Dbacks fade out of contention later in the season, (or even if they don't, perhaps) Saunders is making himself a valuable trade piece once again. Also, Justin Upton OWNS Luke Hochevar. In their careers, the 2005 #1 overall draft pick has hit the 2006 #1 overall draft pick to the tune of 4-6, with all 4 hits being doubles. It's only 6 plate appearances, but if you're keeping track at home, that's a 2.000 OPS. Wily Mo Peña went 1-4 with his blast, albeit with 2 strikeouts on pitches out of the zone. Still, the last time he played in the majors, he hit only 2 homers in 206 plate appearances for the Nationals in 2008. After only 1.9% of the plate appearances, he's already 50% of the way there.

A word on the usage of David Hernandez. There's really only one explanation: 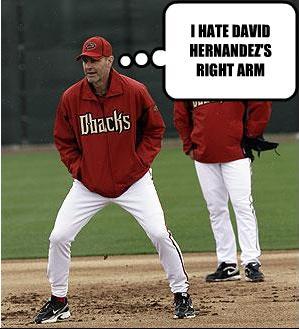 Kirk Gibson started warming up Hernandez during the bottom of the 7th, when it was 5-2, but the Dbacks scored 2 runs in the top of the 8th to make it a 5 run game. I suppose Hernandez was already warmed up, so he'd have to ice his arm anyway, but it seems odd to still pitch him with a margin that large. Although he's just outside the top 30 for reliever IP in the majors, Hernandez is now on pace to throw 74.1 innings this season. While it's awesome to have a reliever with a 147 ERA+, only 5 relievers in franchise history have thrown that many innings (entirely in relief). Of those 5 relievers, 4 of them saw their ERA+ drop the next season, some precipitously. More recently, the last four relievers to throw 70+ innings for the Dbacks entirely in relief -- Brandon Lyon in 2007, Chad Qualls in 2008, Juan Gutierrez in 2009 and Aaron Heilman in 2010 -- have ALL seen their ERA+ drop the next season. Some of this is undoubtedly noise, as Qualls had a devastating injury and Heilman tried to become a starter, but it's still something to watch.

The FanGraph tonight tells a simple story, and it resembles the trajectory of the Royals' season thus far: 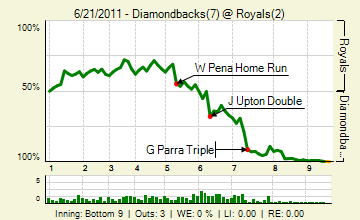 8 green comments in the 1000+ comment GDT, and the top rec'd one was an image posted by soco, but I'm giving Comment Of The Night to this one:

I’m watching the Twins kill the Giants 8-0 in the 1st inning. It’s the feel good comedy of the summer!

And at the time of this writing, the Twins did, indeed, hang on to beat the Giants 9-2, so the Dbacks are once again alone atop the NL West by a half game. WHOOPEE!!! It's good to be the kings...