"You can't tell the players without a scorecard!"

It's the traditional call of the scorecard salesman, as he looks to make a few bucks selling programs.  He gets passed by more than he sells, but there he is, or someone like him, trying to sell bound stacks of paper.  Most of what he sells is junk; like many paper reference materials, the Internet has created a better, more accessible product.  Want to know all the relevant stats or facts of a particular player?  It's only a click away, and even more available with the rise of smartphones and tablets.

The most important feature of a program isn't the stats or the goofy little articles.  No, the best part of a program is the scorecard at the end.  It's a remarkably simple layout that records all the relevant information of the game.

Of course, technology has largely replaced for most what a scorecard or newspaper's boxscore could do.  Websites detail all the boxscores and states going back a hundred seasons, allowing someone to look up nearly any moment in Major League's modern history.

So then why keep score?

For me, it's a fun way to keep my mind on the game, and allows me to see patterns within a game that might not have been particularly evident before.  Being a visual person, it's easier for me to look at the pretty symbols and see that a particular block of hitters is doing well (or poorly), or see if a pitcher is getting behind or ahead often, or all kinds of other things.

It's also a nice way to keep track of the games you've attended.  It's frustrating to try to remember a game from even just a few years ago and not remember much.  I remember going to the fastest game ever at Chase Field (Brandon Webb against the Nationals in 2008) but I couldn't tell you the score, or much of what happened beyond one little piece of trivia.

Not that it matters much the inane details of a baseball game from 2008 (or one from 2006, when I first went to a game at the BOB Chase), but it's nice to talk about it in greater detail than "well, it was against the Mets and we lost pretty badly."

Another great thing about keeping score is that you can truly make it your own.  Don't want to record every pitch?  Then don't!  I'm going to go over some basics, but really it's about making it your own.

The numbers above correspond to the different positions.  Pitchers are first (since that's where the play originates), and the right fielder is last.  But why is the short stop 6th, when everything else seems to go in order?  It hints at the origins of the position.  Originally the shortstop was a position between infield and outfield.  Remembering the correct infielder order is probably the biggest quirk for most new scorers.

After that it's just knowing the right symbols:

Ground outs are almost always just the sequence of numbers needed to get a guy out.  So a ball fielded by the third baseman and thrown to first to get the out is written "5-3."  A double play from third, to short (covering second), to first is "DP 5-6-3."  A flyout to center is "F8." 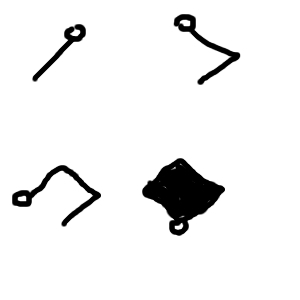 So the above is my crude Paint drawing of how I record the offense.  From the top left going clockwise: single, double, home run, triple.  Each base the batter/runner stops at is marked with a circle.  If the player makes a base with something special (like a walk or a stolen base), then I'll mark next to the base BB or S.

Coloring in the diamond when a run is scored (not just home runs) is important as that lets you easily see not only how much has been scored, but when.

You can make it your own.  Various websites prescribe different methods (some use a convoluted number/symbol system that makes no sense to me), or you could pick up Paul Dickson's Joy of Keeping Score.  There are as many ways to score a game as there are scorers, so the key is finding a system that works for you.  And that system might not be one at all.  There's probably a variety of pop-psychological things I could attach to the general decline of scoring (or why it often seems to remain in the domain of the older set) but it really doesn't matter.

Scoring is a fun activity that enhances a baseball game, but it's by no means necessary.  It's not the sole mark of an intelligent fan.  Keeping score is just something fun to do.  And when you add fun to fun, what do you get?  More...fun?