Yesterday's game was a bit of a disappointment, I think we can all admit. Despite how well the team has been playing, we're Diamondbacks fans. There is always a voice in the back of our head, whispering "all wins are fleeting." So when we see the team struggle, especially with our ace on the mound, we fight back the feeling of panic, the worries that this might be the beginning of another collapse. We say, "It's just one loss," but in our darkest moments, we wonder.

And so, we entered today's game, looking for Daniel Hudson to help us out, bring the team back to their winning ways, and win the series against the Marlins. As in so many tales, we got what we wanted. Though it wasn't necessarily in the way that we might have expected.

The first inning went quickly for both sides, with both sides going down 1-2-3. Our darkest concerns started to rise in the second, though, as Hudson started to struggle a little against the Marlins offense. A one out double by Greg Dobbs was followed up by a home run hammered to center field by Mike Stanton. Yeah, remember that name, guys, he'll show up again. Emilio Bonifacio bounced a ground rule double into the stands and was brought in by two-out single from Javier Vazquez, and the DBacks were down 3-0 after just an inning and a half.

The third inning didn't go much better, either. Logan Morrison started the inning with a leadoff double. Hudson tried to work out of trouble, putting up two outs and working Mike Stanton to a 2-2 count. Stanton hit a foul ball to the right side, but got lucky when Hudson and Juan Miranda collided going for the ball. It didn't look like either of them had called for it, and the Diamondbacks paid for it as Stanton crushed the next pitch, hitting an RBI triple to score Morrison easily.

Meanwhile, the Marlins were dominating on the mound. Stephen Drew had a single to start the second inning, but he tried to stretch that into a double and was out at second. The next time the DBacks got a runner on? Stephen Drew, leading off the fifth inning with a single, and he was stranded there. The Arizona offense was not getting it done early on.

The only saving grace was that Hudson managed to reign in his play and keep the game within reach. After giving up seven hits in the first three innings, five of them for extra base hits, he held the Marlins hitless for the next two innings. It wasn't until the sixth inning when he gave up another hit- again, Mike Stanton, but though Stanton made it to third, Hudson kept the Marlins from adding on any runs.

This was pretty fortunate, because the sixth inning was when the Diamondbacks offense showed up. A single from Parra was wasted by a back sacrifice bunt from Hudson, but Ryan Roberts wasn't about to let the Marlins wear out his pitcher on the basepaths. Instead, he took a 2-2 curveball from Vazquez and turned it into his eighth home run of the season. That beats his previous season high, not too shabby for the Dread Pirate. With Roberts showing that Vazquez was mortal, Kelly Johnson followed his fine example and followed it up with a triple. A ground out by Justin Upton brought in Johnson, and we had a game, cutting the Marlins lead to 4-3.

We looked to Hudson to follow up his teammate's with a shutdown inning in the seventh, but he quickly gave up a leadoff single to Chris Coghlan, dashing those hopes. Oh, wait, no- Miguel Montero made a great throw and Stephen Drew made an even better tag to catch Coghlan stealing, and the Marlins went down quietly.

The bottom of the seventh was more than a little bizarre. A leadoff double from Chris Young put the tying run in scoring position and ended Vazquez's night. Miguel Montero made what was roughly a token effort to avoid a HBP, but that was enough for the umpire, so we had two on and nobody out. The DBacks had Juan Miranda put down a sacrifice bunt (huh?) and then put in Willie Bloomquist to pinch hit for Gerardo Parra (what?). The Marlins decided to intentionally walk Bloomquist (excuse me?) and then we put in Xavier Nady to pinch hit for Daniel Hudson. Nady hit a bouncing grounder to third, looking like a possible inning ending double play, but for the inattentive defense of Gregg Dobbs. Dobbs bobbled the ball, all the runners reached, and we were tied up. After Nady's undeserved RBI, Ryan Roberts hit into an equally undeserved double play, so we were tied up at 4 after seven innings.

So we go to the bullpens.

David Hernandez was the first man out of the bullpen for the Diamondbacks. The mere words "struck out swinging" don't quite do Hernandez's pitches justice, because he had the batters looking foolish out there, and K'd the side. With two outs in the bottom of the inning, Stephen Drew gave us a single, and took second on a botched pick-off throw. Chris Young hit a double to score his shortstop, and we were going into the ninth inning up 5-4. Bring on the Easy Button.

Ahem, well, the Easy Button seemed a little stuck to start with. J.J. Putz got his first blown save as a Diamondback, giving up a leadoff solo home run to John Buck to tie it up. Hey, at least it wasn't Mike Stanton this time. Putz recovered well enough, getting two ground outs and a swinging strike out on his next three batters, but he headed back into the dugout with his first BS on the year.

He wasn't alone in that dugout, though- watching the show, you could see a couple of the players talking to him in the middle of the inning, and according to the postgame show they told him they were going to pick him up. And they certainly did. The ninth started with Willie Bloomquist getting a single. Sean Burroughs struck out, and then Ryan Roberts grounded out to third. In what could either be called a gutsy or foolish move, Willie Bloomquist went from first to third on the groundout, barely sneaking in beneath the tag. A walk to Kelly Johnson brought Justin Upton up with two outs and the winning run on third, and he shattered his bat on a Texas leaguer that dropped in between three players in right field. Bloomquist scored easily, the Diamondbacks had a walkoff win, and Justin Upton scampered madly around the field to avoid the celebratory assaults of his teammates. 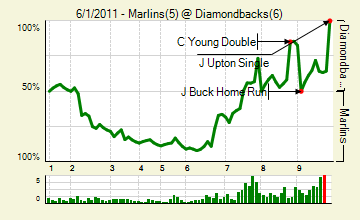 THERE IS NO SINGLE HARROWING EXPERIENCE THAN BEING A GIANTS FAN, EVER…. WHAT? WHAT THE HELL IS A "SUDAN"?

Also, thanks to Backin'the'Backs for the comment that I stole this title from.

So, remember a while back, when we were talking about how we'd hit the stretch of baseball where the Diamondbacks hit a nose-dive last year? We've torn through that stretch. Just shredded it. As MLB Network said, "The Diamondbacks are living large." Meanwhile, in St. Louis, the Giants have taken a lead in extra innings, so I suspect we won't gain any ground, but we won't lose any, either. But, in the end, we're in first. And that's what matters.