Zephon is having computer problems, so I'm throwing up the recap. It'll be short and to the point, since I'm sure this isn't exactly a game anyone wants to relive in great detail. The Diamondbacks offense continued to struggle on the homestand, letting waiver wire Sox acquisition Phil Humber take a shutout into the eighth. While Josh Collmenter didn't pitch badly - three runs over seven innings is solid enough - any hopes of a comeback were extinguished as the bullpen imploded for a five-run White Sox eighth, to put the game out of reach.

Oh, well: at least the Giants, Rockies and Padres all lost...

Through the front six innings, however, this was a very good pitcher's duel. Collmenter went through the Chicago line-up like a knife through butter the first time around, retiring all nine batters faced through three. Humber was almost as good, with just a two-out double to Justin Upton in the first separating him from perfection to that point. The visitors struck first, breaking the deadlock in the fourth, on a pair of singles and a groundout. Collmenter came right back, retiring the next nine in a row after the run scored, but flagged in the seventh, allowing a pair of homers, including one to Paul Konerko, who almost signed with us this winter.

Those 19 HR and 56 RBI would certainly have helped our production at 1B this year, which has regressed to being a black hole, after a brief burst of success from Juan Miranda. Miranda was 0-for-3 today, meaning he has gone 1-for-23 since his four-hit game in Pittsburgh. Overall this year, the 1B position for the Diamondbacks has hit .249 with seven HR and 34 RBI - only the Pirates, Dodgers and Astros have fewer long-balls at the spot. If the newly-promoted Wily Mo Pena can hit anything like he did in Reno, then he might find himself with significant playing time even after the DH is no longer needed.

It wasn't all doom and gloom for the offense, however. Gerardo Parra did pick up a couple of hits, but it was Justin Upton who once again led the way, with yet another three-hit game. That was his fourth such in the past week, during which time he has gone 16-for-29. That has brought his average up over .300, and he seems to be seeing the ball really well right now, with even his outs loud ones. While he may not make it into the All-Star Game by popular vote, he is certainly making a strong push for consideration as an additional player to the roster: there's hardly anyone hitting better this month.

Going in the other direction, we find the Arizona bullpen. At this point, we do have to hope that the return of Sam Demel and Juan Gutierrez will help stabilize a relief corps which has been found pretty wanting over the last few weeks. Both relievers have been throwing bullpen sessions - Gutierrez has also lost weight. We could certainly use some help, as Esmerling Vasquez retired one of five batters faced this afternoon, and Joe Paterson failed to clean up the bases-loaded situation he inherited, emptying them courtesy of a double to A.J. Pierzynski. Bryan Shaw worked mop-up in the ninth, and got his ERA down to single figures. 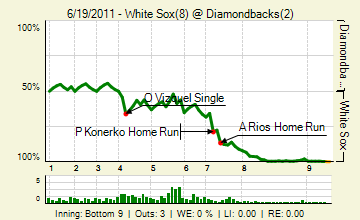 There were only a few green comments. The most rec'd was my pointing out that we are 17-23 when Melvin Mora appears in a game, 22-10 when he doesn't, but protocol precludes me from choosing that one. So we'll give to Dallas D'Back Fan: his assessment of the early proceedings may have been a little premature, but it still made me laugh.

Hello and welcome to Striking Out 101

You may take a seat.