Well, that was fun. Despite the final result not exactly being what we wanted to see - could have used a walk-off home-run in the ninth, like we got last time, it was the usual thoroughly entertaining afternoon. You really can't go wrong, hanging out with a bunch of like-minded individuals. The afternoon started off with a couple of hours spent eating, drinking and being merry at Coach & Willie's - sadly, no appearance from Messrs. Gibson or Bloomquist, much to Jinnah's disappointment. We then headed over the park, and occupied our usual section, behind the D-backs bullpen for the afternoon's game between the Crotalus Atrox and the Niveus Udones.

C&W was certainly an improvement over the previous venue: this was beyond debate as soon as I discovered they had Stella Artois on tap. We'll be back in August for SnakePitFest v4.1. We were located on the outside patio, but with some careful use of umbrellas it proved tolerable enough, even with the temperature above a hundred degrees. The food was also a major improvement too, though anything not off the dollar menu would likely have qualified there. Mrs. SnakePit and I particularly enjoyed the Italian nachos, which were basically nachos made from pizza dough. Add on appropriate topping (sausage, etc) and let the nomnomnom-ing begin.

Mad props to Cole, our server. I don't know what his other duties were, but our section was basically, a waiter's worst nightmare, with people arriving every ten minutes, wanting to place orders for food, drinks and, oh, that will be on a separate tab, of course. He bore it all with good grace, and was a credit to the establishment. That left us able to concentrate on the social aspects, and hand out the game tickets as well, as some wanted to go and pick up the trucker cap giveaway of the day, or drink pre-first pitch at their usual establishments of choice.

SnakePitFest Roll Call? Me + mrs snakepit; soco + mrssoco; Four Corners Fan, kishi and mrskishi; Turambar, edbighead + James;.Battle Moses + Mr. Moses; NASCARbernet + F1bernet; asteroid + mrasteroid; 'skins, jinnah and their two friends from Tucson whose names I managed to miss; Shaun Light + 1; Zephon, emilylovesthedbacks and Mom Zephon. Apologies were accepted from sprankton, who had to cancel late. It was particularly good to put some more faces to names, in particular NASCARbernet, asteroid and Shaun, who bravely attended for the first time. 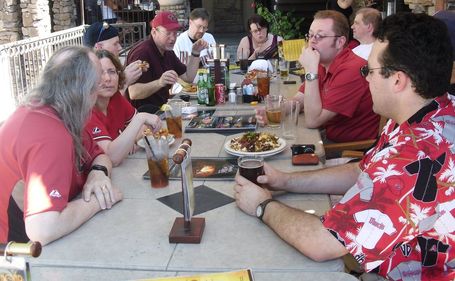 I could, quite happily, have sat there all day [or until they ran out of Stella, whichever happened first], but there was a baseball game to get to. That said, when I saw the line-up included Bloomquist, Nady, Blanco and Mora, it felt like this was a white-flag kind of day, especially with Zach Duke on the mound,. He was about as "meh" as expected, but did keep the team in the game, and left with us only 3-2 down. The key point came in the next inning where, miraculously,. Nady singled and Mora almost cranked his first homer of the year out of the park, to put the tying run on third with one out.

We were cheering ourselves hoarse at this point, but Blanco couldn't get the ball out of the infield, and Micah went down swinging on three pitches, and didn't look good doing so. A three-run homer in the top of the eighth for the White Sox effectively ended any illusion of this being a contest, and Arizona went down pretty meekly. I can't remember off-hand the last SnakePitFest to end in defeat, but it was a disappointing, if not perhaps unexpected loss. The good news is, I'm sitting here keeping an eye on the Giants game, and they're losing too, in the eighth, so we may still remain half a game back.

To my surprise, Juan Pierre was not in left for Chicago, as he has been the vast majority of games - so there went all my carefully planned, Beyonce-themed heckles. The sacrificial lamb in his place was Brent Lillibridge, who was, inevitably the target of much heckling, in particular for having a name like a flower. He made the mistake of looking up in our direction early on, and from that point on, we knew he was ours. I think we can take credit, both for Lillibridge going 0-for-5 in the lead-off spot, and for being unable to hang on to Mora's double at the wall in left. Needless to say, both of those provided useful ammunition too.

Even though our heckling of the left-fielder was entirely PG-rated, this and our persistent cheering for the home team still managed to draw the ire of some idiot in a yellow shirt, who complained that we were "too loud", and that this was "a family-friendly event," so we shouldn't be yelling. Heaven forbid, anyone get loud at a baseball game: I suspect he may have confused Chase with the Phoenix Central Library up the street a bit. No official sanction came to pass, so one suspects he was just being an intolerant jackass. edbigghead was prepared to decide the matter with some fisticuffs, but jinnah sat on his head or something, and war was averted. 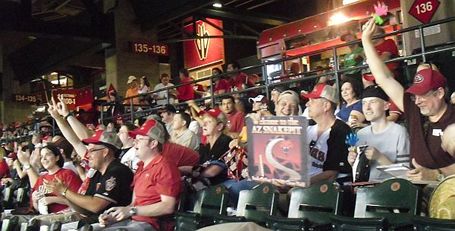 It was, as noted, a great deal of fun. There will be another, similar event later in the season - I think it's August 14th against the Mets - so stay tuned for that. Thanks to Raymond of SB Nation for liaising with Coach and Willies, the venue for their hospitality, Cole for not running amok on us with a fork, Mrs. SnakePit for putting together the goodie bags, and all the attendees for taking the loss and turning it into such a painless and pleasant way to spend an afternoon and evening.