I suppose a good chunk of those out there know exactly how tonight's game went down, as the majority of SnakePit regulars found themselves in Section 136 tonight for SnakePitFest 4.1. Arizona was looking to keep things rolling in the NL West and tie the division up (San Francisco and Oakland are tied at time of writing) while Chicago looked to bounce back from being owned by Daniel Hudson yesterday. Well, it didn't go as well as last night.  It's a bit of a bummer that the game went how it did, but I'm sure it was a blast for all involved (and I expect pictures!). The tl;dr version of the game would be "Duke ok, bullpen the same (until eighth), offense missing". For an expanded version, hit the jump.

After both pitchers breezed through the first, things got a little dicey for Zach Duke in the second. After surrendering a leadoff single to once-a-possible-Diamondback Paul Konerko, Alexei Ramirez drove one in the left-center gap to put men on second and third with no one out. Duke escaped without too much damage, though, allowing just one run by inning's end off of an RBI groundout from Alex Rios. In Arizona's half, Chris Young led off with a single of his own, but an entirely too early jump led to an easy pickoff, something that stung quite a bit more when Ryan Roberts crushed a double to the deepest part of center without scoring a runner. A run just wasn't in the cards for the 'backs in the second, as Xavier Nady lined one right to the second baseman, who doubled off Roberts to end the inning.

Konerko struck again in the third for Chicago with an RBI single that put Chicago up two-nil, while Arizona batted Melvin Mora, Henry Blanco, and Zach Duke (ie, went down 1-2-3). The fourth was a bit scary, more so than "the other team almost scored a run". After Willie Bloomquist led off with a single, you'll see this in the official play-by-play:

Stephen Drew drilled a ball off of the backside of opposing starter John Danks' head, while the ball caromed over to third base and one-hopped into the seats. Somehow, Danks managed to put on a grin, shake it off, and stay in the game. I probably wouldn't have gotten up, but maybe that's why I'm not a baseball player (I swear, that's the only reason). He was probably a bit shaken, though, as a passed ball during the next at-bat scored Bloomquist from third. Justin Upton (the lazy bum) sacrificed Drew home with a flyout to right, while a CYK and Roberts flyout ended the inning - but, hey, it ended with a tie!

The sixth was a bit ugly for Duke: after getting Carlos Quentin to groundout to start the inning, a solo shot from Konerko and back-to-back singles put the stamp on Zach's night, exiting with a "meh" 5.1 innings with seven hits and three earned runs. He only walked one (and struck out two), but I think "meh" is the best descriptor for tonight's performance. Micah Owings came on to pitch in his place and kept the Sox from scoring, getting Ramon Casto to flyout and Gordan Beckham to pop out to second. A whole lot of nothing happened until the eighth, which is mostly good when you're down one and need your bullpen to keep the game tight. After wasting a second-and-third, one-out opportunity in the bottom half of the seventh, Owings was kept in the ballgame for the Diamondbacks. Quentin was hit to open the eighth, and while Konerko was sat down looking, the Ramirez single and subsequent three-run shot from Alex Rios took all of the air out of the ballpark. I hate to be so anticlimactic, but the four run deficit proved to be too much. Hey, at least Aaron Heilman -- who came in for Owings after the homer -- sat down all five batters he faced. 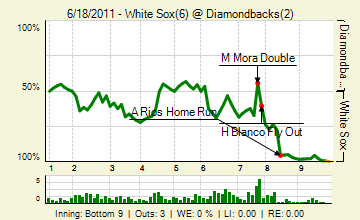 Comment of the Night goes to Dallas, with one that requires little context:

I hate it when a play pops up on MLB.tv

that says "Molina goes yard". That could be for like 4 teams.

Might as well just say "Hernandez makes a great play"

Josh Collmenter takes the mound tomorrow against Chicago's Philip Humber in a rubber match; it'll be Collmenter's first start against the Sox (obviously), and he holds a sparkling 0.81 ERA in games in which he's facing a team he hasn't previously (in his second starts, it's 6.77). I expect muchas fotos del SnakePitFest in the comments, and probably one in the header of the recap. I await everyone's return... until then, more Starcraft. See everyone tomorrow!