Share All sharing options for: Diamondbacks 3, Giants 2: Justin Upton Walks It Off

Maybe they're just in a funk, but it's sometimes hard to believe the Diamondbacks will actually compete with the Giants for the NL West crown.  A great pitching effort was nearly wasted by a lack of offense and a blown save.  What happened to the lock-down bullpen?  Our offense?  The winning ways?  Were they left behind in May?

Luckily for our hopes, Justin Upon wasn't having any of this "doom and gloom" stuff.

The Diamondbacks certainly had their chances to win this game decisively.  Kennedy was en fuego, posting 10 strikeouts, 1 walk, and not giving up any earned runs over 8 innings of work.  The only run given up while he was on the mound was the result of bad defensive work when Miguel Montero made a bad throw in an attempt to get Cody Ross out at third.  Ross was the lead runner in a double steal, and he scampered home for a run when Ryan Roberts couldn't dig out the errant throw from Montero.

Kennedy didn't have much trouble all night, seeing runners in scoring position only in the 5th and 7th innings.  The Giants managed to get runners on third and second with two outs, but Ian cooly induced a lazy fly out from Eli Whiteside to end the threat.

Ryan Vogelsong was good for the Giants as well, taking advantage of an impatient Diamondbacks team.  His lone real mistake was a two run blast by Chris Young.  Otherwise he scattered 6 hits over 6 innings while also picking up 6 strikeouts.

Overall the Diamondbacks offense was sputtering.  The team struck out 12 times over 9 innings (Stephen Drew, the sole out in the bottom of the 10th, did not strikeout), often at completely inopportune times.  Montero was gifted a Upton at second and Young at first opportunity with only one out in the 8th.  His approach at the plate seemed too greedy, however, and he struck out.  Juan Miranda followed suit immediately after to end the threat.

The Diamondbacks squandered another chance in the bottom of the 9th.  JJ Putz had blown the save in the top part of the inning by giving up back to back singles, then a sacrifice fly to Pat Burrell to tie the game.  If anyone watching felt deflated after this moment, the bottom of the 9th did not help matters.  Again the Diamondbacks put someone on immediately.  This time it was Ryan Roberts who singled to start the rally.  Gerardo Parra couldn't get down a good bunt, though, and he replaced Roberts at first on the fielder's choice.  Sean Burroughs was given the chance to prove his worth, but I fear his time in the majors is quickly slipping away.  He struck out, and so did Kelly Johnson to send the game into extra innings.

David Hernandez was called in for fire control, and outside of a walk to Andres Torres, the reliever was in control.  He forced a ground out, fly out, and foul out to give the Diamondbacks a chance to win.

Justin Upton only saw one pitch, and it was one he blistered 401 feet.  As he trotted towards first, he looked to the dugout, at his teammates. 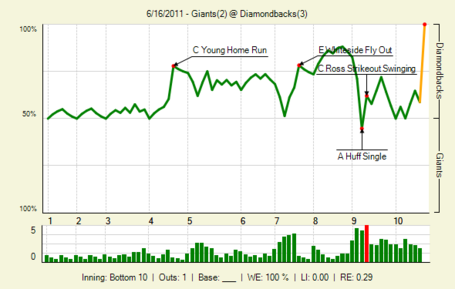 Comment of the Day goes to BulldogsNotZags (despite the unfortunate prediction of the Giants game-tying sac fly): 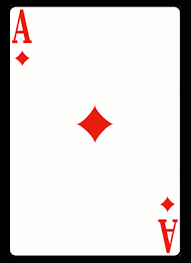 "First of all, Life Sucks. Alright? Period. Done deal. You got it? There's your lesson. Enjoy it."-Coach McGuirk, Home Movies.

So ends another brush with barbarians from the North.  I believe we successfully repelled their invasion, but it was at heavy cost.  The Diamondbacks at least managed to salvage one game from the series and only remain 1.5 games back for the division lead.  They welcome the Chicago White Sox to town starting tomorrow, for the kick-off yet another fun round of inter-league play.  First pitch is at 6:40pm Arizona time, and features former White Sock Daniel Hudson facing off against former Diamondback Edwin Jackson.  We'll see you either this side or the other, unless you're meditating to find your inner peace.