The Giants started the damage off early. Joe Saunders erased a leadoff single with a double play- his twelfth on the year- but things went downhill from there Pablo Sandoval hit a single, Cody Ross drew a two-out walk, and then Aubrey Huff lined a single into left. As we lamented not having the Parrazooka deployed this evening, Sandoval chugged his way around third to score.

To his credit, Joe Saunders calmed down after that. After Huff's hit, he got a third out, and then went through the Giants 1-2-3 in the second and third innings. Unfortunately, the Diamondbacks bats were inconsistent at best. They had two on with one out in the first, and couldn't manage to bring in the run. It wasn't until a Willie Bloomquist home run in the third that they managed to tie it up.

The Giants came right back in the fourth, though, with a leadoff double from Cody Ross scoring on a Pat Burrell triple that took an awful bounce in left field. Chris Young came right back for the DBacks, leading off the fourth with a home run, and the game was tied at two after four. As before, and as it has been all series, the Giants took the lead again in the sixth, with Bill Hall scoring Aubrey Huff from second on a bloop single. Joe Saunders got another double play to end the inning thanks to an interference call on Bill Hall, but the DBacks were trailing again, 3-2.

From this point, the game just got frustrating. Or more frustrating. Arizona had a single and a walk in the sixth to put the tying run in scoring position with one out, but strikeouts from Stephen Drew and Xavier Nady ended that hope. In the seventh, a pinch-hit single by Miguel Montero was erased by an inning-ending double play from Sean Burroughs. And worst, in the eighth inning, Kelly Johnson tried to score on a two-out double by Chris Young, but was easily out at the plate. It took a good bounce for the Giants and two good throws, but it wasn't even close.

Really, the only bright spot in the late game was the defenst in the top of the seventh. A shallow fly to right led to three players converging and Justin Upton coming up with the catch, somehow, and then Joe Saunders caught Aaron Rowand stealing.

And then things got worse. After David Hernandez went through the Giants 1-2-3, J.J. Putz came in to the game in a non-save situation. It was not pretty. He gave up a double to Hall, followed by a triple to Eli Whiteside, and then Whiteside scored on a two-out wild pitch. We headed into the bottom of the ninth down 5-2, facing Brian Wilson. We got the tying run to the plate, thanks to a two-out ground rule double by Ryan Roberts and a walk by Montero, but Juan Miranda grounded out to end it, and the Diamondbacks dropped back another game in the standings. 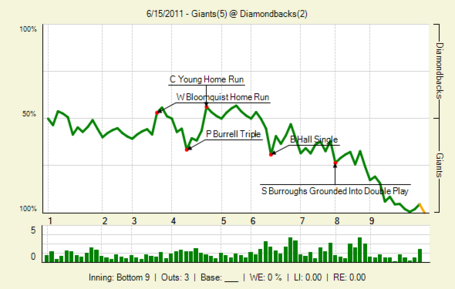 Some disappointing performances from around the team tonight, but Joe Saunders was not one of them. With the team facing a tired bullpen, he gave us seven innings and only allowed three runs. That's a pretty good outing from a guy in the back half of your rotation. Putz's collapse was disappointing, and Stephen Drew and Xavier Nady had pretty bad days at the plate, both going 0 for 4, and Nady had 4 Ks.

Despite that vast list of attendees, only a handful of green comments, so we award comment of the night to Clefo, for this, er, manifesto:

I hate the Giants

So we fall further back in the standings, and we'll have to turn to Ian Kennedy to avoid the sweep tomorrow. The Giants will send up Ryan Vogelson, who I suspect will attempt to thwart our batters by reading them his poetry, before destroying Earth for a new intergalactic bypass. Stop by tomorrow to find out the fate of our planet.... Or don't. Those are pretty much your options.