Share All sharing options for: Diamondbacks 5, Giants 6: "One Morning I Shot an Elephant in My Pajamas. How He Got in My Pajamas, I Don't Know."

Record: 37-31. Pace: 88-74. Change on last season: +11
Firstly, I'd like to let everyone know that I'm on a Groucho Marx binge. With that, I'll be using some of his most famous quotes to help summarize tonight's loss. Be prepared for a bumpy recap. Follow the jump to learn more.

"I never forget a face, but in your case I'll be glad to make an exception."

The D-backs haven't had a good history against Matt Cain. Coming into tonight's game, Cain had a 3.14 ERA in over 120+ innings with 94 strike outs, two complete games, and one shutout against the Diamondbacks. The stats held true to their word through the first four innings as Arizona hitters could only manage a couple of singles and a walk. Even a screeching liner by Miguel Montero in the 4th inning wasn't enough to get a hit. It was looking that sort of night.

Meanwhile, Josh Collmenter was not having as splendid of a day. Collmenter allowed back-to-back-to-back singles to start the game and quickly found himself pitching with a negative lead. After a clean 1-2-3 second inning, he found himself struggling to get batters out in the 3rd and 4th innings. The Giants were all over him, fouling balls off and making Josh work hard for every out. He escaped allowing a couple of walks in the 3rd, but wasn't so lucky in the 4th as Cody Ross scored on a safety squeeze by Matt Cain. Things didn't stop in the 5th inning either as the Giants just kept pouring it on.

"I've got the brain of a four year old. I'll bet he was glad to be rid of it."
With two runs already tacked on in the inning, the D-backs were still searching for the third out. With runners on the corners, Brandon Crawford set his sights on second base, and so did Miguel Montero. Miggy busted a throw straight to second base without ever checking the runner at third and the Giants easily scored their fifth run of the game. 5-0 San Francisco. It was Collmenter's last inning as he left the game with a final line of 5 IP/ 8 H/ 5 ER/ 3 BB/ 4 K.
"Room service? Send up a larger room."
The Diamondbacks finally put their name into the game in the 5th and 6th innings. Ryan Roberts hit a sacrifice fly in the 5th to put Arizona on the board and Miggy made up for his elementary mistake earlier in the game with a 3-run-homer to bring the D-backs within one run of regaining the division lead.

With Aaron Heilman pitching in relief, Nate "how the eff do you spell" Schierholtz stuck it to him with an RBI double in 7th inning. It marked a pivotal moment in the game and proved to be the winning run by the end of the contest.

"Well, Art is Art, isn't it? Still, on the other hand, water is water. And east is east and west is west and if you take cranberries and stew them like applesauce they taste much more like prunes than rhubarb does. Now you tell me what you know."

Sean Burroughs lead off the 7th inning and was quickly disposed of... wait, no? He wasn't? A LEADOFF DOUBLE? Awesome. Meanwhile, after a pair of quick outs by Roberts and Johnson, Upton finally delivered the damage and plated Burroughs to bring the D-backs back to within one run. Stephen Drew grounded out to end the inning and we would ultimately find ourselves in the same position in the bottom of the ninth.

"Next time I see you, remind me not to talk to you."

Brian Wilson started out the ninth inning disposing of Willie Bloomquist on a quick first pitch groundout. Ryan Roberts then battled some but popped out on the 6th pitch. Down to our last out, it was up to the likes of Kelly Johnson, Justin Upton, and Stephen Drew to save the day. Unfortunately, home plate umpire Vic Carapazza didn't feel like staying much longer. As pitchfx shows, Wilson clearly had an expanded strike zone despite showing some obvious struggles to hit his spots. Kelly Johnson managed to convince Carapazza for a walk, and Upton, after battling through 8 pitches, also drew a walk. With Stephen Drew in the box, a wild pitch by Wilson allowed both runners to advance and the D-backs were a basehit away from devastating the Giants. Vic Carapazza had waited long enough, however, and called strike 3 on a pitch just outside of the zone. It's disappointing to lose that way, but Mark Grace is probably right that it was too close to take.

"I've had a perfectly wonderful evening. But this wasn't it." 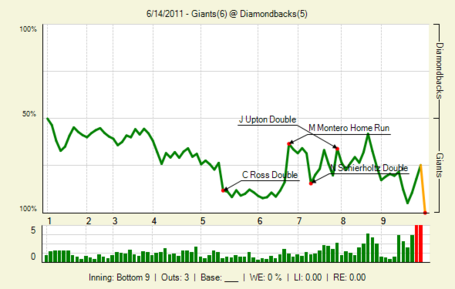 Another thick and heavy GDT with just over 1500 comments among a team of 40 players. Here's the rundown:

COTN goes to no one. Seriously, you guys need more practice. I was not amused.
Tune in tomorrow night, same place, same time, to see Joe Saunders (3-6, 4.56 ERA) face off against Madison Bumgarner (2-8, 3.23 ERA). Saunders allowed three home runs in his last outing against the Marlins while Bumgarner just doesn't know how to win, losing four times despite allowing a run or less. Be there, or don't be there, it's your choice.