The DIamondbacks hoped to get this game quickly disposed of, in order to make a quick exit back to Arizona. Not so fast. A rain delay was only the start of things. By the time the game concluded, just after 11pm Miami time, there had been 30 hits, 13 walks, 21 runs, 95 plate appearances and 41 at-bats with runners in scoring position. Despite having had a nine-run lead, the Diamondbacks subsequently found themselves facing the tying run at the plate in the eighth.

One of those hits was from starter Zach Duke, who clubbed a no-doubter into the right-field bleachers for his second homer of the season. That would be more long-balls in his first five at-bats, than Willie Bloomquist in his 107 this year. Oh, and as many as some guy called "Jeter," whom I have heard might play in New York...

It's never a bad thing when the top two in your batting order come to the plate, not just in the first inning, but also in the second. Then again in the third. And also come to the plate in the fourth. Such was the case in Florida this evening, as the Diamondbacks scored 12 runs by the middle of the fourth frame: at that point, we had 29 PAs, and were 11-for-24 with five walks. But the laugher this one looked to be early on, evaporated as the Marlins took it to Duke and most of the Arizona bullpen. Aaron Heilman and David Hernandez were the only arms not used, which probably isn't what we wanted in advance of a crucial series against the division leaders.

The Diamondbacks took advantage of uncharacteristic wildness from Ricky Nolasco. He hadn't walked more than two in any game this year, but promptly walked Ryan Roberts on four pitches and followed with a free pass to Kelly Johnson. An RBI single to Justin Upton opened the scoring for Arizona, and another single by Stephen Drew loaded the bases for Chris Young, but he struck out down and away [I know: I was shocked, too...] However, Miguel Montero wasted no time, clearing the bases on the first pitch, with a double into the right-center gap. Zach Duke got to bat before he had to throw a pitch, making the final out with Arizona up 4-0.

It was merely an appetizer for the third inning, where the Diamondbacks scored five more, with RBI for Montero, Juan Miranda and Upton. However, the highlight was Duke picking out an 84 mph slider, and depositing it a good eight to ten rows back into the bleachers. That means Duke now has two of the 11 homers hit by pitchers in the majors this year, and along with Barry Enright's, Arizona has three of them. Montero's third double, and singles from Juan Miranda and Ryan Roberts scored three more for Arizona in the fourth, to bring a second helping of tacos for fans, as we reached a dozen runs. Easy cruising, right?

Er, no. While Duke may have been unexpectedly producing at the dish, on the mound, he was startlingly mediocre. After two solid innings to open things, he allowed the Marlins to score three in the third, another in the fourth, and was lifted with two outs in the fifth, three more Florida batters having crossed home-plate. At one point he allowed six consecutive hits - the only thing which stopped the home team from posting a very large, crooked number, was Emilio Bonifacio's ill-advised attempt to challenge the Parrazooka and score from second. Instead, he became Gerardo Parra's fifth outfield assist, and fortunately ended the fourth.

Duke thus didn't even last long enough to qualify for the win. By the time Micah Owings came in and got the final out of the fifth, the Marlins were back to 12-7, and had outhit the Diamondbacks, 13-12. Duke's final line was horrific: 13 hits and a walk, leading to seven runs, all earned in just 4.2 innings of work. The last time a National League starter allowed as many hits in less than five innings, but his team still won? Try over 35 years ago. Back in August 1975, to be precise. Carl Morton of the Braves had exactly the same line as Duke, but Atlanta scored two in the ninth to beat the St. Louis Cardinals. [Carlos Silva did it for the Twins in July 2006 - here's the full list]

Amusingly, despite the damage the Marlins did, Duke didn't actually impact the game all that much. Because he gets credit for the two opening innings, where the game was still (somewhat) close, his overall Win Percentage Added, despite allowing 13 hits and seven runs, was only -1.0%, and that was all but wiped out by his +0.8% at the plate. After Montero's double made it 5-0, the Marlins didn't get the Fangraph needle up above 7% the rest of the way while Duke was out there. It didn't feel that easy though; perhaps we were remembering this game against Florida from July 2009, where we were 7-0 up after five, only for them to score 14 unanswered runs.

A brief respite was provided by Owings, who ended the fifth and was solid in the sixth, keeping the score at 12-7. The seventh got nasty, as he loaded the bases with no-outs - a 15.7% win percentage for Florida - before cleaning it up with a comebacker double-play and a fly-out. The eighth was worse still: Bryan Shaw failed to retire either batter faced; Joe Paterson got a K and a walk; and Esmerling Vasquez gave up a two-run single which meant the Marlins had the tying run at the plate, in the shape of Wes Helms. Vasquez struck him out, and J.J. Putz provided a mercifully stress-free ninth, retiring the Marlins in order.

All told, that was 16 hits allowed by Arizona. No other team in the National League this season, has allowed more than 15 in a regulation game and won. But it's the second time the Diamondbacks has done it - they managed the feat on April 12, vs the St. Louis Cardinals, winning that one 13-8. Which, probably not by coincidence, was also the last time we needed an overflow for the gameday thread. Nervous slugfests like this one give the chattering classes of the 'Pit plenty to chatter about.

It was just very fortunate that the offense had their hitting shoes on, even if the productive side of our offense appears to have packed its bags and caught a cab for Miami International Airport in the middle of the fourth. Every starting position player reached safely at least twice. Ryan Roberts had two hits and a pair of walks, Justin Upton three hits and Chris Young two hits and a walk. However, the offensive star of the game was Miguel Montero, who had three doubles and drove in four runs. Juan Miranda had three RBI, Upton and Duke a couple each. The 12 runs scored was the most on the road for us this year. 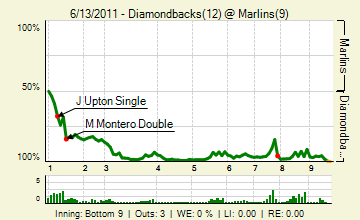 I think we are very close to an all-time record with a round fifty people appearing in the thread, contributing a total of 1,738 comments. Only three were in three figures: txzona led the way (146), DbacksSkins was runner-up (137) and NASCARbernet came third, on 121. Also present...Deep breath:

Comment of the Night? Well, I am under strict instructions not to go with the most rec'd entry - go dig through the threads yourselves if you want to find it. So, instead, we go with Dallas D'back Fan's sardonic commentary on the Marlins' attendance woes.

That could have been dangerous if anyone were there…