Having just assisted the Marlins in ending their recent stretch of losses, Arizona looked today to have Florida return the favor. Entering the game, the Diamondbacks were just a game and a half back (despite losing four of their last five) from first place in the NL West, as Timmeh got throttled by Cincinnati earlier today in a 10-2 rout. Who better for Arizona to send to the mound than their staff ace, Ian Kennedy, especially against the struggling Javier Vazquez? A win would put us just a single game behind the reigning world champions (blech), while a loss would keep things at two. Hit the jump to see how things unfolded... homers and runs and Heilman, oh my!

The game probably couldn't have gotten off to a better start: on just the fourth pitch of the ballgame, Ryan Roberts delivered a chest-high fastball over the left field bleachers (and, if I may an aside -- if a ball lands in the bleachers, and no one's there to see it, did it ever happen?), and the Diamondbacks were out to a very quick 1-0 lead. Let us all take a brief moment to have a hearty laugh about a pitcher giving up dingers to the first batters that they face... alright, done? Chris Coghlan evened the score on just the third pitch he saw, drilling Ian's offering to deep right and resetting the ballgame once more. After that, it appeared to be a marathon of RISPfail, with the teams combining for four runners left in scoring position (and eight strikeouts!) between the first and third innings. The sole run in the span came off of a Logan Morrison triple, scoring Omar Infante from first, an effort that put the Marlins ahead by one.

Then, things started to get fun. Being held to a run through three wasn't exactly the offensive explosion I'd been hoping for -- far from it -- but my fears were quickly extinguished in the fourth. Stephen  Drew led off with a homer, tying the game, then consecutive one-out singles put runners on first and third. While Gerardo Parra couldn't do anything with the situation (he lined out to center), back-to-back walks to Ian Kennedy and Ryan Roberts upped the Diamondback lead to two. The hot-hitting Kelly Johnson strolled up to the plate with the bases loaded and corked one to center (which made Chris Coghlan look pretty silly), tacking three more runs on and putting Arizona up by a score of 6-2. Justin Upton wanted to get in on the fun, too, as he doubled home Kelly for the seventh run of the ballgame (it also proved to be the final nail for Vazquez, who exited with 3 2/3 and seven earned runs). The Snakes didn't stop there, though, as some aggressive baserunning by both Chris Young (who had singled, but advanced to third on a stolen base and groundout and later scored another on a wild pitch) and Xavier Nady (who scored from first on a Parra triple) in the fifth made it a seemingly insurmountable 9-2 game.

The "insurmountability" of the game disappeared about a quickly as Ian's "infallibility" when Gaby Sanchez and Mike Stanton went back-to-back  in the bottom half of the inning, the former of which was hit with a man on first to put Florida within shouting distance. Ian managed to keep his pitch count manageable after that, and, more importantly, buckle down, allowing himself to make it through the eighth inning without surrendering another hit. Bravo, Ian -- this is certainly what you like to see from the guy at the top of the rotation. Even if he's going to give up those five runs, he'll stick around until the ninth and really bear down, saving the bullpen for when it's really needed. Speaking of that bullpen, actually, Aaron Heilman was called upon in the ninth with the four run lead still intact, a lead that can only be described as worrisome with Heilman on the bump. If he was looking to prove himself, he did a pretty terrible job; while the strikeout to start the inning was nice, the two singles given up immediately following were not. However, he forced Coghlan to weakly flyout to left, then got Omar Infante to pop it up on a full count to end the game. Alright, we can breathe now. 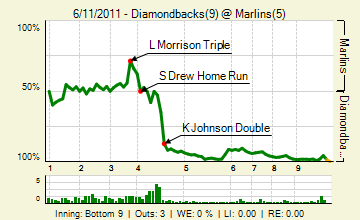 Comment of the Night goes to BulldogsNotZags. I'll leave it up to you to determine your worth as a Diamondbacks fan -- you pass if you can guess who's being referred to.

I wouldn't trust him to mop up my kitchen.

Let alone in a baseball game.

Arizona looks to take the lead in the series tomorrow after knotting it up at one today. The game starts at 10:10 AM (I'll probably end up going to sleep somewhere in that general neighborhood), as Dan Hudson looks to outduel the guy replacing Josh Johnson Brad Hand. Go team!