Much as we can discuss the weird strike zone, struggles from Esmerling Vasquez, or offensive meltdown in the eighth inning, today was pretty much defined by a rough outing - or, more specifically, a rough inning - from left-hander Joe Saunders.  After dropping two of three games against the Pirates, we all had hopes that we would leave our offensive futility behind in Pittsburgh.  Although we managed to succeed in that department (after six more innings of suck to begin the game), it proved to be irrelevant as the Marlins bats were alive tonight.

Saunders started the game on shaky footing, giving up a double to the no longer completely futile Emilio Bonifacio, who proved himself to be quite the snake-killer today.  After a slick play from Colonel Joe to prevent Omar Infante's sacrifice bunt from being a bunt single, Joe served up the first of three home runs he would allow in his six innings of work as Logan Morrison put one in the right-field bleachers.  Just like that, the D-backs were down 2-0, and with Anibal Sanchez dealing on the mound early, things were not looking optimistic.

All would be calm for another four-and-a-half innings of work, with Saunders eeking out of jams and Sanchez not bothering to get into jams in the first place.  Then came the bottom of the sixth inning, and within three batters Saunders had allowed a single and another pair of home runs - to Mike Stanton and John Buck - to extend the Marlins' lead from two to five runs.  What looked like a potential quality start at the end of the fifth inning was now an undeniably poor outing from Saunders, and the D-backs were staring at a five-run deficit with nine outs to play with.

It took just three of those outs for Arizona to cut the deficit dramatically, courtesy of some extra-base pizazz from the good guys in the top of the seventh inning.  After a Kelly Johnson flyout, that lazy bum who gives up on games Justin Upton tripled down the first base line, setting up a Stephen Drew RBI single.  Two batters later, Miguel Montero leaned on a fastball and launched it onto the tarp in center field, ending Sanchez's night and bringing Arizona within two.  Lefty reliever Mike Dunn was brought on to face Juan Miranda, but Gibby countered with Xavier Nady to work a platoon advantage.  The move worked out fantastically, as Nady crushed yet another home run the opposite way, and suddenly the D-backs were down just one run.

On came Vasquez, whose wildness was his own demise.  A lead-off single to Infante was followed by a walk, putting a runner in scoring position, which Buck would single in on a hanging center-cut curveball before Vasquez could get out of the inning.  The depression would continue into the top of the next inning, as Arizona couldn't bring home Ryan Roberts from third after a lead-off triple.  Ryan Webb and Randy Choate combined to strike out the side, getting KJ looking, then Upton and Drew swinging.

You could feel the Arizona comeback balloon deflate with that last out.  Sure enough, after a wobbly - but scoreless -inning of work from Bryan Shaw in his big-league debut (after Joe Paterson allowed a lead-off double), rookie Steve Cishek came on for the ninth - regular closer Leo Nunez was unavailable for the night - and worked arout a single from X to get the last three outs, closing out the game.

Tonight's FanGraph below to show you just how not-close this game was from the very beginning: 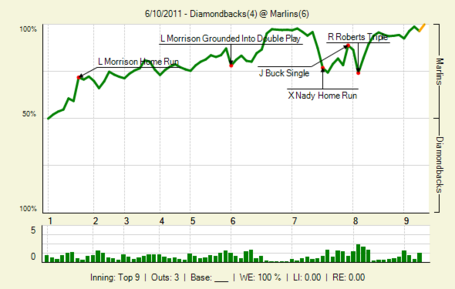 Yeah, this one was pretty sad all around.  Here's a CotD from Clefo, mostly because I would love to know what a "GORRAM CROSSWALK" is:

The ones that jaywalk five feet from a GORRAM CROSSWALK THAT YOU CAN PRESS A BUTTON AND CARS AREN’T ALLOWED TO HIT YOU ANYMORE. IT’S MAGIC LIKE THAT TEEVEE BOX THAT YOU INVARIABLY USE TO WATCH MAURY POVICH (SPOILER: HE IS THE FATHER) AND EAT CHEETOS ALL DAY AND IGNORE CHILD SUPPORT PAYMENTS.