Share All sharing options for: Diamondbacks 2, Pirates 0: No Buc Brooms

The Diamondbacks and Pirates engaged in a true pitcher's duel today, and as so often seems to happen, neither offense could accomplish much until both starters had left. Rookie tomahawker Josh Collmenter continued his awesome streak, though the offense came too late to give him the win. Kirk Gibson made a few changes from last night's game; but Melvin Mora continues to singlehandedly attempt to sink this season's ship. (Still on the Rockies' payroll, perhaps?)

Very nice to prevent a Pittsburgh sweep and snap our 3 game losing streak, though. Details after the jump.

Josh Collmenter was once again, in a word, awesome. Despite throwing 102 pitches through 5+ innings, he continued to pound the strike zone, 66 going for strikes. Collmenter DID walk two batters in a game for the first time since May 24th, but he also struck out four, and generated 8 ground balls without a single line drive. Jeff Karstens for the Pirates matched him pitch for pitch, going 7 innings with only 77 pitches and only giving up two liners and a similar ratio with 1 walk to 2 strikeouts.

Justin Upton's 2 out double in the 1st was wasted, but the Pirates lost an even better opportunity in the bottom of the inning. With two outs, Andrew McCutchen drew a walk and Neil Walker singled up the middle, sending him to third. Former Dback Lyle Overbay, however, gave the team that developed him a break, striking out to end the inning. It was the last time the Bucs would get a runner to 3rd.

In the 2nd, after Xavier Nady struck out, Miguel Montero drove a double into right field. Showing just how much respect the Pirates have for our bench, after pitching to Mora (who rewarded their faith by making an out), Karstens intentionally walked Gerardo Parra to get to Collmenter. Scoreless inning.

After a 1-2-3 bottom of the 2nd, a leadoff Chris Young single in the 3rd was erased by a ground ball off the bat of Upton. Another doughnut in the bottom of the 3rd, despite a walk by Jose Tabata and stolen base by Xavier Paul.

Collmenter buried a single within 3 flyouts in the 4th, and did the same in the 5th with a strikeout and two grounders. In the 6th, Josh gave up a leadoff single and was replaced after 102 pitches by Joe Paterson, who rolled up a double play to erase Andrew McCutchen and keep it a shutout, no thanks to Mora, who allowed Overbay to reach on his error with two outs. Meanwhile, Karstens was perfect from one out in the 2nd until two outs in the 7th, when Miggy broke up the streak with a single. It couldn't have come at a worse time, however, with Nady (flyout) batting in front of him and Mora (groundout) batting behind.

Micah Owings came in in the 7th and pitched around a leadoff single and one out walk to preserve the shutout.

Last night, after pitching just 2/3 of an inning, Micah was pulled for pinch hitter and 25th man Sean Burroughs, who, predictably, made an out. Perhaps Gibson learned from his mistake, since Micah was allowed to hit for himself with one out in the 8th. And "hit" he actually did, hustling hard on an infield single to the shortstop. Karstens had just been pulled without allowing a run, despite only throwing 77 pitches, and Chris Resop didn't do much to keep the score there. I kinda wonder what Clint Hurdle was thinking here. Anyway, CY, who was batting leadoff today, followed it up with a home run to left field on a 2-0 count that JUST stayed fair. (Seriously -- we're talking mere feet) Justin Upton's single and Stephen Drew's walk tried to add on, but then Nady happened.

Micah pitched the 8th and struck out two Bucs around a walk, and Willie Bloomquist pinch struck out in the 9th after Parra singled. David Hernandez produced the 1-2-3 inning that was missing two nights ago for his 4th career save, and the Dbacks had snapped the streak.

As already noted, Collmenter pitched 5 rounds of shutout baseball with 4 Ks. Micah pitched two and a third, also with 4 Ks, along with two walks and a hit, earning the win. Hernandez and Paterson both retired every batter they faced. The shutout was a team effort, and it was nice to see Collmenter, Hernandez and Paterson all throwing up goose eggs. Let's revisit: Joe Paterson allowed 5 runs, all earned, two outings ago, after previously only allowing 1 all season. (That came with an assist from the umpire, naturally -- and Paterson didn't allow a run last night, but only faced a single batter) Hernandez doubled his season earned run total on Tuesday, giving up 5. Collmenter's last outing was a shutout as well, but before that, he'd yielded 7 runs in his previous two starts. (Four earned)

After being the would-be heroes last night, Drew and Kelly Johnson started again but combined to go 0-8. That having been said, I think we can cut them a little bit of slack. Xavier Nady and Melvin Mora, on the other hand, also went 0-8 and showed exactly why they're unlikely to get more starts. CY, Upton and Miggy all had two hits, though, and Drew and Parra both drew walks. (Parra's was intentional) No Pirate had more than one hit, and the Dbacks outhit them 8-5. 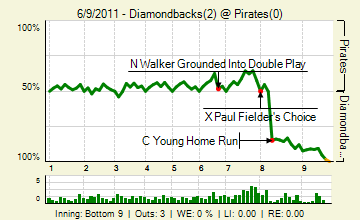 David Hernandez, at +9.5%, and Xavier Nady, at -9.8%, barely missed out on being a GT500 and Pinto respectively. FanGraphs doesn't include defense in WPA in any meaningful way, but the baserunner from Mora's error added 3.6% WP for the Pirates, so let's just put him down for -15.1%. Mora's defenders (IHSB?) would argue that we're unfairly piling on, and it's true. It's also, however, tough to have sympathy for a guy that, coming into this game, had cost the team nearly half a win so far. (-0.4 fWAR) I'm so totally stoked to see what it'll be tomorrow.

Comment of the Day goes to Clefo, for one that was clearly posted before Chris Young's bomb: (Not that it changed much -- 2 runs? Ugh...)

Next stop: Florida, where the Dbacks take on the Marlins. Would be nice to replicate the previous series' result, where we took two of three from them in Phoenix.